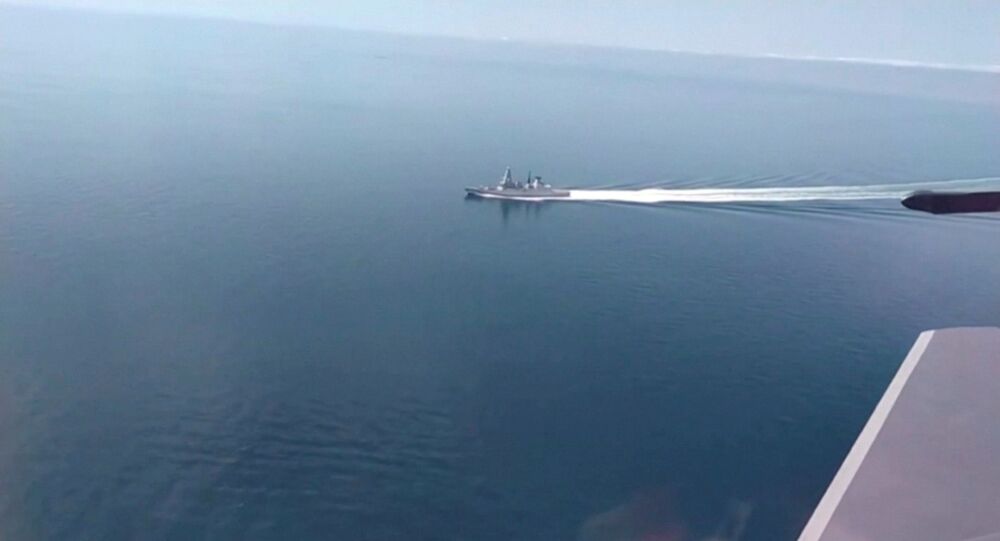 A Royal Navy Daring-class destroyer veered into Russian waters off Crimea on Wednesday and ignored warnings from the Russian military to leave the area immediately, prompting a Russian vessel and a Su-24M fighter jet to fire warning shots. The UK Defence Ministry denied the incident took place, but a BBC correspondent onboard the ship confirmed it.

Russian Deputy Foreign Minister Sergei Ryabkov has come up with a new name for the HMS Defender following Wednesday’s incident.

“I propose that the Royal Navy think about renaming the ship from ‘HMS Defender’ to ‘HMS Aggressor’,” Ryabkov said, speaking to reporters on the sidelines of a security conference in Moscow on Thursday.

Emphasising that those trying to test Russia’s military were “taking a great risk”, Ryabkov warned that Moscow would “repulse the aggressors” and continue to “stand guard over the inviolability of our borders and protect our territorial integrity”.

The official said that in addition to censuring Wednesday’s “provocation”, Moscow “condemns the increased activity of the armed forces of the United Kingdom, the United States and a number of other NATO countries in the immediate vicinity of our borders”.

© Sputnik / Sergey Ilyin
Putin Says NATO Keeps Building Up Military Near Russia's Borders and Continues to Reject Dialogue
As for the UK’s claims that the HMS Defender was carrying out “innocent passage through Ukrainian territorial waters” off Crimea, Ryabkov stressed that the “question of Crimea’s ownership was closed once and for all in 2014, when the residents of the peninsula and the residents of the city of Sevastopol made a free choice in favour of returning to their homeland – the Russian Federation.”

Also on Thursday, Russian presidential spokesman Dmitry Peskov said Russia would be working with the UK side through diplomatic channels to address the incident, rather than involving international organisations over the situation. "You know that there were contacts with British diplomats, and therefore, of course, through diplomatic channels, Russia will do what it should in this situation," Peskov said.

Pirates of the Black Sea

On Wednesday afternoon, the Russian Defence Ministry announced that a Russian border patrol vessel fired warning shots after the HMS Defender violated Russia’s maritime borders off Crimea in the Black Sea. Along with the naval manoeuvres, a Su-24M attack aircraft carried out a mock bombing run against the British warship.

Britain’s Ministry of Defence initially denied that any incident took place or that any warning shots were fired, saying instead that its ship was carrying out “innocent passage” through the area “in accordance with international law” and that Russian forces were simply “undertaking a gunnery exercise” nearby.

Also Wednesday, the Russian Defence Ministry provided evidence to support its side of the story, releasing footage of a Russian Su-24M flying over and tracking the HMS Defender as a flourish of other ships and aircraft operated in its vicinity.

Late Wednesday, Russian Foreign Ministry spokeswoman Maria Zakharova urged British authorities to get their story straight, suggesting that the UK’s MoD, the BBC and the British Embassy in Moscow all provided Russia with conflicting and contradictory accounts of the Black Sea incident.