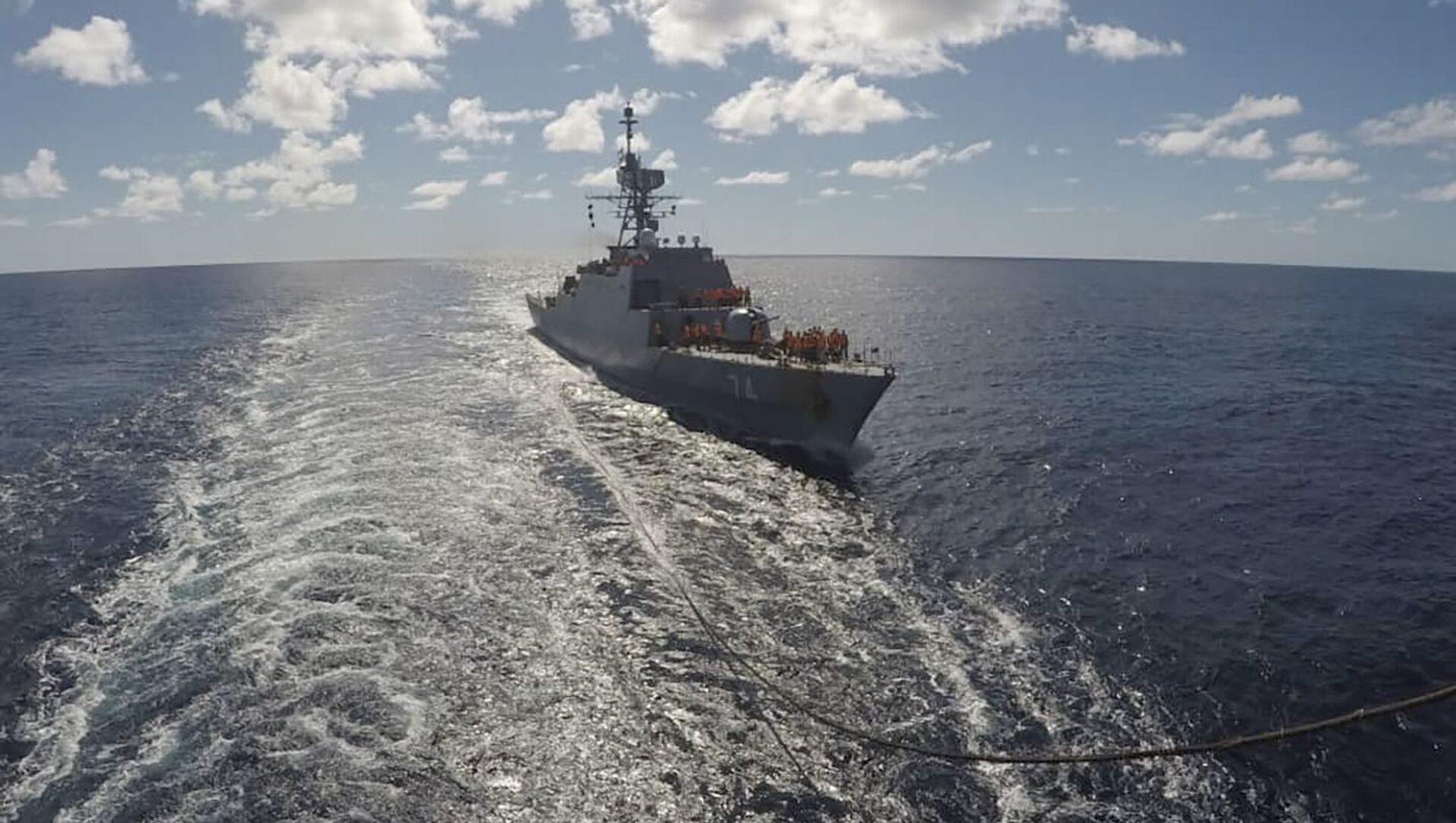 Tim Korso
All materials
The US earlier expressed concerns regarding media reports about two Iranian warships in the Atlantic Ocean possibly trying to deliver weapons to Venezuela. The online publication Foreign Policy noted, however, that Washington's options to legally stop them are severely limited.

One of the two Iranian Navy warships sailing through the Atlantic Ocean might be carrying up to three million gallons of fuel for Venezuela, Maritime expert Sal Mercogliano has told the Daily Mail. Mercogliano came to this conclusion by studying satellite images, obtained by USNI News, of the Makran - a retrofitted military oil carrier that showed the vessel sailing low in the water and possibly transferring to the second Iranian ship, Sahand.

"She is loaded down to the gills. She is obviously loaded with fuel but much more fuel than what's needed", Mercogliano suggested.

Oil or fuel is not the only ware that Makran is suspected of carrying to Venezuela – its alleged, but still unconfirmed, destination. The Daily Mail cites another set of satellite images, captured by Maxar Technologies, as showing signs that the retrofitted carrier is also loaded with at least seven fast-attack boats alongside the purported shipment of fuel.

The Iranian Navy actively uses such high-speed vessels capable of manoeuvring around larger warships and carrying out strikes against them using machine guns and rockets.

When it comes to fuel shipments from Iran to Venezuela, the two countries have already engaged in such operations in the past. Tehran sent several tankers under its flags to help Caracas cope with the petroleum shortages in the country. All of them successfully reached the nation's shores. Yet, the US claims to have intercepted several ships sailing under non-Iranian flags but purportedly carrying Iranian fuel for Caracas. Tehran denied owning the intercepted petroleum, but condemned Washington's attempts to intercept such shipments as state piracy.

US Worried About Possible Arm Shipments to Venezuela

While all these reports remain unconfirmed and Iran is dodging questions regarding the two ships' mission in the Atlantic, the US has already expressed concerns regarding the nature of the endeavour. US Defence Secretary Lloyd Austin said he was worried that the Iranian warships might be delivering weapons to neighbouring states. A Politico report cited an anonymous American official as claiming that Washington believes these weapons were bought by the Venezuelan government of Nicolas Maduro.

At the same time, the US has so far been less than forthright about its plans concerning the reported Iranian arms shipment. US State Department spokesman Ned Price hinted that the White House is ready to act in response to attempts by the countries to trade weapons that allegedly violate "international obligations".

"We're prepared to leverage our applicable authorities, including sanctions, against any actor that enables Iran's ongoing provision of weapons to violent partners into proxies", Price said.

It is unclear, however, what violation an arms shipment from Iran to Venezuela would constitute – there have been no UN approved bans on weapon sales to Caracas and the one that used to affect Tehran expired last year.

Even if the US were to decide to stop the alleged arms shipment by Iran, it would have no option of doing so without violating international laws and would risk facing consequences for doing so, Foreign Policy (FP) noted in a recent article. The media outlet stressed that the Iranian Navy's ships are protected by sovereign immunity and Washington can only take action in the event of a direct threat by them in American territorial waters. The Iranian vessels, however, are nowhere near the US coast and any attempt to stop them risks triggering international condemnation and reciprocal actions against American warships, FP noted.