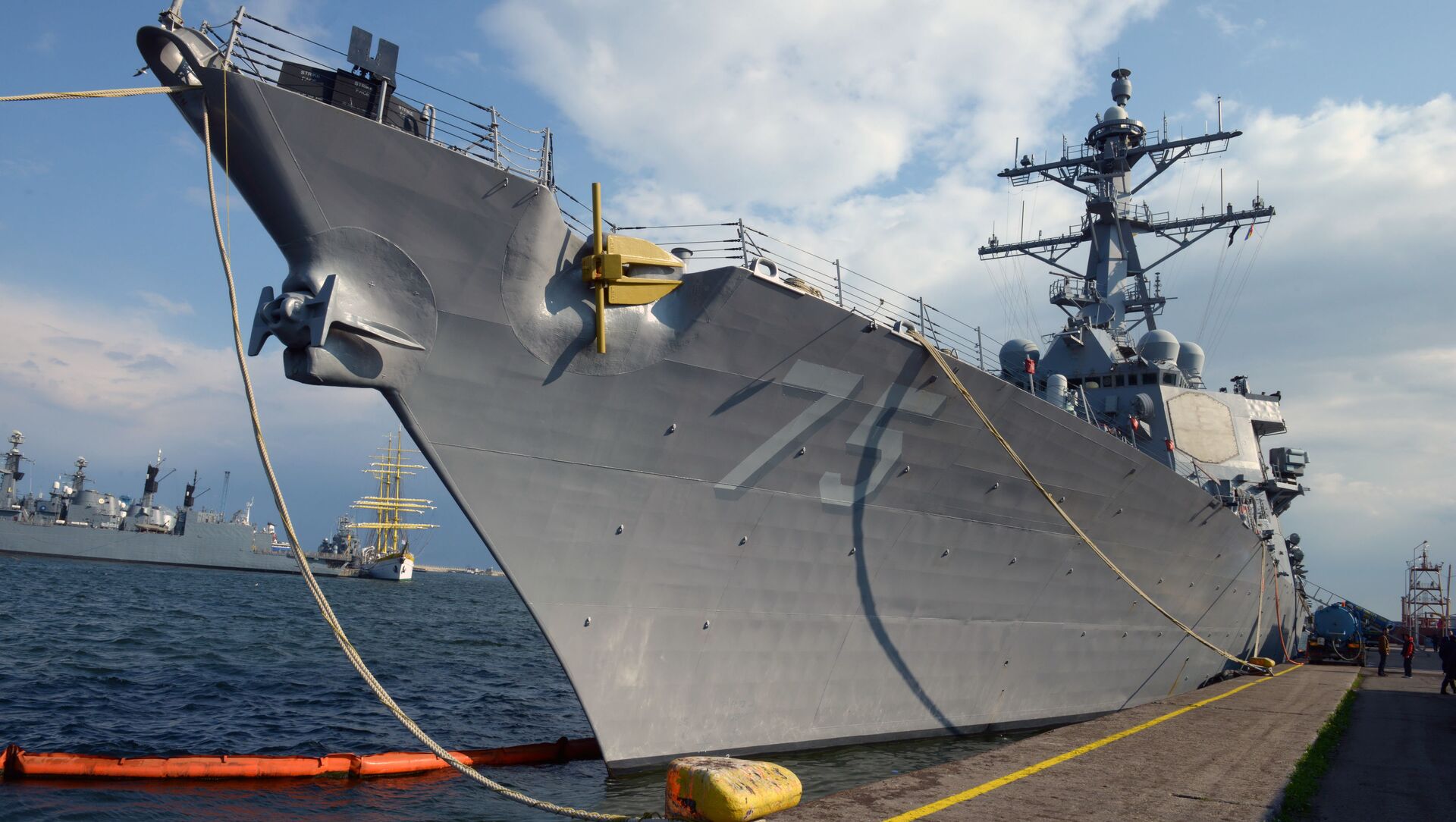 Ilya Tsukanov
All materialsWrite to the author
The United States abruptly canceled the deployment of a pair of Tomahawk-armed Arleigh Burke-class destroyers into the Black Sea late Wednesday, several days after announcing plans to sail them into the body of water. The deployment was canceled after Russia’s Black Sea Fleet started large-scale drills involving Kalibr-armed warships.

The United States military canceled plans to send the USS Roosevelt and USS Donald Cook missile destroyers into the Black Sea due to fears that the deployment might "provoke" Moscow, Politico has reported, citing two officials said to be familiar with the plans.

One of the officials told the outlet that the ships’ deployment was "not unusual" and was not meant to send any particular new signal to anyone, but added that a decision was made to scrap the transit to "avoid needlessly escalating" tensions over Ukraine.

World
US Notifies Turkey of Cancellation of Passage of 2 Warships Through Bosphorus, Turkish Source Says
The unnamed official also insisted that the calculation on Russia was just one out of a “myriad” of reasons why the deployment was canceled.

Earlier, Turkish Foreign Minister Mevlut Cavusoglu confirmed that the passage of the US destroyers through the Turkish Straits had been “cancelled,” and informed Washington that it has three more days to use the existing notification.

Asked to comment on the situation involving the warships, the Department of Defence told Sputnik that it was not willing to discuss reports about the cancellation of their deployment. A Turkish Foreign Ministry source told Sputnik Wednesday that the US Embassy had notified Ankara that it scrapped the deployment. No reason was given.

The ships’ stay in the Black Sea, originally intended to take place between 14-15 April and 4-5 May, was abruptly canceled after a large detachment of ships from Russia’s Black Sea Fleet, including a Kalibr-armed frigate and two similarly-armed corvettes, took to sea to carry out artillery fire drills alongside a hovercraft missile ship, a minesweeper, several landing ships, helicopters, and aircraft.

In the past several years, the US regularly deployed warships in the Black Sea as a show of force to Russia and a "demonstration of support" to its Kiev client state. However, these deployments have often been accompanied by incidents involving Russian warships and aircraft. Russia’s Black Sea Fleet is known to track the activities of US and other NATO warships from the moment they enter the body of water until they leave

In late January, the USS Donald Cook’s “routine” sail through the Black Sea was interrupted after a Russian Sukhoi Su-24 fighter jet buzzed the warship. The Pentagon complained that the “unnecessary proximity” of the Su-24 to the US ship, and called the flight “inconsistent with good airmanship and international norms and standards.” The Russian military maintained that it followed strictly all existing rules on the use of international airspace.

The USS Donald Cook especially is no stranger to unpleasant encounters with Russian planes. In 2014, a Su-24 reportedly turned the vessel into a "sitting Donald duck" by flying by and deploying electronic jamming equipment which disabled the vessel’s radars, control circuits and communications systems. US state media denied the claims that the incident ever took place, suggesting that it was an elaborate “Russian propaganda trick.”

Ukraine’s Ambassador to Germany Says Kiev May Have to Build Nukes If It Can’t Join NATO
This week’s incident involving the destroyers comes amid a surge in tensions between Russia on one side and Ukraine and its US and European sponsors on the other. In recent weeks, authorities in the self-proclaimed Donetsk and Lugansk republics in eastern Ukraine have accused Kiev of launching unprovoked artillery and sniper attacks along the line of contact, and of building up tanks and other units for a possible large-scale offensive. Kiev and Washington blamed Russia for the provocations, and accused Moscow of building up forces on its western borders. Russia has called on the West to stop turning Ukraine into a potential “powder keg” by supplying it with weapons, and have asked Kiev to stick to the Minsk ceasefire.
Newsfeed
0
Access to the chat has been blocked for violating the rules . You will be able to participate again through:∞. If you do not agree with the blocking, please use the feedback form
The discussion is closed. You can participate in the discussion within 24 hours after the publication of the article.
To participate in the discussion
log in or register
loader
Chats
Заголовок открываемого материала