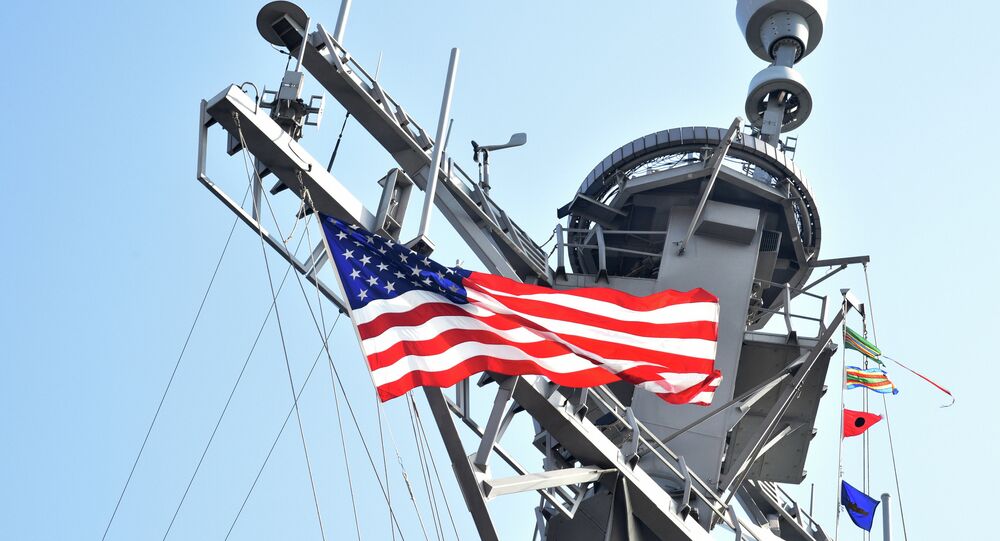 The near-hysterical American reaction to Russian fighter planes buzzing a US destroyer this week is replete with hilarious double-think.

© REUTERS / US Navy/Handout via Reuters
'Aggressive': Pentagon Decries 'Simulated Attack' by Russian Jets in Baltic
Russian warplanes made the USS Donald Cook look more like a sitting Donald Duck bobbing helplessly on the Baltic Sea when they streaked by the vessel. The dramatic face-off followed by the appearance of US impotence is probably what underlies the angry reaction in Washington.

It's the equivalent of getting caught in a spotlight with your trousers around your ankles.

But put the incident in a more serious, objective perspective and the American hysteria says more about their subjective and dangerous arrogance than about alleged Russian recklessness.

A US guided-missile destroyer only 70 nautical miles from Russian territory at Kaliningrad is given a stern display of aerobatics by two Sukhoi Su-24s — and then Washington erupts with accusations of being harassed by an "insane flyby".

The White House was full of indignation over "reckless Russian provocation", while the Pentagon was outraged that one of its ships could be literally rocked in the Baltic Sea by the wake created by the low-flying Russian warplanes.

© REUTERS / US Navy/Handout via Reuters
Su-24 Pilots Swerved Away From US Ship Observing All Security Measures (VIDEO)
Let's run that scenario in reverse to highlight how "American exceptionalism" has become a chronic condition of irrational double-think. If a Russian warship was to approach the US coastline in similar fashion — even if theoretically in international waters — we can be sure that US fighters jets would be scrambled and forcefully deployed. The Russian ambassador would also probably be summoned in Washington.

However, unlike Russia, the US warship this week comes on the back of a massive military build-up by American forces and their NATO allies around Russian territory over the past two years — in flagrant violation of past agreements, such as the Russia-NATO Founding Act.

Moreover, senior Pentagon officials, including Defense Secretary Ashton Carter and his Joint Chiefs of Staff, have over the same period repeatedly labelled Russia as an existential global threat. Without providing any credible proof against Russia, those unilateral assertions are in themselves acts of American aggression.

Western news media have consistently reported this baleful background of patent US-led NATO aggression towards Russia as if it is somehow acceptably normal. Or worse, that increasing US militarism on Russia's borders is a necessary "defensive response" to alleged Russian hostility towards Europe. This is a vicious cycle of insanity and propaganda barreling towards conflict.

On the presence in the Baltic Sea this week of the USS Donald Cook, Western media reports said it was engaged in maneuvers with Polish aircraft. The tone of innocent normalcy is belied by an admission in the US-based military affairs publication, Defense One.

Referring to the incident between the American warship and the Russian fighter jets, the journal quotes a US official as saying: "The US military has witnessed an increase in Russian submarine activity in the region over the last 18 months — the most US officials have seen since the end of the Cold War… As a result, the US has increased its surveillance of those subs. The rise in sub-hunting operations could explain why the Russian military responded so aggressively to the [USS Donald] Cook."

Note how Russia is impugned for an increase in submarine activity — in its coastal waters. That's somehow presented as aggression. More significantly, the US official quoted then goes on to admit that American vessels — thousands of miles away from their territory — are engaging in "sub-hunting operations" off the Russian coast.

This is the real context in which the close-encounter incident this week should be appraised. US military build-up, relentless belligerent rhetoric and now naval operations targeting Russian vessels that are patrolling the sea adjacent to their territory. How provocative can you get?

Russia's military forces were therefore well within their legal right to send the Su-24s to impart a warning to what is an invasive American warship and irrepressibly truculent American mentality.

Two years ago, the very same US vessel was similarly intercepted by Russian warplanes, that time in the Black Sea. Again, on that occasion the USS Donald Cook was also made to look like a sitting Donald Duck when the Russian aircraft reportedly deployed the latest electronic-jamming equipment to disable the ship.

This week US Secretary of State John Kerry huffed and puffed that the American warship could have fired live missiles at the circling Russian jets. In your dreams Mr Kerry.

© AP Photo / Lolita C. Baldor
US Sends Warplanes, Troops, and Ashton Carter to South China Sea
While the US was caught marauding near Russia, what should have been reported as another glaring anomaly emerged this week when Washington announced that it was stepping up military naval exercises in the South China Sea. In this scenario, alleged Russian aggression is substituted with alleged Chinese aggression.

Already, the US has over the past year made provocative breaches of China's territorial waters and airspace under the seemingly guileless pretext of "freedom of navigation". Those provocations are set to increase, and Washington says so with blithe self-righteousness.

Again, the Western media perform the numbing, sanitizing service of presenting Washington's conduct in the South China Sea as an act of normalcy, or even chivalry.

As with Russia, American forces thousands of miles from their home bases have the self-ordained right to interfere with China's national interests and station offensive capability within striking distance.

Then when these American forces are challenged, up go Washington's arms in shrill protest. It is tantamount to a burglar being nabbed in the garden of a house — and him turning around and stamping his feet on the lawn with petulant howls of "that's not fair!"

Washington's arrogance, hubris and roguery from decades of criminal warmongering and violating international law with impunity has produced a dangerous, sociopathic condition of chronic double-think.

The ludicrous US behavior and self-righteousness is, to be sure, laughable at one level. Nevertheless, the trouble is that this unhinged reasoning reinforces Washington's criminal recklessness to the point where all-out war is moving from possibility to probability.

The mouth-foaming apoplectic reaction from Washington this week over Russia's warning to its sub-hunting warship near Russian territory is a clear illustration of how irrational US power has become.

Fortunately, however, Russia has developed the best in military technology and defenses to check what is considered to be top-notch American weaponry.

For any sign of weakness in an opponent would otherwise result in the incorrigibly arrogant American bully exploiting it to the hilt. History shows that generally it is only weak countries that US power attacks — and even then oftentimes comes off worse.

Russia's display of firepower this week is an important reality-check that, if pushed, the US will be like a sitting duck. Hence the cackling and quackery that ensued out of Washington.