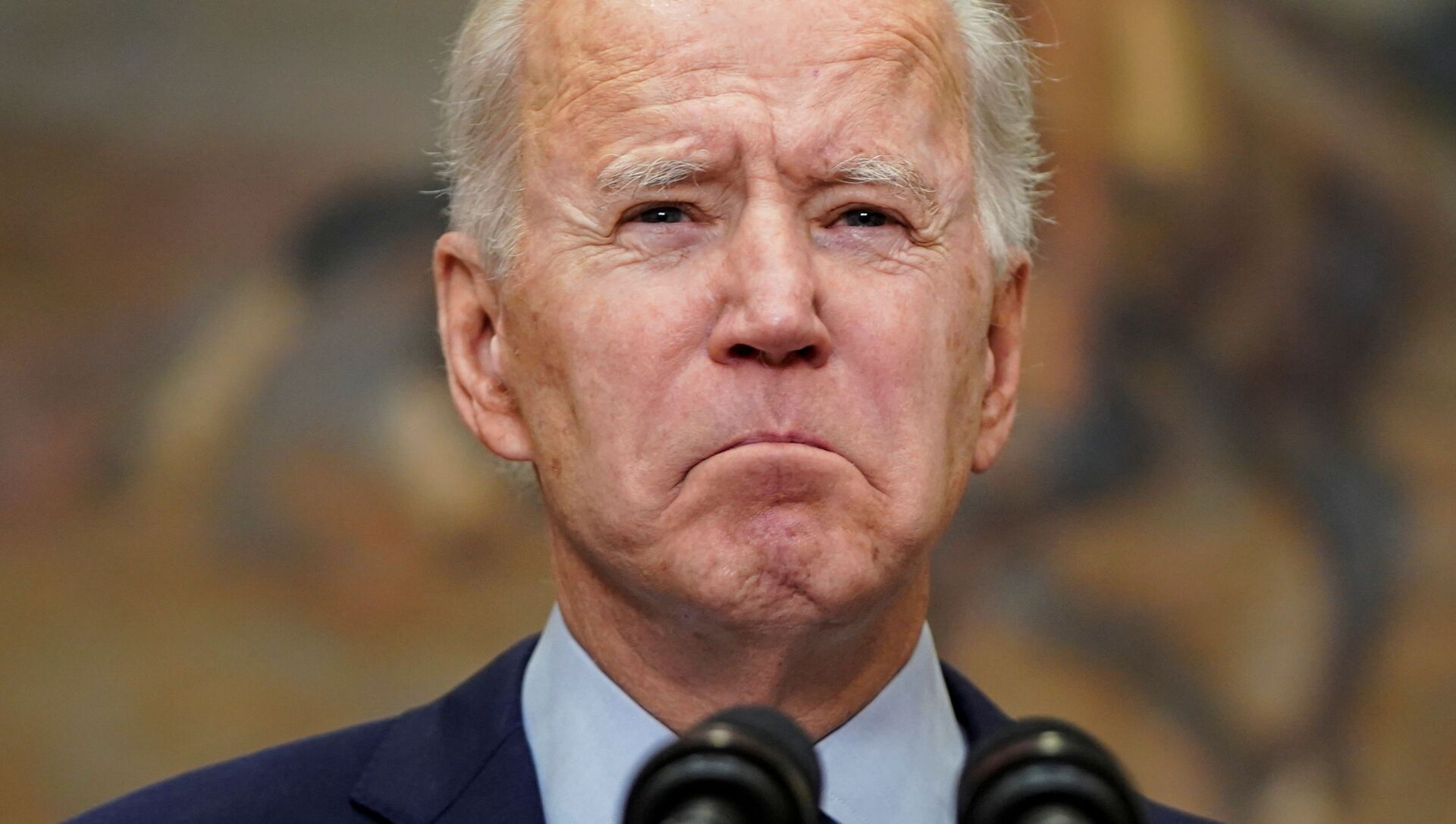 © REUTERS / Joshua Roberts
Subscribe
Mohamed Elmaazi
All materialsWrite to the author
US President Joe Biden recently launched airstrikes in Syria, claiming that they were in response to attacks on US-led occupation forces within Iraq. In a detailed interview, Iraqi sociologist Sami Ramadani explains that if the current trajectory of US policy doesn't change, it may lead to "war with Iran".

Sami Ramadani is an Iraqi-born lecturer in sociology and writes on Middle East current affairs. A political exile from Saddam Hussein's Iraq, Ramadani nonetheless campaigned against US-led sanctions as well as the invasion and occupation of the country. He is a member of the steering committee of Stop the War Coalition.

Ramadani spoke at length with Sputnik about the consequences of the US-led invasion and occupation of Iraq and challenged some misconceptions regarding the nature of the resistance to the foreign military presence there. He also explained that an improvement of America's foreign policy towards Iraq will be shaped by whether US President Joe Biden ditches his original plan to carve the country up into three separate ethno-religious statelets, with a weak central government.

Sami Ramadani: The current situation in Iraq still relates very strongly to the invasion and occupation of the country in 2003. And [this] month marks the 18th anniversary of the invasion and occupation of Iraq. As your readers would know, probably, over a million Iraqis lost their lives in that invasion. Aside from the destruction to life, there was enormous destruction to the economic infrastructure of Iraq.

US Adviser: We Destroyed Iraq, It's Our Responsibility to Fix It
To make matters even worse, the occupation erected a political edifice supportive of its presence in Iraq. So that political edifice sustained the destruction at all levels: social, economic, security. Everything was done to prolong the presence of the occupation, [rather than rebuild the country]. Therefore, every other aspect of social, economic and political life in Iraq suffered enormously.

And this has been more or less a continuing scenario with some very important developments. So, it hasn't been just a straight line of US occupation and destruction. There has been resistance, and the resistance has borne fruit at many different levels. Most of [the US] presence in Iraq was ended by 2011.

So, from 2003 to 2011, you could say Iraq was fully occupied, even though we had a so-called Iraqi government, but really the US armed forces were running the shop. After 2011, things have changed. Most of these forces withdrew from Iraq and this allowed for a space to emerge. They did not withdraw voluntarily, although they signed an agreement to do so, but they were forced to do so because of the rising tide of armed resistance, economic resistance, psychological, social, at every level, Iraqi society was rebelling against the occupation. So, they had to withdraw 90 percent of their forces.

Sputnik: How has this reduction of US forces changed facts on the ground?

Sami Ramadani: Obviously, their presence is still felt today. They still have a direct presence, but their departure opened further space for the anti-occupation, pro-independence forces in Iraq to emerge properly and to get stronger and stronger. This created a new dynamic in Iraq, that the United States started losing its full control over the country.

And that loss of full control further strengthened the emergence of the people resisting their presence in the country. This came to a head by 2014 when the ISIS* forces invaded and occupied Mosul with the support of some local forces, including parts of the Kurdistan leadership. The Iraqi Kurdish leadership led by Barzani, particularly that wing of the Kurdish leadership, actually cooperated with ISIS in the fall of Mosul and occupation of about a third of Iraqi territory.

Sputnik: How did the Barzani government of Iraqi Kurdistan cooperate, briefly?

Sami Ramadani: A lot of the leading figures of the fall of Mosul, apart from the ISIS figures (they were always underground and secretive), but their supporters: former army officers, former Saddam regime functionaries, some of the more extreme sectarian Islamists, were all based in Erbil, the capital of the Kurdistan regional government.

Sputnik: And these ISIS elements were permitted to function in Erbil?

Sami Ramadani: They were permitted. They functioned in public, they had TV stations, radio stations, all their literature was published in Erbil. So, there was preparation. Remember in that period, 2013- 14, there was an intense conflict over political power in Iraq. And although the United States backed [former Iraqi President] Nouri al-Maliki to come to power, he gradually parted away from them, instituting particular policies that angered the Americans. And the United States’ most loyal ally in Iraq is Masoud Barzani, leader of the Kurdistan region government, he rebelled as well against Maliki.

Ex US Protege Maliki Faces Criminal Charges in Iraq
So, both the United States and Barzani wanted to bring down Maliki. ISIS [was allowed] by the United States and Barzani to take over Mosul and take over areas which were under the control of the Kurdistan regional government, like the famous town of Sinjar where most of the Yazidis lived. [Sinjar] was under the control of Barzani’s forces and they withdrew 48 hours before ISIS’s forces arrived into Sinjar. And there is footage of the Peshmerga (which are the Barzani forces) and ISIS forces having green lines and greeting each other - with the flag of ISIS one side and Kurdish regional government on the other.

Now [Barzani had two prizes]. One, to bring down Maliki, which eventually they succeeded in doing. But secondly, to take over [the entirety of] the so-called areas that are under dispute. Should [these areas] belong [under] the direct control of the central government or should they belong to the Kurdistan Regional Government? And these were huge swathes of Northern Iraq, stretching from the most important oil producing city of Kirkuk, which was still under central government control, all the way [through] towns, villages, all the way to Mosul.

Sputnik: Former president Maliki, a Shia, was accused of operating a more sectarian government and there was lots of alienation from segments of the Sunni population. Is that correct? Is that one of the reasons why ISIS was greeted with some degree of support?

Sami Ramadani: It’s certainly one of the reasons. Remember that Maliki’s sectarian policies were not new. They characterised all of the governments, regimes, that the United States established in Iraq since 2003. The sectarian structure of Iraqi politics, constitution, army structures, new security forces, were all based on sectarian lines and divisions. So, it's a system that the United States itself instituted. Maliki was no more sectarian, or less, than previous regimes. Because the system itself, the structure of Iraqi state and government, was founded on sectarian [grounds]...

Sputnik: You mean since the 2003 US/UK invasion or before?

Sami Ramadani: Since the invasion. Saddam had sectarian policies, but [they were limited]. For example, [under Saddam] you are banned, every Iraqi is banned, to stand up and say ‘I'm Sunni or Shia’, or [of] this or that sect. It's actually illegal, especially if you're a state functionary, you'll go to jail. Your ID, your documents, none of it would legally refer to your sect. There were secular traditions that Saddam had to adhere to. He became more sectarian once the uprising started.

Now what Saddam faced was two great uprising, both of which started in the south and spread across. When he retaliated, he necessarily retaliated against Shia towns and villages and state functionaries, armed forces, you name it, ruthless suppression. But he was generally an equal opportunities dictator. [Saddam’s] concern was more political power than establishing a sectarian system as such. So, there is a subtle difference.

Sputnik: To what extent do you expect the foreign policy of the Biden administration to differ from that of Trump's, as far as Iraq is concerned?

Sami Ramadani: US policies in Iraq after the occupation, especially after most of their forces left Iraq, were anchored on applying the so-called Biden Plan, meaning dividing Iraq along ethnic, religious lines of Kurd, Sunni, Shia and keeping tensions going between the various communities, and encouraging even violent ethnic cleansing, and so on. [We should judge Biden by] whether he's going to abandon that anchor of US policy in Iraq. If he's going to abandon it, then Iraq and the United States could have more peaceful relations. If not, it means he is going to continue to keep US bases in Iraq, interfere in Iraq, and make Iraq a base to wage a war on Iran.

UK Military Veterans Condemn US Assassination of Soleimani, Plan Protest Against Possible Iran War
This essentially means that because Iraq is so strategic for its oil resources and its position in the region, in terms of its influence in the Arab world or the Middle East in general, the US policy is dictated by a strategic interest in the area. And US alliance with Israel will also be an important factor, in terms of determining Biden’s policies towards Iraq. So, it is a situation which is even above the person who rules in the White House.

Considering his history in Iraq, I am not so optimistic that he will disengage. That means continued tensions and the United States creating problems, divisions, encouraging terrorism, et cetera, in Iraq. So, he either goes the radical way or goes along with a version, a different version, of what the United States has been doing in Iraq for a number of years now and in the process, destroying it, or near to destroying it, as a society and a functioning state.

Sputnik: You wanted to mention something about the Iraqi Popular Mobilisation Units?

Sami Ramadani: One important factor to stress in Iraqi politics today, is the emergence of a big contradiction between the United States’ presence and influence in Iraq and the rise of the Popular Mobilisation Units, (PMUs or PMFs – Popular Mobalisation Forces). This is now a very big military force inside Iraq that led the fight against ISIS and the defeat of ISIS, and the liberation of the land they occupied in Iraq. These forces are definitely anti-US.

They want the United States out of Iraq. The United States now is accusing them of being just Iranian proxies. This is absolutely false. They have alliances with Iran, but they are rooted in Iraq and Iraqi politics, history. We might disagree with them because of our politics in terms of religion or whatever, but they are a genuine Iraqi force. Some of them are in alliance with Iran, but they are Iraqis that fought tooth and nail to defeat ISIS and they want the United States forces to be out of Iraq. And that is a huge contradiction inside the country. And it's playing a role in shaping Iraqi politics vis a vis US presence and control of aspects of Iraqi society.

* Daesh (also known as ISIL/ISIS/IS/Islamic State) a terrorist group banned in Russia and many other countries.

** This article has been edited for clarity and concision