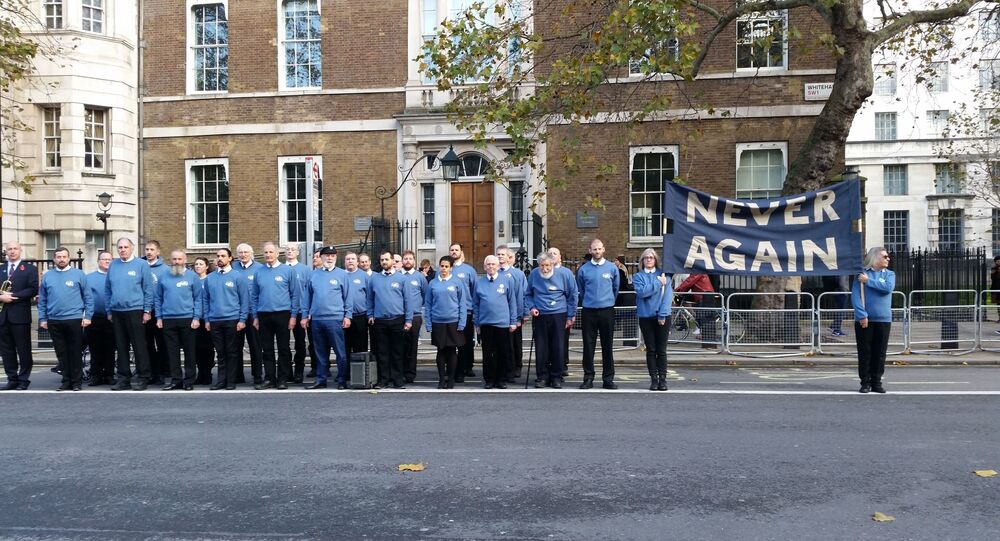 A British veterans group has called on its members to start organising to “demand a de-escalation of violence” and ensure accountability for the US government’s “dangerous actions” in Iraq.

Veterans for Peace UK (VfP UK) has issued a statement condemning the US drone strike which killed Iranian Major General Qassem Soleimani, saying that the risk of war with Iran is “greatly increasing” as a result.

On 3 January the US killed at least six people, including Soleimani, in an airstrike which the UK government has refused to condemn. Domic Raab, the UK’s Foreign Minister, says that he is trying to avoid war with Iran but VFP UK note that Raab described Soleimani as a 'regional menace' while confirming the US's right to 'self defence'. UK Prime Minister Boris Johnson doubled down on Raab's characterisation of Soleimani, saying that he would "not lament" his death.

The veterans of Britain's wars call upon all of their members to “take action” to demand accountability and de-escalation of the violence by writing to their MPs and newspapers and attending local rallies or public events. The statement urges:

"All members and supporters of VFP UK to take action to demand a de-escalation of violence and accountability for the dangerous actions of the U.S.A. government."

"All serving members of the Armed Forces that they have a right to refuse to obey illegal and immoral orders."

VFP UK are planning a demonstration outside of the Prime Minister’s residence at Number 10 Downing Street, on 7 January at 6PM.

On 6 January the French president, German Chancellor, and UK Prime Minister put out a joint statement calling for “de-escalation” of violence. However, the statement places the burden for the current situation on Iran without any reference to US assassinations in Iraq:

“We have condemned the recent attacks on coalitions forces in Iraq and are gravely concerned by the negative role Iran has played in the region, including through the IRGC and the Al-Quds force under the command of General Soleimani.”

The statement also urges Iraqi authorities to “continue providing the Coalition all the necessary support” in the fight against Daesh*.

The statement makes no reference to the fact that on 5 January the Iraqi parliament voted to expel foreign troops from Iraq and called on the government to end its request for assistance from the US in the fight against Daesh.

"The Iraqi government must work to end the presence of any foreign troops on Iraqi soil and prohibit them from using its land, airspace or water for any reason."

Furthermore, Iraqi Prime Minister Adel Abdul-Mahdi told his parliament on Sunday that Soleimani was in Iraq as part of mediation efforts between Iran, Iraq and Saudi Arabia.

Iraqi Prime Minister AbdulMahdi accuses Trump of deceiving him in order to assassinate Suleimani. Trump, according to P.M. lied about wanting a diplomatic solution in order to get Suleimani on a plane to Baghdad in the open, where he was summarily executed. https://t.co/HKjyQqXNqP

As leader of the Islamic Revolutionary Guard Corps (IRGC) Major General Soleimani played a key role in coordinating the battles against Daesh and other Sunni-Islamist militants in Iraq and Syria. Among those killed in the US strike on 3 January was Abu Mahdi al-Muhandis, the deputy leader of the Popular Mobilisation Units (AKA Popular Mobilisation Forces), and the PMU’s press spokesperson Mohammed al-Jaberi. The airstrike which killed Soleimani was preceded by US airstrikes in Iraq and Syria which killed around 25 Iraqi soldiers, who were members of the Kata’ib Hezbollah militia (which are part of the PMU) which has been incorporated into the Iraqi military. The US denied striking a PMU medical convoy, on the evening of Friday 3 January.

'If Europeans Ensure That Iran Benefits From Original Deal, Tehran Can Go Back Into JCPOA' - Analyst