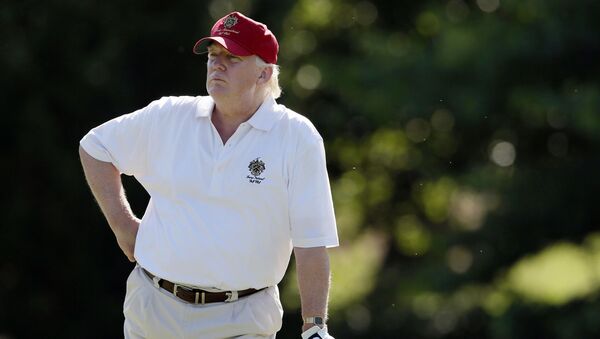 Daria Bedenko
All materialsWrite to the author
US President Donald Trump is known to enjoy weekends at his golf residences, but as the coronavirus pandemic has stricken the United States and the world, driving America to be the nation with the most infections and deaths, the president faces criticism every time he takes a golf club in his hands.

The Washington Post on Tuesday released an "analysis" counting coronavirus-related deaths that "probably" occurred during times when President Donald Trump was playing - or was suspected to be playing - golf. The article has been met with some harsh mockery online.

In the piece, The WaPo sought to tie the COVID-19 death toll to days when Trump was playing golf and, using average numbers, claimed that "about 150 Americans would have died of COVID-19" while the president played.

"If we use this same calculation for all of Trump’s rounds of golf since the first recorded death from the virus in the United States, it’s probable that at least 3,000 Americans have died of COVID-19 while Trump has been playing golf", the article reads, estimating that Trump has engaged in "more than 121 hours" of play since 2 February. "Comparing those durations with the number of confirmed deaths on each day, we get a range of between 3,037, based on the reported number of deaths each day, and 3,862 deaths, based on the seven-day average".

The author then reduced the total number of deaths to 3,163, based only on days in which Trump was confirmed to have been playing.

The piece was roasted on social media, with some particularly denouncing the word "probably" in the headline, insisting that it fuels fake news instead of providing actual analysis.

Lol probably. Who knows tho. Whatever. Just print it.

this headline is hot garbage. when a major news outlet uses "probably" it just fuels the perception of fake news

It's downright tragic to witness former news giants having been reduced to the vacuous purveyors of clickbaity titles.

​Some rolled out their own "analytical headlines" parodying those of The Washington Post.

Analysis: At least 10,000 Americans have probably died of covid-19 while @washingtonpost was writing garbage analysis like this one. pic.twitter.com/1NIOr4pVRz

​"You guys are no longer reporting, you're now politicking", a Twitter user grinned in the comments.

This is not the first instance in which The Washington Post has raised eyebrows over its analyses, as earlier in June netizens ridiculed the outlet's "fact check" seeking to disprove Trump's assertions that the most dangerous and violent cities are run by Democrats, but graphics it offered appeared to only back Trump's point.