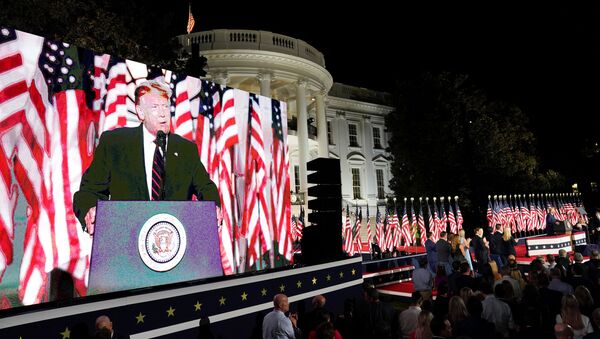 © REUTERS / KEVIN LAMARQUE
Subscribe
Ekaterina Blinova
All materialsWrite to the author
The 2020 Republican National Convention (RNC) ended on Thursday night with Donald Trump delivering his acceptance speech. American observers have discussed the competitive advantages and flaws of the DNC and RNC shows weighing up the GOP's chances of attracting unaffiliated voters.

"The Republican Party, the party of Abraham Lincoln, goes forward united, determined, and ready to welcome millions of Democrats, Independents, and anyone who believes in the greatness of America and the righteous heart of the American people", the US president underscored on Thursday, arguing that his opponent, Democratic nominee Joe Biden "is not the saviour of America’s soul" but "the destroyer of America’s jobs, and if given the chance, he will be the destroyer of American greatness". For his part, Biden tweeted, commenting on the final RNC night: "Tonight is yet another reminder of what's at stake in this election. We have to beat Donald Trump".

Now that the two conventions are over the rivals are heading towards the presidential debate that is due to kick off on 29 September. Meanwhile, one might wonder as to how the DNC and RNC shows have affected the balance of power between the two political heavyweights.

Hits and Misses of DNC and RNC

"The Democrats, as expected in light of the George Floyd protests, spent a great deal of time speaking to the grievances of black voters", elaborates Max Parry, an independent American journalist and geopolitical analyst. "However, it was not only because of the current surrounding political atmosphere but because the two candidates, Biden and Harris, both have political histories which are tainted by issues related to the criminal justice system and race".

To illustrate his point, Parry recalls that "Biden was one of the principal authors of the 1994 crime bill and at one time was supportive of racial segregation, while Harris was a prosecutor and attorney general in California who was a ruthless enforcer of the habitual offender laws against non-violent criminals in that bill". To make matters worse, Biden has made "embarrassing gaffes during the campaign" that have prompted many to think that the Democratic Party "takes the black vote for granted in presidential elections", according to the journalist.

"The Democratic Convention said little about actual policies and was a relentless barrage of empty symbolic rhetoric that is an insufficient substitute for the demands of progressive voters such as the absence of Medicare for all and calls to defund and reform law enforcement", he stresses, suggesting that the Dems should have spent more time focusing on Trump's flaws in the handling of the COVID pandemic.

For its part, the Republican Convention spent "a great deal of time invested in the two party culture wars", while "it would have been wiser to spend time on Trump's strengths which is the perception that he better handles the economy than Biden", according to Parry.

"Trump has implemented protectionist measures that ostensibly serve to bring US productive power and manufacturing jobs back to the United States, while Biden was one of the signatories to NAFTA which outsourced much of that overseas", the journalist emphasises. "It would better serve Trump to focus on these issues that impact voters in the key rust belt swing states he won in 2016 that Hillary Clinton's campaign neglected". 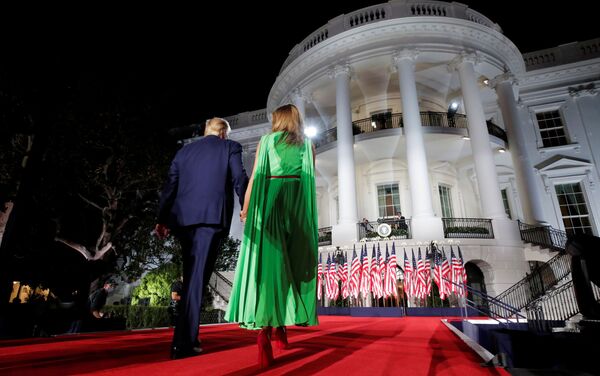 U.S. President Donald Trump walks back into the White House with first lady Melania Trump after delivering his acceptance speech as the 2020 Republican presidential nominee during the final event of the Republican National Convention on the South Lawn of the White House in Washington, U.S., August 27, 2020
© REUTERS / CARLOS BARRIA

While the DNC and RNC tradtionally fight to win the hearts and minds of unaffiliated voters, some observers suggest that Trump's message resonates with Independents more than that of Biden. On Tuesday, pollster Lee Carter, the president of Maslansky & Partners, told "Fox & Friends" that a group of independent voters "were in lockstep with Republicans" during the first night of the Republican National Convention. Citing "voter dials" on Thursday, she pointed out that Independents "want to hear more about law and order" and "the economic recovery", something that Trump is standing up for.

"Whether Republicans can attract undecided and unaffiliated voters remains an unknown", observes Paul Valone, a political commentator and executive director of Rights Watch International. "On one hand, President Donald Trump’s history of successful public policy means that the facts are on the side of the GOP. Unfortunately, it is entirely likely that facts will not drive election results as the Democrats continue to propagandise issues and a biased media ​carries the Democrat message".

The Republican convention has largely employed messages that appeal directly to the party's base of voters rather than trying to persuade those voters who have yet to make a selection or who might be convinced to change their vote, opines Charles F. Jacobs, associate professor of political science at St. Norbert College.

"The campaign to date has centered on messages that had an appeal to Trump voters in 2016 and continue to animate his supporters, rather than making a concerted attempt to appeal to a broader audience", the professor presumes.

Citing national polls, Jacobs notes that "a large segment of the population – somewhere between 1/5th and 1/3rd of those asked – believe the economy is the most important issue facing the nation today". What's more, the same polls show that the public trust the president on the economy more than Democratic nominee Joe Biden, he adds.

"I suspect the campaign will emphasise Trump's successes prior to the impact of the pandemic and criticise Biden's call for higher taxes to support a number of social programmes", the academic predicts. "The issue of tax increases will resonate with the Republican base but also with the general public".

For his part, Jim Jatras, former American diplomat and foreign policy adviser to the Senate GOP leadership, emphasises the months-long unrest in the US, which continued during the Democratic and Republican convention events.

"I think the real thing that was kind of this subtext, especially for Republicans, is the kind of violence and disorders we’re seeing in many American cities like in Portland and especially in Kenosha, Wisconsin", he says. "In some parts of these cities there’s anarchy. People are burning down buildings, being killed. And that’s why you see people saying 'I’m a Democrat, I voted for Hillary Clinton in 2016, but I am voting for Donald Trump now'".

According to him, there is a segment of independent voters who will vote for Trump "not necessarily because of anything they say at the [Republican] Convention, but because of what they’ve seen on the news".

National betting odds for the November vote narrowed between Trump and Biden during the RNC event, Fox News reported on Tuesday citing Real Clear Politics. Having admitted that Biden is still leading Trump in national polls, the media outlet warned against leaping to conclusions, recalling that in 2016 PredictWise showed Democratic presidential hopeful Hillary Clinton with an 88% chance of winning, while Trump had a 13% chance of victory.

At the same time, Politico acknowledged on Monday that "Joe Biden hasn’t gotten much of a polling bounce" following his acceptance speech at the DNC: a POLITICO/Morning Consult poll as well as other surveys shows Biden's substantial lead over Trump but "still roughly where his advantage stood going into the conventions". On Wednesday, CNBC remarked that as coronavirus concerns are going down Trump’s approval rating "has ticked higher" in six battleground states over the last two weeks.

In addition to this, The New York Times reported on Monday, that despite the COVID-related recession and double digit unemployment, polling data and interviews with voters and political analysts indicate that the incumbent continues to get higher marks on economic issues than Barack Obama, George W. Bush, and George H.W. Bush got when they sought a second term.

000000
Popular comments
The polls are "cooked". Biden never has led in any of them. Biden was known as the dumbest Senator long ago. Right in step with Hank Johnson in the house. Just 2 stupid bxxxxrds who should never been elected to anything.
bullwinkle
28 August 2020, 19:15 GMT
000000
"Though Biden Leading in Polls, Strong Economy is POTUS' 2020 Trump Card, Observers Say"_______ There are two economy in US: Wall Street (1%) and Main Street (99%)....! Only Wall Street is benefiting from the colossal amount of printed dollars that has poured into it by Trump ans congress...! The Main Street folks are screwed...! and No, this will not buy voters for Trump cause it is the Main Street Votes that count...1