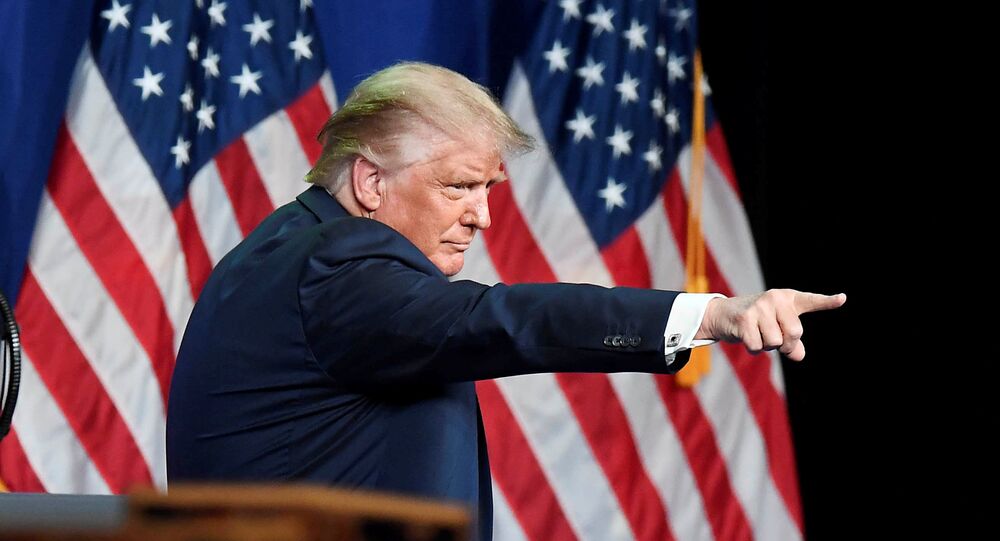 The absence of George W. Bush and Never-Trumpers at the 2020 Republican National Convention does not mean that cracks have appeared within the party, says GOP donor Dan Eberhart, explaining the phenomenon of Donald Trump's "populous conservatism" and his record-high approval ratings among GOP voters.

The US Grand Old Party (GOP) appears to have undergone certain changes under Donald Trump: a Monday Dallas News article titled "Very different party" turned the spotlight on the fact that the 43rd American President George W. Bush was absent from the 2020 Republican National Convention. Furthermore, some lifelong members of the Republican Party, such as John Kasich and Colin Powell, shifted the goalposts by joining Joe Biden's presidential nomination.

In early July, a group of roughly 200 former George W. Bush administration and campaign officials launched a new super PAC called "43 Alumni for Biden" calling upon GOP voters to follow their suit and cast their ballots for the Democratic nominee. Nevertheless, according to the latest survey by Pew Research, an average of 87% of US Republicans approve of Trump's handling of the job. "This 81-percentage-point gap is far larger than the partisan division in average ratings for Obama (67 points) and Bush (58 points) during their presidencies", the nonpartisan American think tank admitted on Monday, expressing bewilderment over the incumbent's "unusually stable and deeply partisan" approval ratings.

"I think the party has changed and that Trump took over the party and wasn't of the party and remade it in its own image" suggests Dan Eberhart, an Arizona-based oil executive and a major GOP donor.

While George W. Bush has been seen as an advocate of "compassionate conservatism" – which did not prevent him from launching two bloody wars overseas – Trump is a different kind of conservative than the Bushes or Condoleezza Rice, or Dick Cheney, according to the GOP donor.

Wouldn’t it be great if President George Bush and Mitt Romney will announce their support for Joe Biden on Thursday, 1 hour before Trump’s acceptance speech? #CountryOverParty #RepublicanNationalConvention

​"Donald Trump is not a neocon, he's not a compassionate conservative, he is a populous conservative, so he appeals to the base, and core voters across America," Eberhart elaborates. "The party elite has found Trump a tougher pill to swallow, so the donor class, the long-time Republican activists and the party insiders have taken in Trump slower and less quickly and just less than numerous on the base."

Nevertheless, Donald Trump has managed to excite traditional GOP voters and donors as well as attract new ones.

One can hardly deny the fact that Trump’s “America First” motto is a far cry from Bush’s “compassionate conservatism”. Once assuming the office, the incumbent president has embarked on a pull-out spree, withdrawing from the multilateral 2015 Joint Comprehensive Plan of Action (JCPOA) and the Paris Climate Accords and slapping painful trade tariffs on both US competitors and partners. In addition to this, he pulled the WHO funding, made an attempt to hold a dialogue with North Korea's leader Kim Jong-un and pressured NATO's allies into paying their "fair share".

"It is willingness to attack Europe and the EU on trade matters as well as China, which shows that we've got a new kind of foreign policy that's focused on America first and America gaining a good return on its investment and not getting in a lot of intending alliances," Eberhart explains. "I think that is something George Washington would like, and I think it's something that a lot of Americans like."

The Trump administration has proven to be "a little bolder, a little more aggressive" than its predecessors who "just lacked the courage to try to tackle these big problems and wanted only to tackle small problems with easy solutions", according to Eberhart. Though Trump is by no means a neocon, unlike Dick Cheney or a lot of people in George W. Bush's administration, "he is assertive in foreign policy and not afraid to defend America's interests", the businessman stresses.

Is There a Real Split Within the GOP?

Touching upon the seeming split within the GOP ranks, the conservative donor shredded the idea that Never-Trumpers constitute a formidable force: quite the contrary, they are "just kind of disaffected people within - it's really a sideshow", according to him.

"Trump's approval rating in the Republican Party is very high and Trump tends to his base, like really no other major professional politician in history at all", Eberhart highlights. "Trump's approval rating in the party and Trump's support from his base has been as strong as in the start of his re-election campaign, not a weakness from him at all."

Meanwhile, it is the Democrats who should really worry about growing divisions within their party, as they are "trying to appeal to the leftist progressive wing on things like Black Lives Matter and other liberal calls and at the same time getting persuadable centrists to the polls", according to the American businessman.

"Last time they were unable to win in states like Michigan, Pennsylvania and Wisconsin. Unfortunately for the Democrats, the turn to the George Floyd incident, things like this really excite the base but pull them further from the centrist, persuadable voters that they ultimately need in November," Eberhart notes, adding that this split was clearly seen at the 2020 Democratic Convention, where Joe Biden appeared to be the odd one out among the progressives.

'The Promise of America's Future'

One is unlikely to see such a split at the 2020 Republican Convention, according to the donor, because, first, "Trump can carry his own water" and, second, "there is much more unity within the Republicans about what Conservative means and there's not necessarily the poll from the hard right that exists on the hard left for the Democrats".

"Trump's Republican Party has brought in a lot of new people, particularly white working class people, who were formerly Democrats or not affiliated with a political party," he observes. "Trump has converted a lot of Republicans, and we have a lot of Republican rising stars like Lindsey Graham, Nikki Haley and Tom Cotton, that really support Trump and are behind Trump."

Nikki Haley, Tim Scott, Rep. Jim Jordan and many others featured during the Monday night of the 2020 Republican National Convention which, according to National Review senior political correspondent Jim Geraghty, "was . . . go figure, pretty good!"

“We were able to restore the promise of our future.” -@FLOTUS
#RNC2020

​In contrast to the DNC event that presented a gloomy outlook of Trump's presidency, the Republicans have focused "on the promise of America's future", as Fox News summed up on Tuesday. Thus, Jim Jordan outlined what promises the US president managed to fulfil despite "the Russia hoax, the Mueller investigation, and the fake impeachment" spearheaded by the opposition. Nikki Haley shed light on the US achievements on the world stage.

“I’m going to ask you, the American people, not to simply look at what the candidates say but to look back at what they’ve done.”—@votetimscott pic.twitter.com/yiUQZernqO

​For his part, Tim Scott, the first African American to be elected to both the United States House and Senate, praised Trump's inclusive approach and condemned Biden and his running mate Kamala Harris for appeasing radical leftists. Instead of embracing “a cultural revolution” the people should “focus on the promise of the American journey", Cotton highlighted.

It is still unclear whether the 2020 RNC will help Trump further narrow the gap with his rival Joe Biden, who still leads with 9.3 points, according to US aggregator FiveThirtyEight's national polling averages.

"I think that Trump continues to perform better than he polls and there will be if not a silent majority, a silent plurality, that will stand with him against the liberal agenda and against Joe Biden's and Kamala Harris's message", Eberhart concludes.