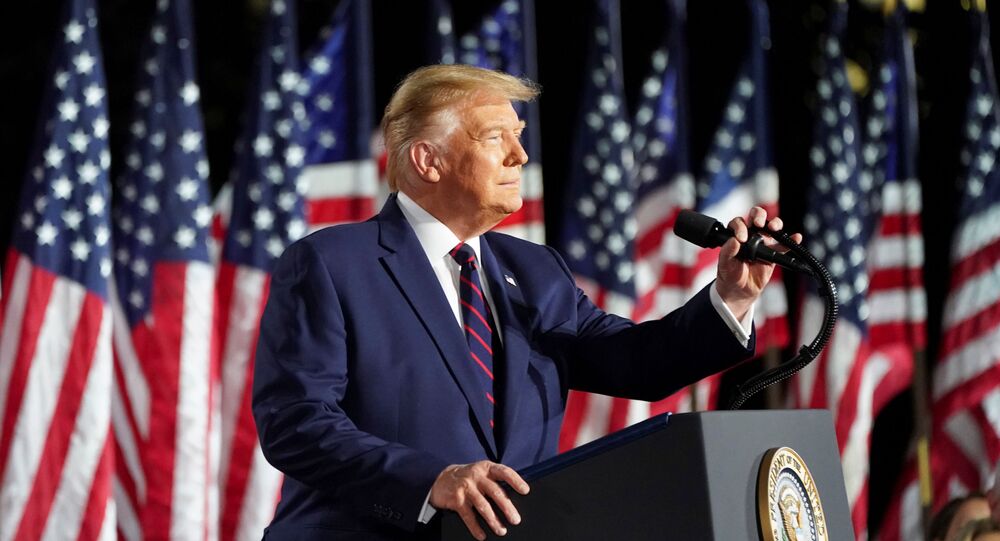 US President Donald Trump delivered the final speech on Thursday, the fourth and final day of the Republican National Convention.

Earlier announced by his party to be the GOP presidential candidate, Trump officially accepted the nomination during his remarks.

"With a heart full of gratitude and boundless optimism, I proudly accept this nomination for president of the United States", he said, addressing the RNC.

Prior to the president's address to the RNC, protesters gathered on Lafayette Square outside of the White House, holding posters in support of the Black Lives Matter movement and calling for people to vote Trump out of office.

Trump began his remarks by voicing support for those impacted by Hurricane Laura after the Category 4 storm made landfall last night in the United States. He thanked his family, from the first lady to his children, then commending his vice president, Mike Pence.

The US president vowed to return America to its pre-COVID levels, promising to rebuild the country and achieve "record prosperity".

"We will lead America into new frontiers of discovery and reach new heights of achievement", he said.

Throughout the speech Trump verbally attacked his rival, Democratic candidate Joe Biden, even calling him a "destroyer of American greatness" at one point.

Commenting on his challenger's record, the president labeled it "a shameful roll call of the most catastrophic betrayals and blunders in our lifetime".

"For 47 years, Joe Biden took the donations of blue collar workers, gave them hugs and even kisses", he said. "And told them he felt their pain – and then he flew back to Washington and voted to ship their jobs to China and many other distant lands... [] Joe Biden spent his entire career outsourcing their dreams and the dreams of American workers, offshoring their jobs, opening their borders, and sending their sons and daughters to fight in endless foreign wars, wars that never ended".

Trump slammed Biden as "weak", and denouncing the Democrats as "failed political class".

"He [Joe Biden] takes his marching orders from liberal hypocrites who drive their cities into the ground while fleeing far from the scene of the wreckage", POTUS asserted. "These same liberals want to eliminate school choice, while they enroll their children in the finest private schools in the land. They want to open our borders while living in walled-off compounds and communities. They want to defund the police, while they have armed guards for themselves".

Addressing his foreign policy, Trump paid particular attention to the Middle East, pointing out his decision to move the American Embassy in Israel to Jerusalem, and touting the recent Israeli-UAE agreement as "the first peace deal in the Middle East in 25 years".

He also touched upon the Joint Comprehensive Plan of Action (JCPOA) - the agreement also known as nuclear deal with Iran that Trump unilaterally exited in May 2018, labeling it "unfair".

While promoting "anti-war" sentiments, Trump went on to tout the US military operations in the Middle East.

"In addition, we obliterated 100 percent of the ISIS Caliphate, and killed its founder and leader Abu Bakr al-Baghdadi", he said. "Then, in a separate operation, we eliminated the world's number one terrorist by far, Qasem Soleimani".

Commenting on a trade deal with China, Trump noted that he "kept his word to the American people".

"We took the toughest, boldest, strongest, and hardest-hitting action against China in American history by far", he said.

The president also highlighted the deals that he exited, particularly listing the Paris climate agreement and the Trans Pacific Partnership, while claiming that he had "secured American energy independence".

Trump on His Agenda

Sticking to his slogan "Promises Made, Promises Kept", Trump asserted that he "did what our political establishment never expected and could never forgive, breaking the cardinal rule of Washington politics, I kept my promise".

He also bragged that he had done "more for the African American community than any president since Abraham Lincoln, our first Republican president".

Trump praised his coronavirus response, claiming that the United States has one of the lowest fatality rates in the world and asserting that death rates have fallen by 80% since April.

"The United States has among the lowest case fatality rates of any major country anywhere in the world", POTUS asserted. "The European Union's case fatality rate is nearly three times higher than ours, but you don't hear that".

Elaborating on his agenda, he also highlighted plans for schools.

"In a second term, I will expand charter schools and provide school choice to every family in America", Trump said. "And we will always treat our teachers with the tremendous respect they deserve".

The president vowed that if elected he would impose tariffs on companies that leave the US and take jobs overseas, outlining his commitment to  bring American businesses "home".

Again highlighting his differences from Joe Biden and the latter's purported intention to raise taxes, Trump vowed to reduce them and create ten million new jobs "in ten months".

His plans even appeared to include space ambitions, as the president promised to send the first female astronaut to the Moon and make the US the first country to place "our beautiful flag" on Mars.