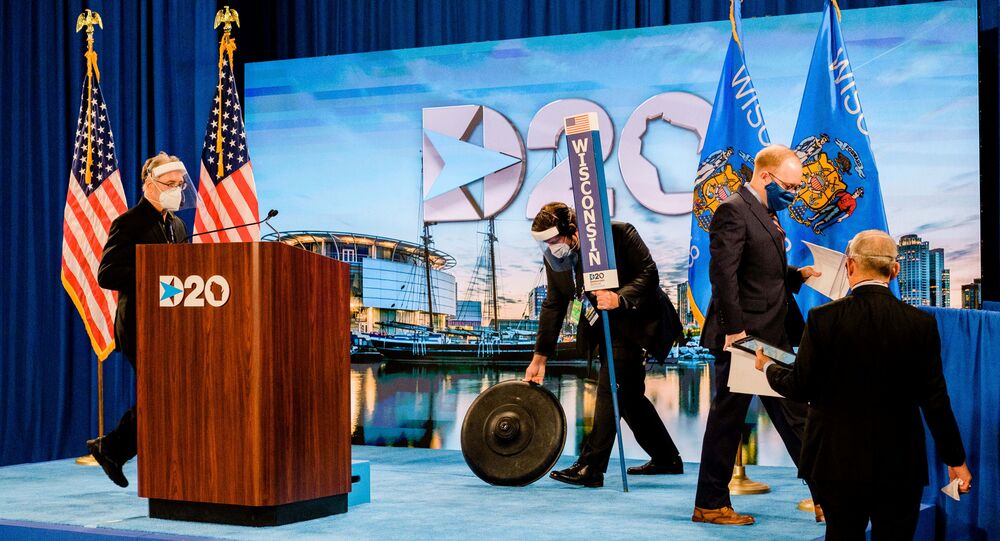 The 2020 DNC event shown online during the COVID-19 pandemic has reiterated the Dems' major message that Donald Trump is not the right fit for the job, with Joe Biden being unanimously praised by both progressives and moderates. American observers have shared their views on whether this message will work.

Trump as the 'Main Villain'

Like in previous days, the leitmotif of Wednesday was Donald Trump's "disastrous" presidency. Thus, Kamala Harris claimed that the incumbent's "failure of leadership has cost lives and livelihoods". Much in the same vein, Obama blamed the president for "170,000 Americans dead" and "millions of jobs gone" amid the pandemic, insisting that Trump did not take his job seriously. For her part, Hillary Clinton warned the nation that if Trump is re-elected, "things will get even worse".

"The election is about Donald Trump and how the majority of the country views his handling of the pandemic and tanking economy in this time of national emergency", presumes Dr Thomas Whalen, associate professor of social sciences at Boston University.

Citing recent polls, the professor remarks that many respondents are inclined to blame the president for the devastating effect the COVID-19 pandemic has had on the nation, echoing the DNC speakers.

"Historically, the situation is similar to President Herbert Hoover's handling of the Great Depression in the 1930s", Whalen believes. "Hoover was soundly defeated for reelection in 1932 as a result. Look for the same to happen to Trump if the election is allowed to fairly play out."

Indeed, a new CNN poll conducted by SSRS demonstrated that 62% of respondents believe that President Trump "could be doing more" to fight the coronavirus pandemic, while 68% admitted that they "feel embarrassed" by the United States’ COVID response.

Though some might think that the COVID pandemic could ruin Trump's chances to win, Newsweek recently noted that the incumbent's national voter support had gone up two points between June and August, narrowing Biden's lead over Trump. For its part, CNN pointed out on 17 August that presently 50% of registered voters favour the Biden-Harris ticket, while 46% support Trump and Pence, a gap which is "right at the poll's margin of error of plus or minus 4 percentage points".

© AP Photo / Mary Altaffer
President Donald Trump waves at the audience as he leaves the stage during a campaign rally, Monday, Feb. 10, 2020, in Manchester, N.H.

Progressives and Moderates Team Up to Back Biden

While Trump was energetically vilified during the three days of the convention, Biden was shown as the only right choice and a potential redeemer of the US.

Robert Spitzer, an American political scientist and author, believes that Joe Biden is "the comfort blanket of the Democratic Party".

"Vice president for eight years, a leader in the Senate for 36 years, he is well known, intelligent, and highly versed on policy. With no other obvious choice in the multi-candidate presidential race, he was the natural result, especially since most in the party favored a more moderate rather than more liberal candidate".

Meanwhile, Dr. Eric Heberlig, a professor of political science and public administration at UNC-Charlotte, thinks that Biden has broad support across the party because Democrats believe he has the best chance of beating President Trump.

"His years of experience, particularly as President Obama's vice president, lead Democrats to know and trust him", the professor notes, adding that progressives, such as Alexandria Ocasio-Cortez, Elizabeth Warren and Bernie Sanders, have thrown their weight behind Joe Biden.

Thus, during the 2020 DNC event both Warren and Sanders, two of Biden's major opponents in the course of the nomination campaign, were united in their praise of the ex-vice president.

"In my view, two factors propelled Joe Biden to the nomination. First, a general desire for 'back to normal'.  This is not to say that a Biden administion will be 'Obama 2.0', but there is a general sense of familiarity with Biden.  This is really not that unusual in American Politics (think about how many times a Bush or Clinton has been a presidential nominee). Second and related, he was probably the most 'mainstream' of all the candidates.  Another candidate who was fairly mainstream (and, hence, the two of them had heated exchanges in the primary) was Harris.  That makes the Biden-Harris ticket relatively 'safe', which might be what's needed to win over people worn out by the unconventional Trump administration", said Paul Poast, an associate professor in the Department of Political Science at the University of Chicago.

Nevertheless, it appears that the 2020 DNC event is unlikely to reinvigorate US voters much, according to Ken Webster, commentator and host of Pursuit of Happiness Radio on 950 in Houston.

"The DNC convention production has been gloomy, slow, boring, and poorly produced", he said while commenting on the Dems' event. "It’s nothing more than a great example of how to not host a virtual convention. The intent of the event is to inspire voters, but I don’t think anyone feels inspired after watching Joe Biden read lines off a teleprompter and mispronounce his running mate’s name."

He expresses hope that the Republicans have paid close attention to "how horribly the Democrat 'virtual' convention has gone thus far".

For her part, Stacy Washington, the co-chair of Black Voices for Trump, opined that the high profile speakers featured over the two last days of the convention were not inspiring: "We’re getting a lot of [speakers] coming out and complaining about the president and not a lot of ideas", she said as quoted by Fox News. “They have problems. They don’t have any solutions. They don’t even bring any coalitions anymore."

While CNN praised the political heavyweights for precise "hits", Fox News' Douglas E. Schoen opined that the 2020 DNC event indicated that the Dems had "employ[ed] the same strategy that was used in 2016 - building an anti-Trump coalition, rather than offering an agenda of change for America".