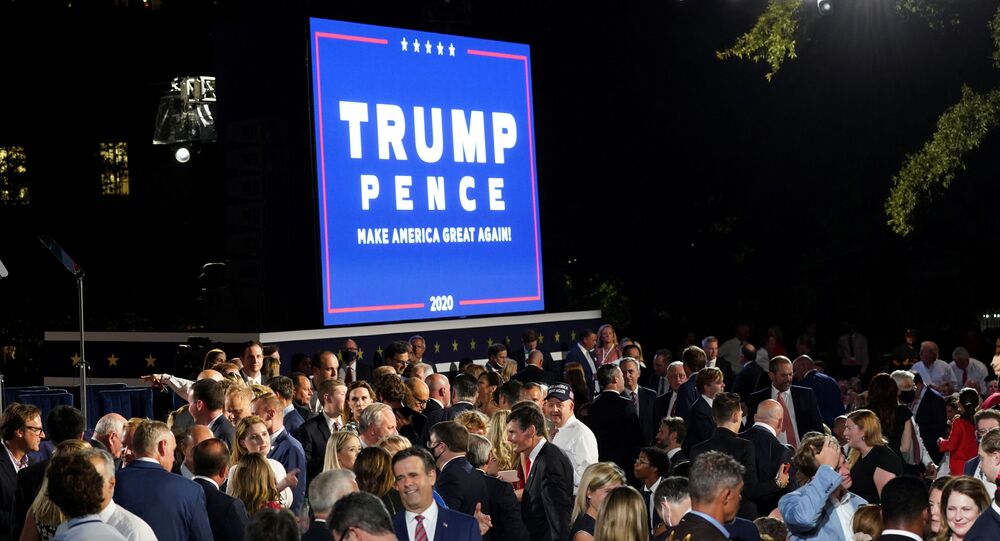 WASHINGTON (Sputnik) - The Republican National Convention (RNC) opened its final night by painting a dark picture of what a Joe Biden presidency would look like, replete with riots in every city and town, ahead of President Donald Trump's nomination speech.

Trump will accept his nomination for re-election on the fourth and final night of the Republican National Convention (RNC) at the south lawn of the White House on Thursday. The RNC kicked off in Charlotte, North Carolina earlier this week, then Vice President Mike Pence gave his remarks Wednesday Night at Fort McHenry in Baltimore in front of a crowd where no social distancing was being enforced.

The fourth and final night of the Republican National Convention (RNC) has kicked off with hundreds of anti-Trump protesters gathering behind the White House.

"The Republican Party goes forward united, determined, and ready to welcome millions of Democrats, independents, and anyone who believes in the Greatness of America and the righteous heart of the American people," Trump will say in his speech according to excerpts obtained by Politico.

In a recorded message, US Senate Majority Leader Mitch McConnell said Democrats want government to control all facets of American life and warned that they want the nation’s capital, Washington, DC, which he referred to as “the swamp” to become the 51st state. He asked voters to ensure the Democrats do not take control of the Senate.

“They want to tax your job out of existence… they want free healthcare for illegal immigrants,” McConnell said.

He also warned that if two more liberal senators win in November, the damage rendered could be irreversible.

"We will continue to support American families as we defeat the coronavirus and return our economy to the envy of the world," the Senate majority leader added.

Ja’Ron Smith, the highest-ranking Black official in the White House said that he has seen Trump’s deep empathy for the families of loved ones killed in senseless violence including the deaths of people like George Floyd and other people of color.

House Minority Leader Kevin McCarthy in a recorded clip warned that the Democrats want to defund police and destroy the economy with socialism. The Trump administration is also prepared to counter the “invisible enemy” called COVID-19, he added.

Former New York City mayor and Trump personal attorney Rudy Giuliani said the riots raging through Democratic-run cities provide a preview of what a Biden presidency would look like. Giuliani claimed Black Lives Matter and Antifa hijacked peaceful protests and turned them into "vicious, brutal riots," that left many police officers beaten and even murdered.

Senator Tom Cotton said Trump's strength will keep America "safe from our enemies and safe from war." He claimed that Biden allowed terrorists to rampage across the Middle East. He also accused Biden of cutting defense spending over his nearly 50 year career and of "aiding and abetting" the rise of China.

Housing Secretary Ben Carson, an African American former presidential candidate, refuted allegations that Trump is racist and noted that before the pandemic Black unemployment hit a historic law. He also said that Trump does not play identity politics but also refuses to submit to political correctness.

Several ordinary Americans also appeared in videos who claimed they were once Democrats but were sick of suffering from socialistic policies.

Many members of the Republican Party have distanced themselves from Trump, including the anti-Trump Republican group called the Lincoln Project and more than 70 former Republican diplomats and national security officials who endorsed Democratic presidential nominee Joe Biden in a letter on 20 August.

In addition, Republican staffers who worked in the George W. Bush administration and for the late Senator John McCain, including Senator Mitt Romney, have rejected Trump and endorsed Biden.

Trump is expected to attack Biden on his so-called radical agenda during his acceptance speech. Trump is also expected to try and tear Biden down on matters related to trade, the US economy, his record on China, immigration and crime.

"We have spent the last four years reversing the damage Joe Biden inflicted over the last 47 years. At the Democrat convention, you barely heard a word about their agenda. But that's not because they don't have one. It's because their agenda is the most extreme set of proposals ever put forward by a major party nominee," Trump said in the prepared remarks.

More than 1,000 people are expected to attend Trump's speech on the White House lawn, according to CBS, which noted that some have been critical at the lack of social distancing amid the pandemic. Guests were lining up in front of the White House more than five hours before the speech, NBC reporter Garrett Haake said.

© REUTERS / CARLOS BARRIA
U.S. Senate Majority Leader Mitch McConnell (R-KY) is seen on a video screen addressing the final night of the 2020 Republican National Convention over a large crowd of Trump supporters expected to number around 1500 people gathered on the South Lawn of the White House to attend U.S. President Donald Trump's acceptance speech as the 2020 Republican presidential nominee in Washington, U.S., August 27, 2020.

Trump is expected to speak at 10:30 p.m. The RNC will also hold a fireworks display near the Washington Monument after Trump's speech. The park service will closed down roads until 2:00 a.m. EST.

Earlier on Thursday, Trump said he was prepared to postpone his scheduled acceptance speech tonight to Monday instead in light of the aftermath of Hurricane Laura, which he also noted was far less destructive than was initially anticipated.

Democratic presidential nominee Kamala Harris gave a rebuttal speech to the RNC earlier on Thursday, where she defended the ongoing racially-charged protests reignited with the officer-involved shooting of Jacob Blake in Kenosha, Wisconsin on Sunday. The Senator also criticized Trump of failing to protect the American people with his "incompetence" towards the novel coronavirus disease (COVID-19) pandemic.

US election day will take place on 3 November, although some Americans will receive mail-in ballots next week. Trump has claimed mail-in ballots will help the Democrats steal "millions" of votes, but has failed to provide any proof to support the notion.

According to an average of the most recent surveys published on poll aggregator realclearpolitics.com (RCP), Biden is ahead in most of the major battleground states including Pennsylvania (+5.8%), Florida (+3.7%), Wisconsin (+3.5%), Michigan (+7%), and Ohio (+2.3%). Trump and Biden are tied in North Carolina but the US president leads by nearly 2% in Iowa.

Nationally the RCP average has Biden ahead by 7%, although the national polls are only a general barometer of the race because of the electoral college format which requires candidates to win states, not overall popular vote.