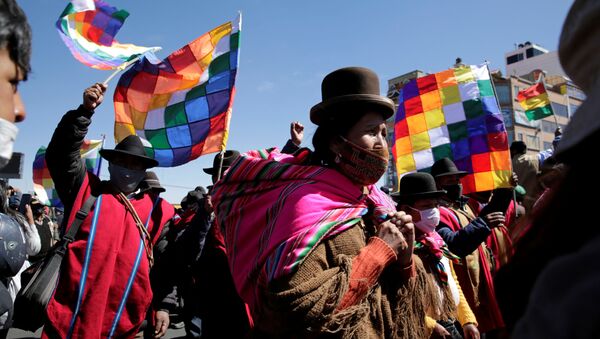 Ekaterina Blinova
All materialsWrite to the author
Bolivians' patience is wearing thin as La Paz is yet to deliver on its vow to hold snap elections in the country after the military forced ex-President Evo Morales to step down and flee the country. Although the government scheduled a new vote for 18 October, MAS supporters remain on alert, says Bolivian journalist Alberto Echazu.

The de facto Bolivian government's decision to postpone the country's general elections in late July for the third time in a row under the pretext of the COVID pandemic prompted nationwide protests spearheaded by Evo Morales' Movement Towards Socialism (MAS) supporters, the Bolivian Workers’ Central (COB), and trade unions.

Starting on 3 August, Bolivians kicked off marches, rallies, and erected road blockades across the country urging La Paz to deliver on its promise and let people cast their ballots for the first time since the November 2019 coup d'etat. According to Nodal.am, within just 24 hours, more than 75 major roads and highways in the provinces of La Paz, Cochabamba, Santa Cruz, Oruro, and Potosi were fully or partially blocked by the protesters. After 10 days of blockades and rallies, the de facto government struck an agreement with MAS on a law that mandates a vote to be held on 18 October and envisages criminal penalties for any effort to change the date.

Protests Suspended, But MAS & Unions are on Alert

"The protests have stopped", says Alberto Echazu, a political analyst and journalist with La Resistencia Bolivia. "The Bolivian Workers' Central (the worker’s union that encompasses all Bolivian workers) and the Pact of Unity (peasants and indigenous worker’s organisations from all of the country) instructed their affiliates to lift the blockades after an agreement was reached between the Legislative Assembly and the Electoral Tribunal to establish the definitive and immovable date for the elections on 18 October".

The MAS & Bolivia's COB leaders call for protests to pause, after achieving guarantees for elections. They have always called for a peaceful route out of this dictatorship.

In La Paz, the movements have radicalised & will mobilise until Añez is out. Their rally now in El Alto👇 pic.twitter.com/lyG6I1o2Kv

​Bearing in mind the de facto government's previous political manoeuvres, Bolivian trade unions and MAS remain "in a state of alert" to prevent any new attempt to suspend it, according to the journalist. He believes that if Jeanine Anez postpones the election once again, it will surely trigger a new uprising "that will be impossible to contain''. Although tensions have scaled down, La Paz's intentions to crack down on trade union leaders is keeping the tension high.

​Previously, Echazu voiced concerns about the apparent attempt by the Anez cabinet to stay in power as long as possible. Taking the reins of the country in November 2019, Jeanine Anez vowed to hold snap elections and ruled out taking part in the upcoming vote, explaining that her only goal was to unite the fragmented electorate. However, in January 2020 Anez abruptly announced that she would run, while the elections have been repeatedly delayed too.

The journalist recollects that La Paz first warned that the peak of the COVID pandemic would be around May, so the date was pushed to August. Then they said the peak would be in August, so they moved it to September, and once more they said the peak would be in September so the date had to be moved to October. It is hardly surprising that the people started to suspect "a strategy to keep postponing the elections in an attempt to remain in power for as long as they can", he points out.

"That dishonest and deceitful use of the pandemic by the regime in order to postpone the elections indefinitely is the reason why the social movement decided to mobilise its affiliates", Echazu explains. 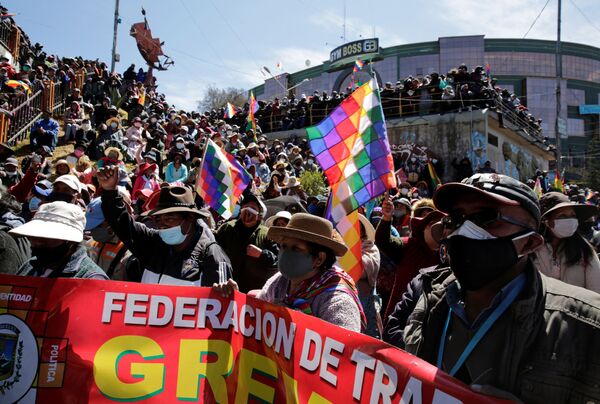 Street vendors attend a rally on a blockade point demanding Bolivia's President Jeanine Anez (not pictured) her resignation, while the Bolivian Union Workers (COB) declare a pause to protests according local media, amid the coronavirus disease (COVID-19), in El Alto, on the outskirts of La Paz, August 14, 2020
© REUTERS / DAVID MERCADO

Is a Military Option on the Table?

During the protests, former Bolivian President Evo Morales, who is currently residing in Argentina, warned demonstrators against clashing with the de facto government's military forces, urging Bolivian protesters to solve the issue by peaceful means. "We must not fall for provocations that want to lead us to violence", he wrote, suggesting that La Paz's decision to send military convoys with oxygen through roads blocked by trade unionists and workers could be a provocation to incite violence and then justify the use of force. One might wonder whether the de facto government would pick a military option if protests resume.

"Using the military to suppress the protests would certainly mean new massacres as in Senkata and Sacaba in November 2019, however, the sanitary crisis has hit the armed forces and there seemed to be a reluctance from the military to go out to suppress the blockades and demonstrations during the eleven days of protests, despite the regime's clear intentions to use the force, shown in various threats by the minister of government and the minister of defence", Echazu elaborates.

According to him, the only way to avoid greater social turmoil is to hold the vote on the established date with no further postponement. "In the case of another attempt to postpone it there will surely be a massive uprising, as the last one was unprecedented, with blockades and demonstrations all over the country", the journalist warns.

However, it appears that the de facto government of Jeanine Anez is well aware of MAS big chances to return to power after the elections. National polls show MAS presidential candidate Luis Arce's stable lead vis-à-vis his competitors.

A poll of Bolivia's 9 largest cities shows MAS candidate Luis Arce with a slight lead. The big cities are where the MAS is weakest, so to win even there is a good sign.

Once the rural indigenous vote is added (Where the MAS get 80%+) a first-round victory looks very likely. pic.twitter.com/xuELaP8Yay

​On 7 August, American newspaper the Miami Herald opined that Bolivia’s 18 October presidential election might result in victory for former President Evo Morales’ MAS party, which was called a "tragedy" by the media outlet.

Commenting on the op-ed, Echazu expresses bewilderment over the apocalyptic tone of the article.

"Leaving ideological postures aside, MAS’s fourteen years of government were economically successful, and provided an unprecedented stability in a country characterised for its political instability and economic struggles", he stresses.

Those who oppose MAS presidential candidate Luis Acre ignore the astounding indicators for economic growth and social development during the MAS administration that were renowned by international organisations and show one of the best economies and models of the last decade, according to Echazu.

At the same time, the journalist doubts that the so-called "November bloc" of Carlos Mesa, Luis Fernando Camacho, Jeanine Anez, and the oligarchical sector they represent will cede power easily and quickly if they lose in October. Having suggested that they "do not have the muscle to win in democratic elections", Echazu nevertheless ruled out that La Paz would launch a second military coup d'etat.

"I do not believe that the Anez government would resort to a second coup or a military takeover, as it would prove that this de facto government was, in fact, a dictatorship", he deems. "They have attempted to institutionalise their government, even though its origin and management show its true colours as a revanchist neoliberal restoration, but a military crackdown or an auto coup would bury the ‘democratic’ narrative they have tried to install".