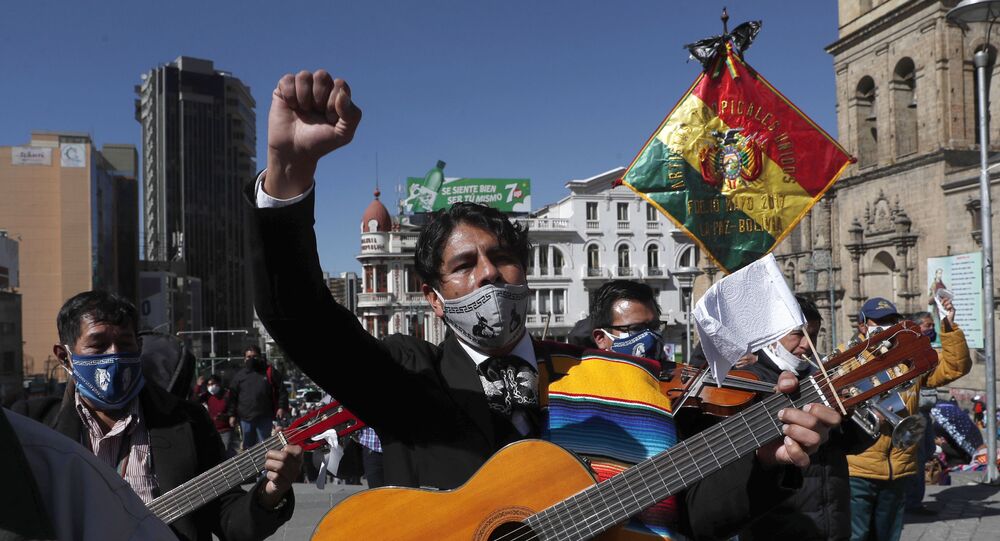 As Bolivia braces for long overdue snap elections, the political fight is intensifying, says Alberto Echazu, a journalist with La Resistencia Bolivia, explaining how the Anez government is trying to disrupt the MAS election bid and putting the country on the neo-liberal track previously avoided and denounced by ex-President Evo Morales.

On 21 June, Bolivia's de facto interim president, Jeanine Anez, signed into law a bill authorising general elections on 6 September, despite previously being reluctant to set the exact date under the pretext of the COVID pandemic. The snap elections, which had been expected to be held on 3 May, were postponed because of the pandemic.

After green-lighting the national vote, Bolivian authorities filed a criminal complaint on 30 June against Movement Towards Socialism's (MAS) frontrunner, Luis Arce, for alleged economic damage to the country during his tenure as the minister of economy and public finance under President Evo Morales. Before the outbreak, polls gave Arce up to 33 percent of voter intentions, while ex-president Carlos Mesa and Anez trailed with 18 percent and 17 percent, respectively.

What Was Behind Anez's 'Change of Heart'?

"Anez had no other option but to promulgate the law for elections on 6 September, because, if she didn’t, the previous law that the Legislative Assembly had sanctioned, putting a 90-day limit, was still in place, and the elections would have had to take place on 2 August. Also, several worker’s organizations and social movements had given Anez an ultimatum to call elections or face popular uprising", explains Alberto Echazu, a political analyst and journalist with La Resistencia Bolivia.

The analyst, who previously sounded the alarm over the Anez government's alleged attempt to stay in power as long as possible under the guise of an anti-COVID fight, recollects that the de facto interim president tried to put pressure on both President of the Senate Eva Copa (MAS), and the president of the Electoral Tribunal, Salvador Romero, to continue postponing the elections. Anez sent a letter to Romero, demanding that the Legislative Assembly show a scientific study demonstrating that the agreed date for the election would not be dangerous for the country. Copa argued that Anez's party, the Democrat Social Movement, had participated in the agreement, and that the date had been chosen based on reports from Anez’s government’s Health Ministry.

"[Copa] also reminded the de facto president that her only responsibility was to call elections and that her attempts to continue putting off the date were the proof of her intentions to remain in power, making her a liar, after she had cried on national television days after the coup that her sole mission was to secure new and fair elections, but seven months later she still has not done that", Echazu notes, adding that Anez and her party fellows also failed to persuade Romero to further delay the long overdue poll.

© AP Photo / ANDRES LARROVERE
Supporters of former Bolivian President Evo Morales, exiled in Argentina, take part in a meeting organized by the Bolivianos Unidos group in Mendoza, to support the presidential candidate of the Movement to Socialism (MAS) party, Luis Arce, in Mendoza, Argentina, on March 07, 2020

The so-called "November block" comprising Mesa, Camacho and Anez, appear to be split ahead of the new vote, still striving "to gain the most out of the coup", according to the journalist.

"Now they are attacking each other", he remarks. "Their favorite candidate is still Carlos Mesa, but it would seem that neither Camacho nor Anez are going to get off the race".

Their internal frictions pale in comparison with their apparent intent to get rid of their major contender, MAS's Luis Arce, Echazu deems.

"The 'November block' appears to have no chance against MAS and Arce, who is currently leading the polls", he says. "This has driven them to retake the lawfare strategy in an attempt to proscribe Arce and MAS altogether".

The de facto government already tried to do this in January 2020, when Bolivian prosecutor Heidi Gila announced a corruption investigation against Arce, accusing him of alleged misappropriation of the Indigenous People and Farmers’ Development Fund (FONDIOC) in 2015. At that time, the hearings, which were denounced by the MAS presidential candidate as an attempt to disrupt his bid, were suspended.

"Now [the de facto authorities] presented an accusation against Luis Arce for a contract with a company to provide software for the pension system when he was a minister of economy, even though the state had already begun the process against the company for breach of the contract", the journalist notes.

In addition, the de facto government has filed an accusation against MAS for the alleged electoral fraud in October 2019, in order to proscribe the party for being the supposed perpetrator, Echazu highlights, adding that the supposed "fraud" was already thrown into question by independent international observers, including researchers from the Massachusetts Institute of Technology (MIT) and the Washington DC-based Center for Economic and Policy Research (CEPR).

"The strategy to ban Arce’s candidacy and proscribe MAS is at its highest point since we reported it in March, and now appears to be the regime’s last resort", Echazu believes.

Echazu suggest that this is only half the story, however, as the Anez government is rushing to put the country on the track of neo-liberalism and make it dependent on the International Monetary Fund (IMF) and other Western lenders.

Not only did La Paz sever ties with the Bolivarian Alliance for the Peoples of Our America – People's Trade Treaty (ALBA-TCP), the Union of South American Nations (UNASUR), Venezuela and Cuba, but they also opened the door to the US Agency for International Development (USAID), American businesses and requested a $327 million loan from the IMF to slow the spread of COVID-19, the first credit to Bolivia in 17 years.

On 16 June, the Planning, Economic Policy and Finance Commission of the Chamber of Deputies of the Bolivian Legislative Assembly rejected the $327 million IMF loan. The country's Ministry of Economy and Public Finance argued, however, that it does not require parliamentary approval and that the resources for the loan are already in Bolivia. According to the ministry, Bolivia has recently requested up to $1.7 billion from international organisations.

"Despite the regime´s intent to whitewash the indebtedness with the coronavirus pandemic, the conditions from the IMF in consonance with the neoliberal program of the government have been denounced by the Legislative Assembly and Luis Arce", Echazu underscores. "Currency devaluation and exchange-rate flexibility are the conditions from the IMF, to be put in place after the lockdown".

Whoever wins the elections in September will have to deal with growing debt, particularly as Bolivia's foreign exchange reserves have dropped, from $13 billion in 2014 to under $4 billion now, according to the Financial Times.

"These facts reveal the dishonesty of Anez's government and the true intent behind the coup and the regime change: the restoration of the neoliberal program", Echazu points out, noting that under Morales, the country achieved sustainable economic growth.

According to the IMF, under Morales, the Bolivian GDP increased an average of 4.8 percent a year from 2004 to 2017, while the percentage of the population living in extreme poverty was reduced from about 36 percent to 17 percent during that time. As the country surpassed the $1,100 national income per person threshold in 2010, the World Bank changed Bolivia's classification from "lower-income" to "lower-middle income".