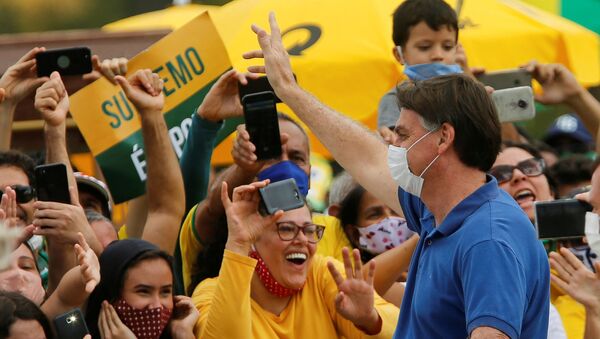 © REUTERS / ADRIANO MACHADO
Subscribe
International
India
Africa
Ekaterina Blinova
All materialsWrite to the author
There is a great underreporting of deaths and COVID cases in Brazil due to a dramatic lack of testing, says Brazilian political analyst Gustavo Guerreiro, shedding light on government resignations and looming impeachment probes against President Jair Bolsonaro amid the coronavirus pandemic in the country.

While Brazilian President Bolsonaro is pushing state governors to reopen businesses, the Latin American country reported a record 1,179 deaths and 17,408 new coronavirus cases in one day on 19 May. The president's controversial handling of the pandemic has prompted the opposition to step up calls for his impeachment. To date, Brazil’s lower house has received at least 30 impeachment requests, according to Bloomberg. In addition, in late April, Supreme Federal Court authorised an investigation of alleged corruption and obstruction of justice by the president. The decision was made after ex-Brazilian Justice Minister Sergio Moro accused Bolsonaro of firing a top police commander to shield his family from investigations, something that the president vehemently denies.

Bolsonaro's calls for reopening are only hindering Brazil's economic recovery, argues Gustavo Guerreiro, executive editor of the journal World Tensions and a member of the Brazilian Centre for Solidarity with Peoples and Fight for Peace (CEBRAPAZ) envisioning that the Latin American country is heading to a political crisis.

Sputnik: Brazil is among the world's least-tested countries when it comes to COVID-19. While the country has reported nearly 15,000 deaths and 220,000 cases so far, Domingos Alves of the Sao Palo University suggests that the number of infections could be at least 16 times higher. What's your take the unfolding situation? Would you agree that the actual numbers of those infected could be much higher?

Gustavo Guerreiro: The Brazilian government does not know the number of cases of infection spread throughout the country, let alone deaths. But this is a global reality, due to the great speed with which the virus has spread and the inability of the public sector to carry out extensive testing on the population.

This occurs both in Brazil, and in European countries, and even with the US, which may have an even greater number than what we see there. The point is that Brazil is one of the countries where the test for COVID-19 is least tested. There is also a great underreporting of deaths from COVID-19. Many people die with symptoms of the disease, but remain as suspected cases, as they have not been and will not be tested. I have no doubt that the reality must be even more serious than the study's estimate.

I do not doubt that Brazil will soon take second place, along with the US, with the highest number of cases and deaths from the disease. Interestingly, the two countries are governed by presidents who have scorned the severity of the disease. Bolsonaro manages to be even worse, because not only does he disregard isolation, but he stimulates agglomerations. This is not an ideological conviction motivated by the so-called herd immunisation, which in itself is absurd, but a sordid rejoicing in a policy of eugenics. 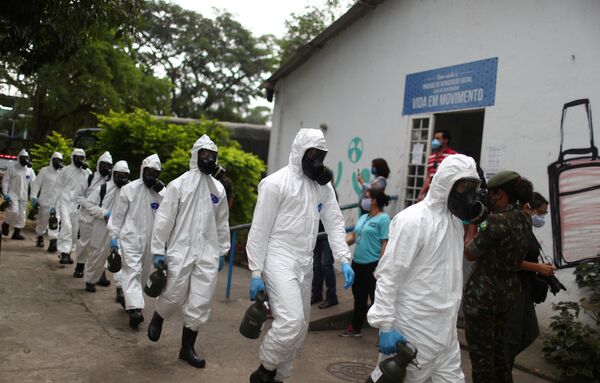 Sputnik: Has the Brazilian government so far developed any plan of how to handle the pandemic? What's your take on Bolsonaro's decision to open-up while the death toll is rising? What's behind this? Is he seeking to "emulate" Donald Trump?

Gustavo Guerreiro: There is no structural plan to deal with the pandemic. In Brazil, there is no figure of the central government, which coordinates integrated actions with the federal entities, as it should be.

The proposal to open up trade and economic activity is absurd. You cannot oppose life to the economy. Bolsonaro insists on blaming the governors and the idea of ​​confinement for the economic recession. The cause of the recession is the pandemic. Mass confinement, however paradoxical it may seem, is also a form of faster economic recovery. The less time a country spends facing the pandemic, the better for a return to productive activities. Stimulating the return to work in the middle of a pandemic means, in addition to the human tragedy, as the health system would not support it, an economic tragedy.

This behavior occurs because the president is committed to the elites' agenda. Much of the business community cares little that the working class is dying. Since labor and social security reform removed workers' rights and much of social protection, and since Labor Justice was reformed after the political coup against Dilma Rousseff, the worker became disposable.

Bolsonaro himself said that the death of a company was much mores serious than the death of an individual. Added to all this is the desire to imitate everything that occurs in the Trump administration, to whom Bolsonaro's government is unilaterally aligned, like a vassal.

Gustavo Guerreiro: Bolsonaro is often concerned about the prominence of the Ministry of Health, which at a moment of such gravity is robbing the president of his central role.

The departure of Health Minister Nelson Teich before completing a month in office is just one of the president's inconsequential acts, which has the support of the military around him. Teich did not resign as "a life choice", as he said, but due to an irrational clash over social isolation and protocols for using hydroxychloroquine. The president had determined that the drug can be used preventively and for mild symptoms. The minister, who is also a doctor, refused to put lives at risk, so he left.

The drug became an obsession for Bolsonaro, who uses it as a political argument to counter the social isolation actions taken by state governors. Bolsonaro ordered the Army Pharmaceutical Chemical Laboratory to produce medicine on a large scale (about 1.25 million pills) with raw material purchased from India. Bolsonaro took the hasty step without discussion with the Ministry of Health itself and with doctors and scientists, but the medication has not been used.

As hydroxychloroquine has its effectiveness questioned all over the world, as well as by the Brazilian Sanitary Surveillance Agency, Bolsonaro does not know what to do with all medication produced by the military, which constitutes an act of administrative impropriety and a crime of fiscal responsibility. To try to protect himself from the results of the deaths resulting from this folly, Bolsonaro issued Provisional Measure 966, which aims to exempt government officials from responsibility for the misuse of public resources and errors in performance during the pandemic. 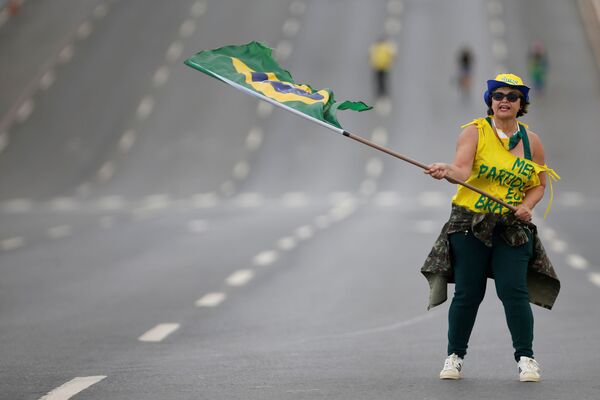 A supporter of the Brazilian President Jair Bolsonaro waves a Brazilian flag during protest against the President of the Chamber of Deputies Rodrigo Maia, Brazilian Supreme Court, quarantine and social distancing measures, amid the coronavirus disease (COVID-19) outbreak, in Brasilia, Brazil May 17, 2020
© REUTERS / Adriano Machado

Sputnik: Earlier Bolsonaro's Justice Minister Sérgio Moro withdrew from the government. Are these resignations a sign of a looming political crisis for the Bolsonaro's cabinet, in your opinion? What's your prognosis on how the political situation will unfold?

Gustavo Guerreiro: Sérgio Moro was the main supporter of his government. As a judge, Moro defrauded the criminal process that culminated in the illegal imprisonment of former President Lula, guaranteeing the election of Bolsonaro, who would lose to the then former president. As Bolsonaro has not joined any political party and is seeing his political support base crumble, he begins to cede positions to corrupt political forces, the so-called “centrão” (center parties). At the same time, he sees investigations against his family moving forward.

Former allies, such as Sérgio Moro himself and businessman Paulo Marinho have begun to expose the insides of the Bolsonaro family's corruption schemes. The National Congress is beginning to move towards an impeachment. In the bubbling political melting pot that Brazil has become, especially in the midst of a health crisis and an unprecedented economic crisis, there is no way to make accurate predictions. Anything can happen. Even a military coup can be considered. Brazil is going through one of its worst moments in republican history and it does not seem that things will improve.