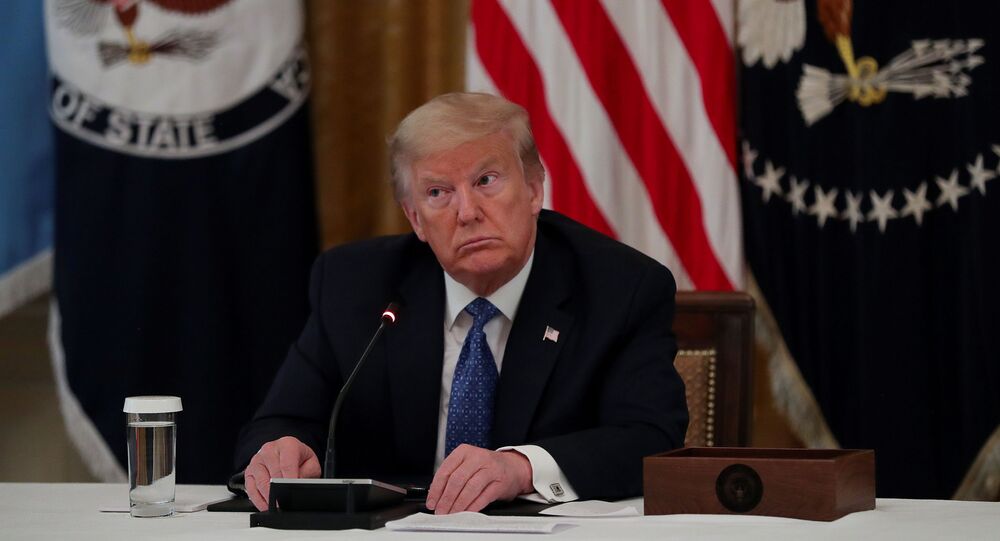 Donald Trump has faced widespread criticism for what was perceived as slow response to the pandemic and delays in efficiently mobilising COVID-19 testing across the country, which was hampered by a lack of availability of crucial equipment and supplies.

President Donald Trump, hosting the first cabinet meeting at the White House since the COVID-19 outbreak in the US, has claimed it was "a badge of honour" that the country has the highest number of confirmed coronavirus cases globally.

"By the way, you know when you say that we lead in cases, that's because we have more testing than anybody else. So when we have a lot of cases, I don't look at that as a bad thing, I look at that as, in a certain respect, as being a good thing because it means our testing is much better," said Trump.

The US President, who was responding to a question from reporters as to whether he was mulling introducing a travel ban on Latin America and Brazil in particular due to soaring COVID-19 cases there, added:

Cabinet members hailed the President’s efforts handling the COVID-19 pandemic, with Vice President Mike Pence, who has led the administration's coronavirus task force, announcing that all 50 US states had partially opened their economies.

The American people "are breathing free air and doing it responsibly”, said Pence, as cited by CNN.

The Democratic National Committee was quick to slam the President’s comments, tweeting that 1.5 million cases of COVID-19 represented "a complete failure of leadership".

WATCH: Trump says he views our 1.5 million confirmed coronavirus cases as a "badge of honor."

We view it as a complete failure of leadership. pic.twitter.com/r9OQTPPXbR

​By 19 May, the US had carried out 12.6 million coronavirus tests, according to the Centers for Disease Control.

According to data provided by the volunteer-led Covid Tracking Project, during the past week, between 300,000 and 400,000 tests have been carried out daily in the US.

Currently, the country has 1.5 million registered coronavirus cases, with the death toll at around 92,000, according to Baltimore, Maryland's Johns Hopkins University.

According to Our World in Data, a scientific publication based at Oxford University and cited by the BBC, the US has conducted more testing for the novel respiratory disease, by volume, than any other country. However, this is not true on a per capita basis.

The US is ranked 16th globally in terms of tests per 1,000 people, according to the charts. This places it ahead of South Korea, but behind Iceland, New Zealand, Russia and Canada.

US coronavirus testing rates have been criticised, as has the Presidential administration’s early handling of the pandemic.

In late April, Trump claimed at a White House Coronavirus Task Force briefing that criticism of the country’s testing capacity for COVID-19 was "partisan," adding that "we're dealing with politics, we're dealing with a thing called November 3, it's called the presidential election".

Trump had, on occasion, blamed governors for insufficient testing, tweeting, "The States have to step up their TESTING!"