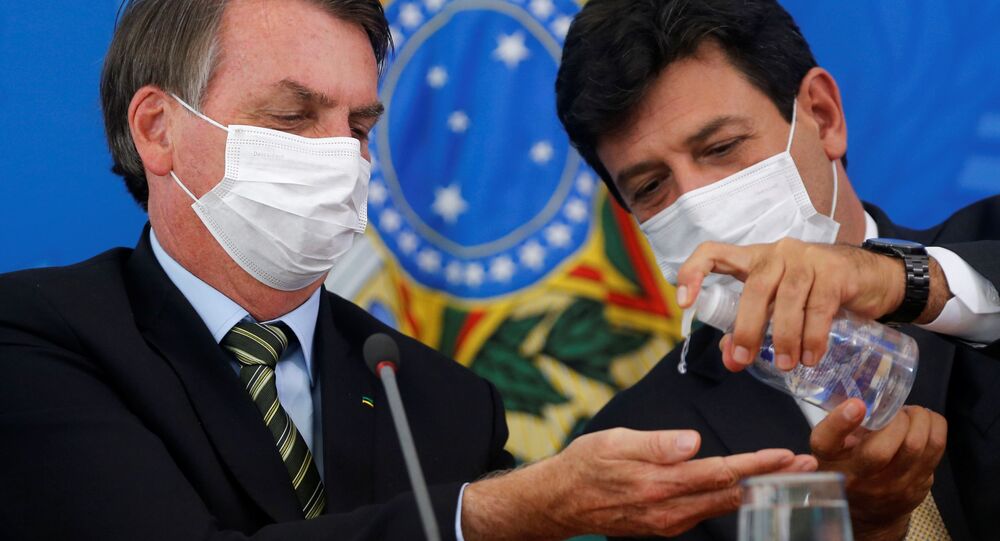 The Covid-19 outbreak will drastically hit Brazil's workers and the poorest sections of the population, predicts Gustavo Guerreiro, executive editor of the journal World Tensions, explaining how the Bolsonaro government's neoliberal policies may deal a further blow to the president's plummeting popularity.

The president's handling of the pandemic has already prompted public discontent: starting from 19 March, São Paulo and Rio de Janeiro saw Brazilians stepping out onto their balconies and banging pots and pans protesting against the president.

The pandemic has added to socio-political tensions simmering in the Latin American state for more than a month over Bolsonaro's row with the country's Supreme Court and National Congress. The trigger for the spat was the use of 30 billion reais ($6.2 billion) from the federal budget.

To break the stalemate, the Brazilian president urged his supporters to take to the streets on 15 March and lash out at the legislative and juridical branches. In response to the nation-wide rally organised by the president's supporters, opposition lawmakers and Brazilian civil society groups subjected Bolsonaro to harsh criticism over holding "anti-democratic" public gatherings amid the Covid-19 outbreak.

"Bolsonaro has always proposed to be the 'anti-system' candidate, relating the 'system' to the political left. And the system, for him, means democratic institutions", says Gustavo Guerreiro, executive editor of the journal World Tensions and a member of the Brazilian Centre for Solidarity with Peoples and Fight for Peace (CEBRAPAZ), adding that "Bolsonaro's government is not just aligned, but completely submissive to the Trump administration".

According to Guerrerio, the decentralisation of political power is of utmost importance for Brazil and its people. To illustrate his point he recalls that it was House leader Rodrigo Maia who warned the Brazilian president against potential military adventurism towards Venezuela in the aftermath of the attempted January 2019 coup in Caracas backed by the US.

"The Supreme Federal Court, some leaders of the National Congress, governors and the Brazilian Bar Association (OAB) also took a stand against statements by their son, federal deputy Eduardo Bolsonaro who, in a threatening tone, spoke in an interview about the possibility of edition of 'a new AI-5' – an institutional act adopted at the time of the military dictatorship, whose first measure was the closure of the National Congress", says Guerrerio.

He expresses concerns that the movements that support Bolsonaro are endorsing both the closing of the National Congress and the Supreme Federal Court as well as the establishment of a new AI-5.

"As the head of the executive branch, when calling for manifestations that have as an agenda the end of the legislative and judiciary branch, especially of the Supreme Federal Court, [the president] injures the decorum of the position and commits a crime of responsibility, according to article 85, II, of Federal Constitution", Guerreiro notes.

Brasilia declared a state of national emergency on 20 March, while some state governors, mainly in São Paulo and Rio de Janeiro, opted to restrict the movement of people earlier.

Bolsonaro's hesitancy to implement tough measures could be partially explained by the fact that the country's economy had demonstrated slow growth rates even ahead of the pandemic: any suspension of business activities threatened to aggravate the situation even further.

Last week the Brazilian government was forced to reduce its 2020 economic growth forecast to zero and propose a 150 billion reais ($29.55 billion) package to support the country's businesses and workers. Credit rating agency Moody's forecast on Monday that the government's financial measures are unlikely to prevent damage to growth and employment.

"The neoliberal policies adopted as a model, with cuts in investments in health and public services, will bring much suffering to the poorest population and to workers, who are the majority of the population", Guerreiro says. "Constitutional Amendment 95 implemented during the Michel Temer government and maintained by the Bolsonaro government froze the Union's budget resources for basic expenses for 20 years. There is no similar case on the entire planet. It is a crime against the most vulnerable population", he adds.

Meanwhile, the president's approval rates continue to plummet, according to the researcher, who predicts that the greatest blow to Bolsonaro's popularity will happen when the neoliberal policies of Minister of Economy Paulo Guedes begin to affect the poorest sections of the population more strongly.

"On March 10, a survey conducted by a company called Quaest Consultoria was released, in which Jair Bolsonaro's negative rating increased from 32% in December 2019 to 35% today", Guerreiro notes. "When asked about the possibility of impeaching the president, 39% declared themselves in favour and another 49% did not support it".

On 23 March, the Datafolha pollster reported that Bolsonaro's approval rating hit the lowest level since he assumed his position last year: just 34% of Brazilians now believe that the president’s job performance is "great" or "good"