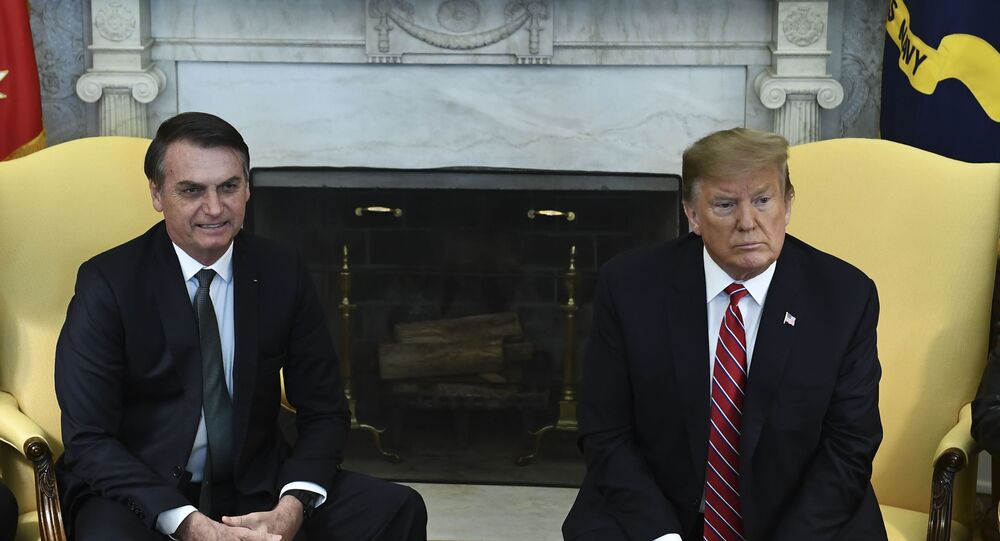 Donald Trump's announcement of the restoration of steel and aluminium tariffs for Brazil and Argentina has once again demonstrated that the White House has no friends but only interests, says Brazilian academic Fabio Sobral, outlining the reasons for Trump's sudden move.

On 2 December, US President Donald Trump signalled that he would restore tariffs on all steel and aluminium for Brazil and Argentina, although it was reported in May 2018 that Trump had permanently lifted the metals tariffs for the countries.

"Brazil and Argentina have been presiding over a massive devaluation of their currencies which is not good for our farmers", Trump tweeted. "Therefore, effective immediately, I will restore the tariffs on all steel & aluminum that is shipped into the US from those countries".

The US has been the top destination for Brazilian steel for more than a decade, with the Brazilian metal accounting for a 19 percent share of US steel imports, according to the US International Trade Administration. At the same time, aluminium has long been among Argentina's primary exports to the US, though accounting for just 2.3 percent of all US imports in the sector.

'There are No "Friendly Countries" for Trump'

According to the Associated Press, the move came as a surprise for both Latin American states, given that Brazil under Jair Bolsonaro and Argentina under Mauricio Macri have been seen as Washington's most loyal South American allies.

While the proposed tariffs may hurt the Latin American economies, the White House is seemingly not concerned about the prospects of alienating Brasilia and Buenos Aires.

"There are no 'friendly countries' for Trump", says Professor Fabio Sobral, who teaches ecological economy at the Federal University of Ceara, Brazil.

"The May 2018 agreement was within a very specific internal political framework of Brazil and Argentina: the support for Michel Temer's government and its reforms (labour and social security) and a Macri government open to US demands. This deal could be abandoned, because it no longer matters after the changes in the Argentine government, with Bolsonaro no longer having much to offer, and given the next American elections in which Trump needs to secure domestic employment", Sobral explains.

Furthermore, a new government of centre-left politician, Alberto Fernandez, who won the 2019 Argentine elections and opposes the US president's policies, "will not be a Trump ally", while Bolsonaro "will submit to whatever is necessary to remain allied" with the Trump administration, the professor opines.

© AP Photo / Natacha Pisarenko
A man holds a 100 peso bill in the cashier of a restaurant in Buenos Aires, Argentina, Wednesday, Aug. 14, 2019. President Mauricio Macri announced economic relief for poor and working-class Argentines that include an increased minimum wage, reduced payroll taxes, a bonus for informal workers and a freeze in gasoline prices. The conservative leader said Wednesday he's acting in recognition of the "anger" Argentines expressed in Sunday's primary election, when Macri trailed his populist rival by 15 percentage points.

Sobral rejects the idea that currency fluctuations in Brazil and Argentina are hurting American farmers, who are actually being struck by Chinese retaliation measures amid Trump's protracted trade war with Beijing.

Commenting on Trump's vocal discontent with the peso and real devaluation, the academic highlights that the Latin American economies' high unemployment rates, indebtedness, and deep recession have prompted them to resort to the measure.

However, according to him, the exchange rate variations in Brazil and Argentina are of different natures.

"Argentina has collapsed in repayment of its international commitments, then a loan has been made to the IMF and this loan is what has ensured that these payments are due", he points out. "There is widespread suspicion about the peso that has been devalued by the international currency market due to the conclusion that the Argentine government is unable to honour its external commitments. It is a classic crisis of mistrust in the currency and not the result of an Argentine government action to devalue".

Sobral foresees that the Trump administration will not make it easier for Argentina's new left-leaning government: according to the academic, Washington is interested "in sabotaging the Alberto Fernandez cabinet with tariffs in order to prevent the economy from recovering".

On the other hand, the devaluation of Brazil's currency is caused by "a huge leakage of dollars, mainly from the stock market, big investors are withdrawing shares of Brazilian companies, leaving the local stock exchanges", he underscores.

"The Central Bank of Brazil has been working to prevent the devaluation of the Brazilian currency by selling dollars from its foreign exchange reserves", the academic says. There is a speculative movement and that large transactions in the currency market have given huge profits to people who are enjoying this mechanism".

He highlights that the country's central bank "is consciously or unconsciously favouring mega international speculators".

According to Sobral, there's a profound change in the US policy under Trump, who is apparently seeking to return to a pre-Theodore Roosevelt "closed" American economy.

"Donald Trump is moving away from the idea of trade globalisation led by the World Trade Organisation. Protectionism becomes the norm in relations between the United States and other countries. He needs to ensure an increasingly closed market for jobs to be kept internally; he doesn't care much about income distribution. He wants to keep jobs and the level of domestic economic activity… Trump's logic is to achieve increasingly favourable trade agreements to maintain growth and ensure re-election", the professor elaborates.

The academic believes that the current situation is largely "a consequence of the 2008 crisis in which the markets of each country is becoming increasingly closed and in greater dispute".

‘Trump Tariffs Can Unite Brazil and Argentina Regardless Of Differences’ – Expert