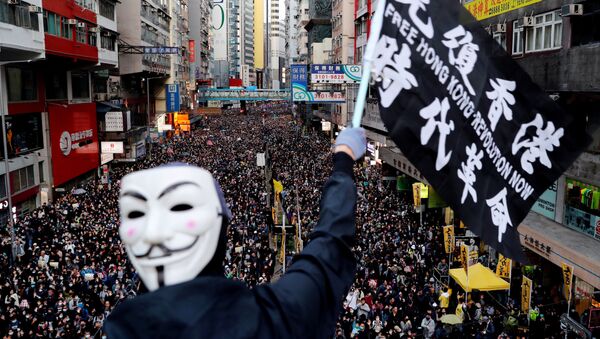 Hundreds of thousands of peaceful demonstrators are said to have taken to the streets over the weekend as anti-government protests in Hong Kong reached their six month anniversary - possibly signaling a shift in influence that’s tied to more than just the arrest of violent protesters.

After several weeks of escalated unrest and even death during anti-government demonstrations in Hong Kong, this past weekend’s mass protests were more reminiscent of the calmer demonstrations that took place six months ago.

Thousands of faces in the crowd. Lights waving above their heads. This is the largest protest since the new police commissioner took office in Hong Kong. #HongKongProtests pic.twitter.com/ikbthm7k8o

Mike Wong, the vice president of the San Francisco chapter of Veterans for Peace, joined Radio Sputnik’s Loud and Clear on Monday to discuss where Hong Kong stands after half a year of anti-government demonstrations within the semi-autonomous city and explain what may have caused this apparent shift in demonstrators’ temperament.

While the size of the weekend’s protests are being disputed, Wong pointed out to hosts Brian Becker and John Kiriakou that they were overwhelmingly peaceful - that is, aside from a few “isolated incidents,” as he called them, such as the petrol bomb attacks at the gates of the High Court and the Court of Final Appeal and the various arrests regarding possession of explosives.

Additionally, the Hong Kong Police Force announced Sunday that it had concluded an operation which resulted in the arrest of eight men and three women for possession of a firearm without a license, possession of dangerous goods, possession of prohibited weapons and unlawful assembly.

“A large amount of weapons, including one firearm and over a hundred bullets were seized. Intelligence suggested that the gang planned to use the weapons during the public procession today and to frame police,” the HKPF statement read.

Wong expressed that he believes the “recent university standoffs” at Hong Kong Polytechnic University and arrests of “thousands of protesters” have left just an “isolated group of hardcore people who are trying to foment violence, but, so far, have not succeeded.”

He went on to say that although there has been heavy speculation over whether the US has been funding unrest in the semi-autonomous city, China has recently taken some steps that would restrict US access - if intervention was occurring, that is.

Last week, China responded to the US' added State Department requirements for Chinese diplomats and recent ban on exporting crowd control equipment to Hong Kong with new rules. In addition to banning US military vessels and aircraft from Hong Kong without prior approval from Beijing, China imposed sanctions on the National Endowment for Democracy, Human Rights Watch and other US-funded NGOs over their alleged interference in Beijing’s internal affairs.

“If cutting off American funding has the effect of reducing payments that reports say have been made to violent protesters - that may also have an effect” on the level of violence during anti-government protests moving forward, Wong asserted.

The Veterans for Peace official explained that in the event that this proves to be true, it might mean “some kind of compromise could eventually be worked out.”