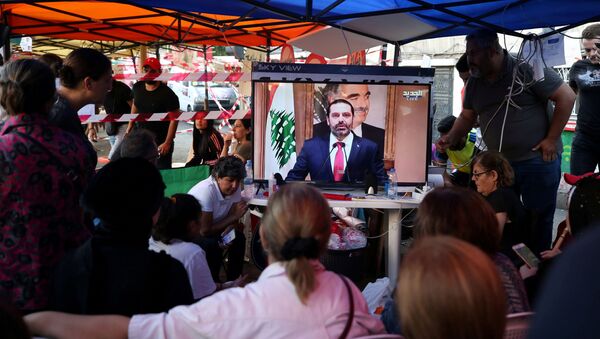 © REUTERS / Ali Hashisho
Subscribe
After nearly two weeks of protests, Lebanon’s government has experienced a number of resignations, including the recent departure of Prime Minister Saad Hariri on Tuesday. But as whispers of a possible economic collapse grow louder, the political elite are attempting to attribute the long-term financial woes to recent demonstrations.

Hariri’s October 29 resignation and claims of hitting a “dead end” after failing to reach a compromise with protesters caught many demonstrators off guard and appeared to be the catalyst for the resumption of operations for a number of workplaces and schools.

Though there are fewer protesters out in the streets than days previous, the dismal reality of the Lebanese economy remains an issue, and experts fear that the government’s inability to take accountability and face the root issue will open the country up to further outside influence.

“The protests over the past few days have decreased in number - from the South to the North - due to a number of reasons. Some of the work offices have reopened, although some of the schools and universities remain closed,” Masri told hosts Brian Becker and John Kiriakou, adding that there’s also a level of exhaustion among demonstrators.

However, she added, “there is a misrepresentation of what is happening” in the country, and political elites have begun to shift blame.

“Primarily Riad Salameh, the head of the national bank, accused the protesters of causing the economic crisis rather than recognizing the protesters are in the streets because of the economic crisis,” the professor pointed out, possibly referencing a Monday interview in which he said Lebanon’s economy could collapse in “days” if protests continue.

Salameh also urged Hariri and other political parties to come together and reach a solution that would “satisfy the people of Lebanon” and “regain trust.”

"We're losing, everyday, confidence... and finance and economics is all about confidence." Riad Salame, governor of the central bank of Lebanon, tells @BeckyCNN that the country is days away from collapse if protests continue. https://t.co/HdVFKGfb6f pic.twitter.com/GqfV1T5iTt

Hariri has since resigned, but did issue a plea calling for supporters of the Future Movement party to “work together with the army and the security forces.”

Though talks concerning a new government have been happening “for the past 10 days,” Masri noted that “Hariri presented his resignation without prior consultation with the president,” which “reveals that [there] is a gap in [the] formation of a government.”

“People in the street were not demanding the resignation of the prime minister, per se. What a lot of us were demanding was the formation of a new government with particular characteristics,” she explained, calling Hariri’s departure more of a “move sideways rather than a move forward.” Or worse - it could be a move backward “depending on the external and internal political players.”

In examining the long-term economic woes of Lebanon, Masri highlighted that a lack of “internal production” has led to a bias towards imports, and “for every $2 we export, we import $16.”

She went on to explain that this has produced an “enormous deficit, and the country’s economic policies have, for decades, been dependant on remittances from the outside,” but those have “dramatically dropped” since 2008 due to the fuel crisis and regional and external issues.

To Riad Salame & Co: Most indicators have been flashing red long before the protests. Don't hide 30 years of corruption and bad policymaking and try to blame 12 days of protests for the looming crisis. #لبنان__ينتفض #يسقط_رياض_سلامة pic.twitter.com/64Tuq9qfxo

Masri expressed that political leaders within the establishment have failed to “give the economic collapse the serious weight that it needs to be given. They’re spending more attention diverting their responsibilities and trying to inflame artificial sectarian elements within the country.”