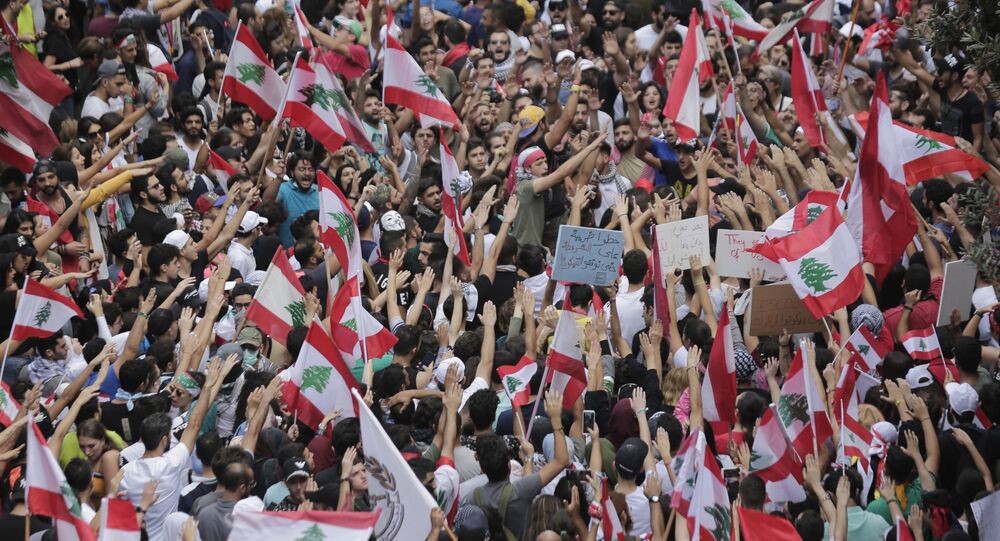 Lebanon's PM Hariri: Agreed Upon Reforms Include Cutting Salaries of MPs, Ministers in Half

Lebanese Prime Minister Saad Hariri stated earlier that he was considering halving ministerial salaries and abolishing some government committees in a bid to save money.

Lebanon's Cabinet, headed by President Michel Aoun at the Baabda Palace, has approved the package of reforms, as well as the 2020 budget, including halving ministers' wages in order to ease the economic crisis in the country, Prime Minister Saad al-Hariri has stated. The only controversial issue in the package was the power sector reform that has been under discussion for several hours. According to the PM, protests across the country restored Lebanon's national identity and broke sectarian barriers.

Cabinet Secretary-General Mahmoud Makkiyeh stated at a briefing that the Ministry of Information is to be abolished as part of measures aimed at tackling the financial crisis.

"The set of measures also envisions the abolition and merger of a number of [other] ministries and departments, including the abolition of the Ministry of Information, and instructions to the relevant authorities to prepare the necessary documents by 30 November 2019, at most", he added.

Under pressure from numerous mass protests against the governing elite, the Lebanese Prime Minister and other ministers drew up a package of steps over the weekend, seen as crucial to restoring confidence, that may mitigate the strains on Lebanon's financial system.

President Calls for Lifting Banking Secrecy From All Ministers Amid Protests

Michel Aoun has urged the government to remove banking secrecy from the accounts of all ministers amid the ongoing mass anti-government protests in the country.

Earlier in the day, the Lebanese President noted that the protests in the streets of the country are expressing "people's pain", but it is unjust to accuse everyone of corruption.

"The situation on the streets is the expression of people's pain, but it is not fair to totally accuse everybody of corruption. Therefore, it is necessary to start with removing banking secrecy from the accounts of all current and future ministers", he said during a cabinet session.

For almost a week, Beirut and other Lebanese cities have been gripped by protests, with the demonstrators demanding that the government resign and action be taken to cope with the worsening economic situation amid a financial blockade and sanctions. The protesters blocked off major highways. In central Beirut, the rallies turned violent as the demonstrators threw Molotov cocktails at police, while the security forces resorted to stun grenades, rubber bullets, and tear gas.

The rallies erupted as the government sought to raise additional funds by introducing a $6 monthly tax on online calls made via WhatsApp and other mobile applications. The tax was abandoned as the protests gained momentum. However, the rallies continued, with dozens of people injured in the clashes between the security forces and protesters.