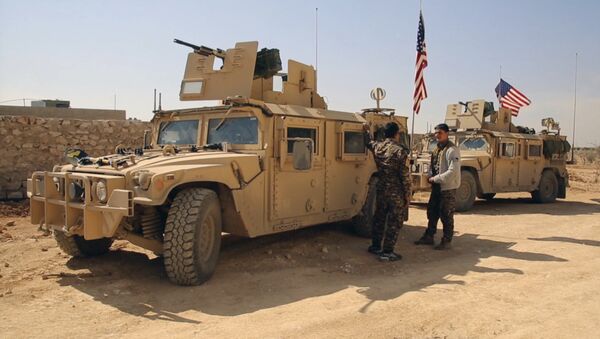 © AP Photo / Arab 24 network
Subscribe
Before the new Turkish operation on Syria's northeastern borders, Trump vowed to Tayyip Erdogan he wouldn’t stand in the Turks way. POTUS shortly thereafter announced the pullout of troops from northeastern Syria, but the following day US command reported artillery fire directed at their local base, which the Turks had reportedly long known about.

Donald Trump has defended his decision to withdraw troops from northeastern Syria, telling conservative activists at a Saturday event that the US has its own borders to guard, apparently implying the one with Mexico, which it should prioritise over everything else:

"Let them have their borders, but I don't think our soldiers should be there for the next 50 years guarding a border between Turkey and Syria when we can't guard our own borders at home", Trump said in a speech to the Value Voters Summit in Washington, an annual conference of religious conservatives, bringing up his chief 2016 campaign promise.

POTUS also approved Saturday night a US plan to send $50 million in stabilisation assistance to Syria. The money is hoped to "protect persecuted ethnic and religious minorities and advance human rights", the Office of the Press Secretary noted in a statement.

"We hope regional and international partners will continue their contributions as well", the document goes on rounding off: "Ensuring the freedom and safety of ethnic and religious minorities remains a top priority for this Administration".

After a phone call between Trump and Turkish President Tayyip Erdogan last Sunday, in which Trump vowed not to stand in Turkey’s way, Trump made an abrupt policy change and ordered US forces out of northeastern Syria, where they had been fighting alongside Kurdish forces against Daesh*. The Kurds have strongly opposed Washington's move, with quite a few rallying against it in front of the White House and arguing the US has let them down exposing the fighters to a Turkish onslaught.

Within days Turkey began an offensive against the Daesh militants remaining on its borders and local Kurdish YPG, which it says has links to the PKK, deemed by Ankara as a terrorist organisation supporting the Kurds back at home.

According to acting and former US officials cited by The Washington Post, the Turkish command who launched artillery rounds near a US Special operations outpost in northeastern Syria on Friday, has been aware for months of an American base there, with the fact hinting that Turkey by conducting a deliberate attack could be trying to push the US contingent farther away from the border.

“We had been there for months, and it is the most clearly defined position in that entire area", one officer asserted as quoted by the US edition.

Army Gen. Mark A. Milley, chairman of the Joint Chiefs of Staff, brought up the matter shortly before the attack, similarly saying at the Pentagon that the Turkish military “is fully aware, down to explicit grid coordinate detail", of the location of US troops in Syria.

The incursion was focused on an area of around 60 miles to the west of the town of Kobane, but the cited officials believe that Turkey was after something more grand, seeking to gain control over a much vaster swathe of Syrian land.

Despite Turkey’s assurances that they were acting in self-defence and hadn’t fired on the Americans, one army officer who spoke about the sensitive issue on condition of anonymity, said that multiple rounds of 155 mm fire were launched from Turkey’s side of the border, noting they had a “bracketing effect” landing on both sides of the US outpost.

“That’s an area weapon", the officer said, noting its explosive effects. “That’s not something we ever would have done to a partner force".

Brett McGurk, a now retired special envoy for both the Obama and Trump administrations in the anti-Daesh* campaign, voiced deep concerns about the incident Friday, tweeting that the United States had given the position to Turkey.

“This was not a mistake",  he said remarking it was by far not an inadvertent attack.

The rounds landed about 9 p.m, within a stone’s throw from the base on Mistenur Hill, US officials said. Navy Capt. Brook DeWalt, a Pentagon spokesman, said in a statement that US troops “came under artillery fire” but were unharmed although there was an explosion.

Per a Turkish statement issued shortly afterwards, they opened fire after Kurdish forces launched rounds at them, but stopped when addressed by the US forces. The US confirmed that the shelling ended after contact had been established.

Turkey launched a new military operation in Syria on Tuesday, two days after President Trump and Turkish President Recep Tayyip Erdogan debated the issue in a phone call that prompted Trump to withdraw American forces from Tal Abyad and Ras al-Ayn in response to Turkey’s incursion between the two border towns. To ground his move, Trump said Monday that he wants to end the “endless wars" in the Middle East.

Turkey’s operation dubbed “Peace Spring”, has been met with a barrage of criticism and scepticism on the part of NATO allies, with a number of countries, including France, Finland and Norway opting to halt their military exports to Ankara. Sweden, meanwhile, has suggested blocking defence exports to Ankara at a European-wide level.