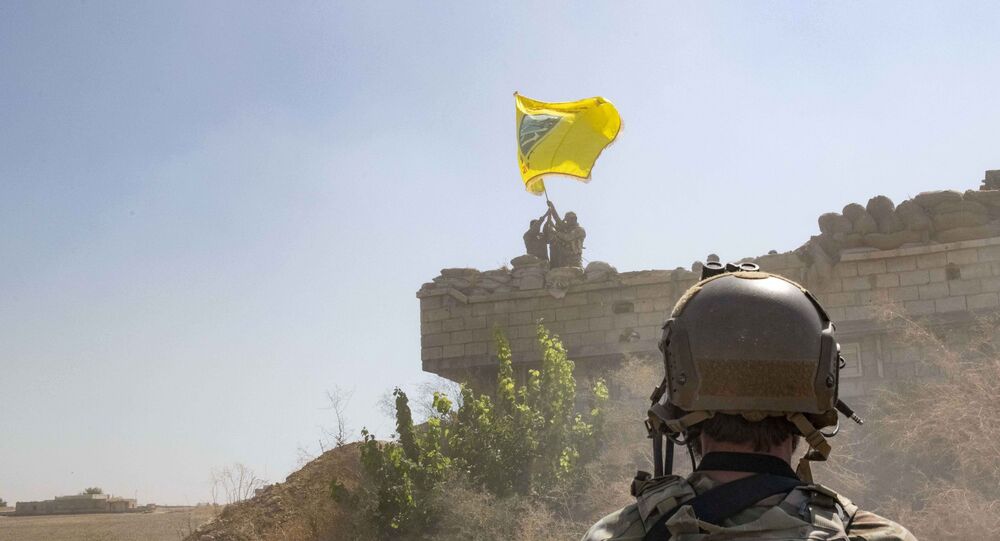 Despite effectively abandoning the Kurdish forces ahead of an imminent Turkish offensive, Trump said he would be closely watching the situation to see if Turkey does anything “off limits”. Ankara said the incursion is meant to eliminate "terrorists" to pave the way for the creation of a buffer zone in northern Syria.

US President Donald Trump has downplayed the American alliance with Kurdish fighters in Syria, saying that there were no Kurds on Omaha Beach on D-Day.

“The Kurds are fighting for their land,” Trump told reporters at the White House on Wednesday. “And as somebody wrote in a very, very powerful article today: They didn't help us in the Second World War, they didn’t help us with Normandy, as an example, they mention names of different battles... but they’re there to help us with their land.”

Trump on the Kurds: "They didn't help us in the Second World War, they didn't help us with Normandy, as an example." He suggests that they battled alongside U.S. forces for "their land," and adds, "With all of that being said, we like the Kurds." pic.twitter.com/4aFGJiQquv

The US President was apparently referring to Kurt Schlichter, an outspoken conservative commentator who praised Trump’s decision to withdraw from the Syrian-Turkish border in an earnest Tuesday column on Townhall.

“The Kurds helped destroy ISIS, true. It’s also true that the Kurds would have fought ISIS anyway, since the psycho caliphate was right next door,” Schlichter wrote. “Let’s be honest — the Kurds didn’t show up for us at Normandy or Inchon or Khe Sanh or Kandahar.”

Until now, Kurdish-led militias have been a key US ally in Syria, where they helped defeat Daesh*, the notorious jihadist group also known as ISIS. Kurdish forces effectively came to control around a quarter of Syria’s territory during the country’s eight-year civil war in areas adjacent to the border with Turkey.

Ankara views these forces as affiliates of the Kurdish Workers Party, a political and militant organisation pushing for greater Kurdish autonomy which has been designated as a terror group in Turkey, and says that a strong Kurdish presence near its borders poses a threat to its security.

The United States and Turkey have agreed to establish a buffer zone along the Turkish-Syrian border that would stretch 30 kilometres deep into Syria.

The proposed 'peace corridor' will be free of heavy weapons and to be patrolled jointly by Turkish and American forces, was also meant to resettle up to 2 million Syria refugees currently living in Turkey. The government in Damascus has objected to the agreement and called it a “blatant attack” on the country’s sovereignty.

The process to establish the so-called safe zone has stalled over differences between Turkey and the US, and Turkish President Erdogan launched a military offensive in the Kurdish-held territory on Wednesday. Trump ordered to pull US forces out of the area ahead of the operation, triggering concerns that this paved the way for Turkish forces to assault the Kurds. The SDF, a major Kurdish-led militia which was instrumental in eliminating Daesh strongholds including Raqqa and Manbij, described the US move as a “stab in the back”.

"As usual, an impulsive Trump has sent shockwaves through the US foreign policy establishment by announcing a major change in the US policy vis a vis Syria. However, his administration is already backpedaling on the so-called withdrawal of US troops. For now, only a few dozen US troops are relocating within Syria in order to allow Turkey to establish a safe zone along Turkey-Syria border. The next few months will be interesting to watch. Perhaps the Kurds will be forced to negotiate a peace settlement with Assad, since they realize that the US cannot protect them forever. On the cautious side, if the war between Turkey and the Kurds escalates, ISIS prisoners now under Kurdish control may escape and plunge the region into more chaos," Chris Kanthan, a San Francisco-based political analyst and author of the book "Deconstructing the Syrian War", says.

Ankara has denied allegations that the operation targets Kurds, and said the goal was to root out "terrorists" along its southern border to create the conditions necessary for the creation of a peace corridor and resettlement of refugees. However, Ankara uses the term to refer to the SDF/YPG military forces of the de facto government of the region, the Autonomous Administration of North and East Syria (NES), often referred to as Rojava.

On Wednesday, Trump said in a statement that he did not endorse the Turkish offensive and thought it was a “bad idea.” He said the US wants Turkey to comply with its commitments to protect civilians and prevent a humanitarian crisis, but did not indicate what the US response would be. Earlier this week, he threatened to “obliterate” Turkey’s economy if the country goes “off limits”.

*A terrorist organisation banned by the UN, Russia, US, and numerous other states.