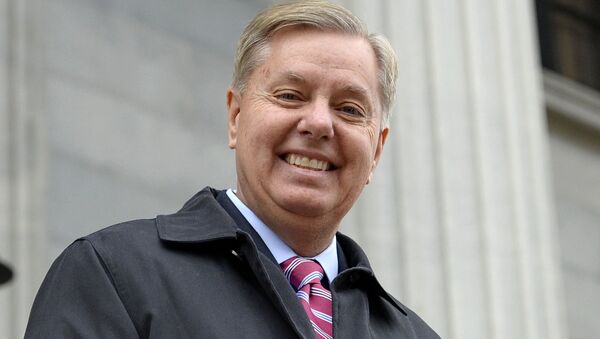 Legendary Russian political pranksters Alexey Stolyarov and Vladimir Kuznetsov cold-called US Sen. Lindsey Graham, a close ally of US President Donald Trump, posing as the Turkish defense minister. Graham frankly divulged the administration’s view that US Kurdish allies are a “threat” to Turkey and that Washington sympathizes with Ankara’s concern.

With the Turkish military bombarding Kurdish People’s Protection Unit (YPG) positions in northern Syria amid a US drawback, the Trump administration is coming under almost as heavy fire for abandoning their ostensible allies. However, while Trump began to let the mask slip on Wednesday in justifying the withdrawal by listing off US conflicts Kurds didn’t fight in, Graham had already pulled the whole facade off the administration in early August, when Russian pranksters got him to admit how he and Trump felt about the Kurds, believing he was speaking to the Turkish defense minister.

“Your YPG Kurdish problem is a big problem,” the South Carolina senator believed he was telling Turkish Defense Minister Hulusi Akar in the early August phone call, a copy of which was obtained by Politico and published Thursday. In reality, Graham was speaking with Stolyarov and Kuznetsov, who’ve pranked every politico from US Rep. Adam Schiff to Washington Examiner journalist Tom Rogan and US Special Representative for Venezuela Elliott Abrams.

The Kurdish people, between 35 and 45 million strong and spread out across four countries in the Middle East, enjoy a level of autonomy maintained primarily at the tip of a rifle. Turkey has considered their militias and political parties to be terrorist organizations for decades, and their relationships with governments in Syria, Iraq and Iran have been only slightly less hostile, although Iraqi Kurds do enjoy a higher level of legally recognized regional government.

Turkish President Recep Tayyip Erdogan considers Kurdish organizations in Turkey and Syria to be of the same ilk, accusing the YPG of being in league with the Kurdish Workers Party (PKK), a communist party and Kurdish militia fighting against Ankara since the 1980s. He claims the invasion of eastern Syria that began earlier this week aims to prevent cross-border attacks on Turkish forces, although there’s little evidence that such incursions take place.

The US invaded eastern Syria in 2014, ostensibly in the interests of helping Kurdish militias defeat Daesh, which happened this past Spring. However, while the US occupation of the oil-rich territory kept Turkey from attacking the Kurds, it did so by depriving Damascus of sovereignty within its own borders that it’s entitled to by international law. The Americans never received permission to enter the country.

That wasn’t the end of the pranksters’ antics, though: a few days later, they got Graham back on the phone again by keeping up the Akar charade.

“We want a better relationship with Turkey. That’s exactly what he wants,” Graham told the duo about Trump in the second call. He also urged the Anatolian country to rethink its purchase of Russian-made S-400 air defense systems, which had drawn Washington’s ire and gotten Turkey kicked out of the F-35 program.

“And this case involving the Turkish bank, he’s very sensitive to that,” Graham said, referring to a US case involving Reza Zarrab, an Iranian-Turkish gold trader and client of Trump lawyer Rudy Giuliani, that has become one of many sensitive points between Ankara and Washington. “The president wants to be helpful, within the limits of his power.”

Graham’s spokesperson, Kevin Bishop, confirmed the call’s authenticity to Politico. “We have been successful in stopping many efforts to prank Senator Graham and the office, but this one slipped through the cracks,” he said. “They got him.”

“It’s no secret Senator Graham has often traveled to Turkey and continued to speak with many members of Turkish government, including President Erdogan, about the relationship between our two countries,” Bishop continued. "He has been clear he wants a stronger relationship and often talked about the importance of maintaining peace in northern Syria to prevent the reemergence of ISIS [Daesh].”

"With Turkey’s invasion into northern Syria, the drive for better relations between our two countries has suffered a body blow. Turkey should immediately withdraw their military forces, and America should reinstitute the safe zone concept to keep the peace in the region. Until this is done, Senator Graham will continue to push for severe, biting sanctions against Turkey," he said.

We have to wonder if now Graham will add to his 2015 laundry list of ways to destroy a cell phone?