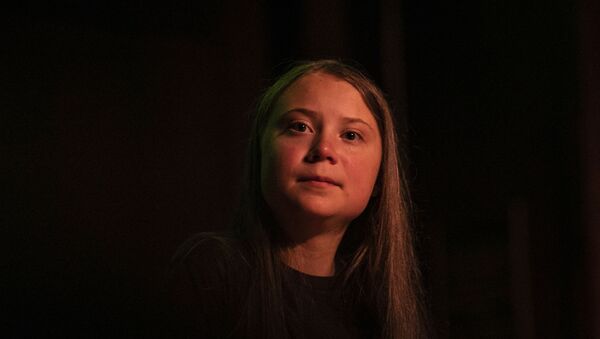 © AP Photo / Jeenah Moon
Subscribe
International
India
Africa
The Swedish teenager has not only sparked heated discussion with her recent passionate and angry speech at the UN headquarters, but has also evoked memories of another young activist, Severn Cullis-Suzuki, who shamed world leaders about climate policies almost 30 years ago. Some of the then-12-year-old’s slogans from 1992 sound all too familiar.

A 1992 address by Canadian youth Severn Cullis-Suzuki, also known as “The Girl Who Silenced the World for 5 Minutes”, at the UN Earth Summit in Rio de Janeiro has prompted a new wave of criticism against her modern-day iteration, Greta Thunberg.

Severn Cullis-Suzuki's speech to the UN in 1992 on climate change sounds an awful lot like Greta Thunberg's in 2019.

I cut the two together to show just how similar the language is: pic.twitter.com/18ptTzX4M4

​While some accused the 16-year-old Swede and her advocates of plagiarism, others lambasted the methods of environmentalists and left-wing activists.

Severn Cullis-Suzuki's speech to the UN in 1992 on climate change sounds an awful lot like Greta Thunberg's in 2019.

Severn Cullis-Suzuki's speech to the UN in 1992 on climate change vs Greta Thunberg's in 2019.

Maybe the globalists should focus on the #CCP’s 🇨🇳#Bitcoin network and wasteful energy it consumes.

1992 Climate Crisis Speech to the UN. This is the same school play that Greta's handlers used. #TrumanShow #SyntheticReality

Using children as powerful emotional manipulation tools isn’t new. It’s been a tactic used by the left for a long time. Greta Thunberg isn’t new. Meet Severn Cullis-Suzuki, she was Greta 27 years ago giving the same fear driven speech to the UN. We lived. pic.twitter.com/Z3b7Kr6k03

​There were those who pointed out that the similarities between Severn Cullis-Suzuki and the new star of the fight against climate change prove that their “alarmist” warnings have no basis to them.

Does anybody remember the "Greta" of 1992?
Very similar message to the one delivered yesterday.
And for the most part Severn has been forgotten.
And she's now an adult and has children of her own and they live quite well.
And... nothing happened. https://t.co/bSMB9Cbmcm

​At the same time, Greta Thunberg’s sympathisers used “1992 Greta’s” speech to slam the world community for its inaction.

25 yrs before Greta Thunberg took to the stage at the UN, 12-year-old Severn Cullis-Suzuki spoke at Rio Earth Summit. We could have spared some of the 60% of animals that have disappeared since the 1970s & pulled a million more species back from the brink https://t.co/4sNyj0gZuc

27 years ago there was a 12 years old girl named Severn Cullis-Suzuki, who fighted for our planet and talked to the world‘s leaders on a UN environmental conference. Just like @GretaThunberg does these days.

Yet it seems nothing has changed:
Standing ovations - no actions!

​Some were stunned that while the world did not listen to Severn Cullis-Suzuki, it is paying so much attention to Greta, arguing that the young activist in 1992 even sounded better.

No they aren't similar.. and Severn Cullis-Suzuki is delivering way better then Greta Thunberg.#GretaThunberg

​There were those who preferred to tear into the older activist.

The first Greta talks about poverty in the streets of Brazil

​The clip, circulating online, shows that the tone of the two speeches, which have 27 years separating them, and their key message are similar. While the Canadian teenager began her address by saying “We’ve come...to tell you adults that you must change your ways”, the Swedish “Joan of Arc of climate change”, as New York Magazine described her, warned grown-up politicians that “we will not let you get away with this”.

Cullis-Suzuki warned that “losing my future is not like losing an election or a few points on the stock market”, and Thunberg accused adults that the only thing “they can talk about is the money and fairytales of eternal economic growth”.

But one cannot say Greta’s speech repeats her precursor’s address completely. For instance, Cullis-Suzuki shares her fear about the depletion of the ozone layer, something which has been addressed by a landmark chemicals ban since then.

“I am afraid to go out in the sun now because of the hole in our ozone. I am afraid to breathe the air because I don’t know what chemicals are in it”, the then-12-yar-old claimed in 1992.

What the future holds in store for Greta Thunberg is yet to be discovered, but as for Cullis-Suzuki, she has built an international career. Among other things, she founded an environmental think tank and worked for UN Secretary General Kofi Annan’s Special Advisory Panel ten years after her sensational speech.