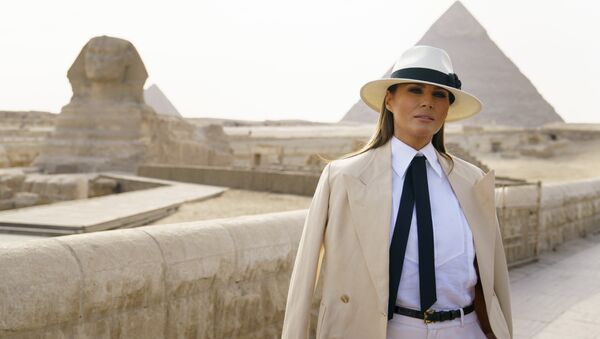 © AP Photo / Carolyn Kaster
Subscribe
Polina Strelnikova
All materials
The current US first lady once described herself as one of the “most bullied people in the world”. However, a new book entitled “Melania & Michelle: First Ladies in a New Era” has prompted a New York Post columnist to conclude that the media attacks Mrs Trump has had to deal with are “more vicious, personal and unrelenting” than what her predecessor faced.

New York Post columnist Miranda Devine has lashed out at a new book called “Melania & Michelle: First Ladies in a New Era” by Tammy R. Vigil comparing the former first lady and her successor, saying it praises one and “thinly veils criticism” of the other.

“Pitting two women against each other just never gets old, does it?” the journalist notes.

Even though its afterword states that “pitting the two women against one another is a troublesome (though common) practice”, Devine notes that the book itself claims that professional life prepared Melania Trump “to serve more as a visual adornment”. As she emphasises, the Boston academic, who wrote the book, explained FLOTUS’s “difficulties” with the fact that she “followed a popular and competent first lady”.

Contemplating the criticism against Melania Trump, the columnist concludes that attacks on her “are more vicious, personal and unrelenting than any first lady has endured” and notes that she is right to describe herself as one of the “most bullied people in the world” even though this statement earlier prompted a backlash against her.

“Clearly, since the president has proven impervious to abuse, his enemies want to get at him through his wife”, Devine noted, noting that one cannot say that Melania Trump has “behaved with anything but dignity in her role, despite ugly provocations, which include attacks on her young son, Barron”.

The journalist also insists that the comparisons with Hillary Clinton and Michelle Obama are in Melania Trump’s favour, saying that she “has not committed the same errors of arrogant overreach” and stuck to her humble role perfectly. Devine also debated the notion that Melania might be an “airhead former model”, pointing out that she speaks six languages, had “street smarts” to escape her “impoverished Eastern-bloc country” and re-invent herself in the US. Besides this, her handling of summits and meeting with other world leaders and their wives also speaks in Melania’s favour, as Devine points out.

“She is a woman whose poise and dignity speaks volumes. When people say, ‘Poor Melania’, she says, ‘Don’t feel sorry for me. I can handle everything’”, Devine concludes her speech.

Over less than 3 years as the US first lady, Melania Trump has been mocked or criticised on numerous occasions for various reasons starting from her clothing choice to her anti-bullying campaign, Be Best. Last year, US media ripped into her outfit choices and in an even more scathing attack on FLOTUS, CNN contributor Kate Brower wrote that Melania "doesn't understand what it means to be first lady".

In October, FLOTUS donned a white pith helmet while sitting in a safari vehicle during her trip to Africa and was ridiculed for her perceived reflection of European explorers and conquerors. In the summer of 2018, media and social networks exploded in outrage after she wore a designer khaki jacket with a print on the back reading: "I really don't care, do u?" as she departed to visit a migrant child centre in Texas.

Eventually, the infamous jacket featured in a music video by Atlanta-born rapper T.I. which had a Melania look-alike stripping in the White House and prompted criticism from the first lady’s representative.