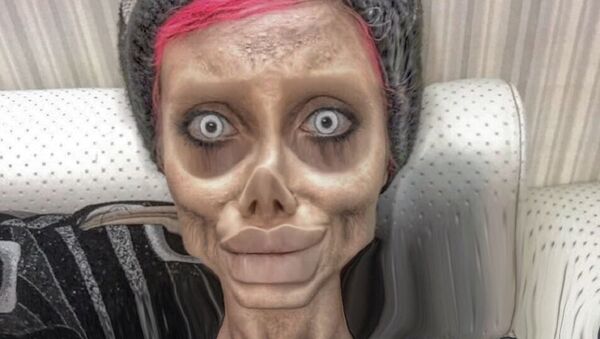 Since Iranian Sahar Tabar shot to international fame for her resemblance to both the Hollywood sex symbol and the product of Tim Burton’s twisted mind, Corpse Bride, she has never ceased to wow netizens with her love of plastic surgery and Photoshop.

She posted a video featuring herself, creepy and resembling a mummy as usual, but this time holding a “baby” and a bottle for feeding. She is seen singing a strange lullaby, which sounded like “lah…lah…lah,” to a small skeleton doll, wrapped into a cloth, and kissing it before shrieking and gazing into a camera.

The new clip did not apparently catch the fancy of commenters as many seemed to be freaked out by this mother-and-baby scene.

“Omfg just stop with the videos they ain’t cute there [sic] disturbing and you look gross”, one user posted, while another puzzled viewer asked, “What the hell is she doing?”

Many were left speechless in some way, posting only confused emojis.

“God jesus…what f**k is that???” another netizen asked.

The Iranian, born in 1998, is not new to such a reaction. She’s gained nearly 500K followers since she shot to international fame due to her unusual feed. Although initial reports by local outlets suggested that she had “had 50 plastic surgeries to look like Angelina Jolie", she has repeatedly denied her wish to mimic the famous actress and having had dozens of operations.

She admitted in an earlier interview with Sputnik that she has had rhinoplasty, botox for her lips and liposuction, which cost is 10 million Iranian rials ($283) per surgery in Tehran, but insisted that it is Photoshop and makeup. She also denied that she had lost a great deal of weight, saying she weighs 54 kg.