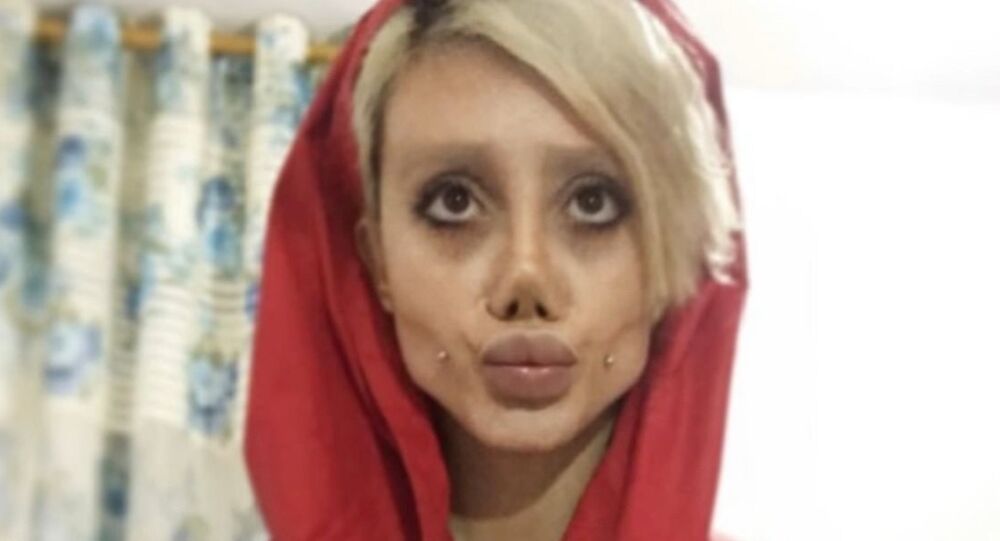 As plastic surgeries are gaining popularity around the world more people are now able to make certain changes to their appearance to look different. Sahar Tabar from Iran recently caused a social media firestorm by posting her photos after multiple plastic surgeries. RIA correspondent Anush Dolukhanyan met with Tabar for an interview.

Photos of a 17-year-old Iranian, Sahar Tabar set local media abuzz with speculation.  The girl "who had 50 plastic surgeries to look like Angelina Jolie," the local newspapers wrote.

However, some social media users said that Tabar actually resembles not the Hollywood star but a character from the cartoon "Corpse Bride."

No. It is Photoshop and makeup. Every time I publish a photo I make my face more fun. It is my way of self expression, a kind of art. My followers know that this is not my real face.

Media reported that you wanted to look like Angelina Jolie, did you?

Which surgeries have you done?

Rhinoplasty, Botox for lips and liposuction operations. I don’t see anything bad in this. It's simple and many people around the world do it. Here in Tehran the cost of one operation is 10 million Iranian rials ($283).

You tried to lose weight to become 49 kilograms. Is that true?

How did your family react to these transformations?

Of course, they resisted as best they could at first. For them it [plastic surgeries] is not a normal thing. But now my family totally supports me and that is the most important thing.

How do people react when they see you on the streets?

People react normally when I appear in the city. They recognize me, call out my name, talk to me and hug me. They support me and I don’t feel any negativity from them.

Over the past few weeks there have been many negative comments about you on the internet, does that upset you?

For me the most important thing is to have the acceptance of my family and God. I have those and that is enough for me. Opinions from  the rest of the world are not important, I ignore their negativity.