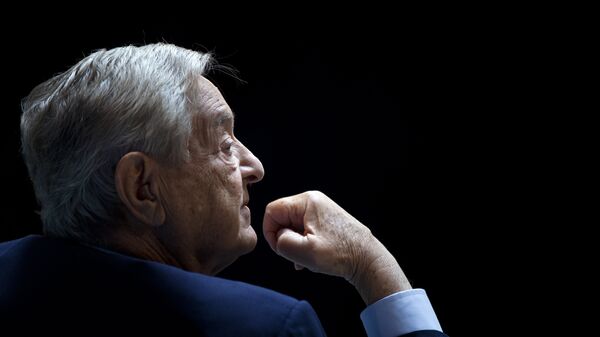 On 2 April, President Donald Trump harshly criticised the Green New Deal, which was rejected by the Republican-led US Senate on 26 March, by saying that it was "done by a young bartender" in a reference to Congresswoman Alexandria Ocasio-Cortez.

Speaking to Sputnik, Charles Ortel, a Wall Street analyst, investor, and investigative journalist, explained why the initiative has triggered a heated debate and what risks it is fraught with.

"Paltry details 'explaining' the Green New Deal, and subsequent comments by Ocasio-Cortez likening her radical proposals to the New Deal led by President Franklin D. Roosevelt starting in 1933, only underscore how little the firebrand member of Congress understands about economics, political reality, and history", Ortel highlighted.

Counterpunch: Trump and Barr Won't Give the Clintons a Pass Now – Analyst
To explain his point, the analyst referred to United Nations Conference on Trade and Development (UNCTAD) estimates, stressing that "the total amount of money invested across the entire world in capital projects by all governments, businesses, investment firms and individuals was approximately $20 trillion in 2017, an amount slightly larger than in each of the years 2013 through 2016".

He elaborated that in the US alone, all investors combined put a bit less than $4 trillion into capital projects during 2017. At the same time, according to American Action Forum preliminary estimates, the Green New Deal could cost "from $51.1 to $92.9 trillion between 2020 and 2029".

"So the suggestion that the Green New Deal might require $93 trillion dollars in funding means that Ocasio-Cortez wants Americans to finance a vague project equivalent in size to 23 and one quarter years' worth of annual capital spending, an amount that is absurd on its face", the Wall Street analyst highlighted.

Analyst Explains Why Time is Running Out for Soros
Ortel explained that the proposed Green New Deal can only succeed if all industrialised nations worldwide somehow agree to cooperate and coordinate efforts to curtail actions that actually harm the environment.

"Put differently, unilateral actions by the United States alone will have only marginal positive effects upon a planet whose land occupies approximately 30 percent of the Earth's surface area", he stressed.

In February 2019, Breitbart revealed that some of the organisations assisting Democratic lawmakers to promote the Green New Deal "have ties to financing from billionaire George Soros".

The question then arises as to why Soros, a financial expert, would back such an economically unrealistic initiative that is fraught with risk of throwing the US economy off balance.

"Investors, especially including George Soros, can profit when capital markets reverse, and when they swing wildly and 'unexpectedly' up and down", the Wall Street analyst pointed out.

Ortel opined that Soros and other financial speculators "may believe a 10 year move upwards from the March 2009 stock market lows (in the US) is overdue for downward correction".

"For decades, Soros has financed direct and indirect assaults against republican democracy and capitalism, couching his criticism as support for 'progressive' ideals", the investigative journalist said. "What I believe he and his allies really want is light-touch 'regulation' of globalist schemes by economically illiterate politicians including Maxine Waters, Ocasio-Cortez, as well as Republican denizens of the Washington, DC swamp".

'Soros Flouted US Charity Laws, Deserves Scrutiny' – Wall Street Analyst
He noted that "in good times and in bad times, Soros and fellow speculators can add to fortunes already amassed, particularly if they know early on, through whispers from political cronies, what directions legislators and others may take on key issues that affect capital markets".

Thus, unsurprisingly, Trump's policy aimed at creating new jobs and strengthening the US economy does not play into the hands of Soros-like financiers, according to the analyst.

"The Green New Deal, so far, is a frivolous snack, fed to a journalistic pack inclined to dislike anything President Trump achieves, who demonstrably knows little about economics and is scared off from performing rigorous analysis of hard numbers", Ortel underscored.

Meanwhile, liberal economists continue to predict new economic recession and even crisis in 2019-2020. Goldman Sachs and J.P. Morgan foresee recession in the second half of 2019, while The Guardian cites pessimists who expect nothing short of new financial crash in 2020.

According to Ortel, the American and global economy in general are long overdue for correction.

As for the US, the Wall Street analyst referred to "extraordinary measures that started as George W. Bush finished his second term, and expanded under Barack Obama (yawning government deficits and suppressed interest rates) have inflated a global bubble of unrealistically high asset values and excessive levels of debt".

Finance Expert on Why Debt-Fuelled Time Bombs Won't Blow Up World in 2019-2020
Simultaneously, the first signs of trouble are escalating on the opposite side of the Atlantic — in Europe, the analyst warned. According to Ortel, some individual nations, in particular, the UK, "are wisely trying to exit the European Union, fleeing burdensome regulations and bureaucracy, to regain a semblance of control over national destinies".

"Unlike in the United States, where banks have access to large, interest-free sums held in checking accounts, European banks inside individual nations do not have the same stock of resources to weather unexpected contractions in economic activity and/or in asset values", he emphasised.

"Here, signs are evident that trade is slowing and that tensions are rising between the US and China and in other bilateral relations that China has worldwide", he said, referring to Sino-American trade wars and simmering maritime disputes in the South China Sea.

Still, there is yet another reason why left-leaning MSM is circulating the idea of the looming crash, according to the investigative journalist.

The thing is that "sudden downturns in economic activity and/or stock market prices might hurt the political fortunes of President Trump and of economic conservatives in the Republican and Democratic Parties", he explained.

"Though challenged, the United States remains well-positioned to manage through economic and/or geo-political reversals. That said, credit and stock markets are long overdue for correction and few truly understand systemic risks posed by vast, multinational entities operating in the private and public sectors", the Wall Street analyst concluded.