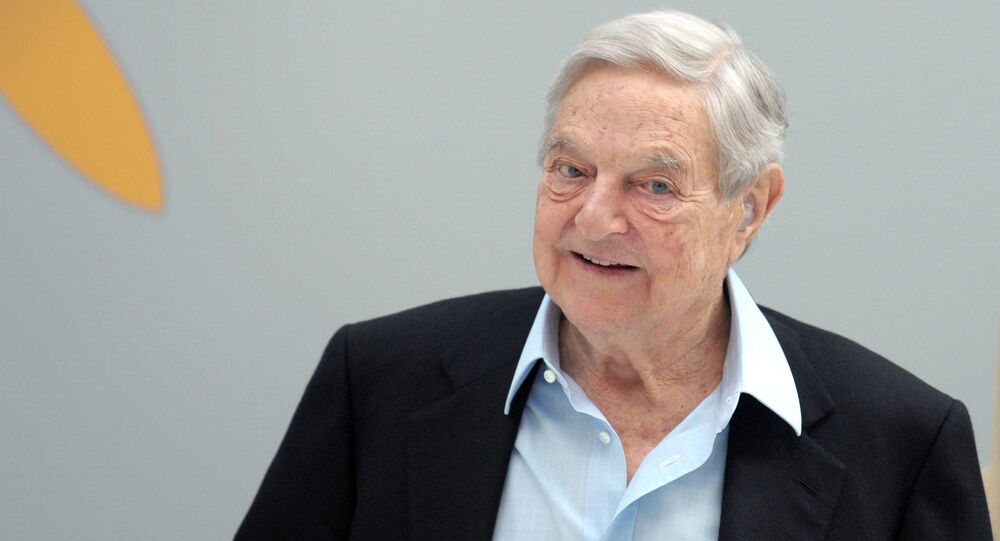 "The vast network of 'false-front' George Soros-backed 'charities' that actually seem to be political action organizations deserves coordinated scrutiny by nations including the US and Russia, among others, that likely have been severely damaged over many years," Wall Street analyst, investor and investigative journalist Charles Ortel told Sputnik.

On August 19, Judicial Watch, a government watchdog, tweeted that it "uncovered bombshell info showing that the Obama administration sent US taxpayer funds overseas to an organization supported by billionaire George Soros — which used the money to fund leftwing political activities benefiting the socialist government of Albania," referring to its April report and apparently signaling that it continues to keep an eye on the magnate.

​Earlier, the watchdog revealed that under Barack Obama, the US government used taxpayer dollars to fund the billionaire's controversial political activities in Guatemala, Macedonia and sued the US State Department and USAID for records about the funding and operations of George Soros's Open Society Foundations in Romania and Colombia.

READ MORE: Analyst Explains Why Times is Running Out for Soros

According to Ortel, George Soros has flouted US charity laws in several ways, for decades through his network of Open Society organizations and others.

"First, US charities (and he also supports many foreign ones) must be tightly controlled from bases located on American territory," the Wall Street analyst who has been investigating the Clinton Foundation's alleged fraud for the past few years pointed out. "Second, they may not engage in illegal activities of any kind. Third, they may not engage in partisan political activities. [Additionally] under one US law that is seldom enforced, citizens are not supposed to hold unauthorized negotiations with foreign governments with which the United States is in dispute."

Ortel underscored that Soros "has been a prolific donor to political causes inside and outside the United States" and has apparently violated all the aforementioned regulations.

Meanwhile, Soros has been boosting his lobbying activities in the US Congress, spending a record $16.2 million during Trump's first year. In Q1 and Q2 of 2018 Soros spent $2.52 million and $10.37 million, respectively, according to The Washington Free Beacon. For comparison's sake, between 2002 and 2012 Soros's non-profit spent $19.1 million on lobbying expenses.

According to the investigative journalist, this indicates that Soros and his liberal counterparts' influence has been steadily fading, which requires them to step up lobbying.

"In recent years, Soros and other politically active, globalist cronies may actually have been burning some of their considerable fortunes," Ortel said. "Rising influence of social media and declining influence of legacy media means that it may be tougher to lead masses of public opinion to outcomes desired by partisan donors, whether left-leaning like Soros, establishment like Koch, or populists like Trump and Bannon."

© AP Photo / Kevin Wolf
Viktor's Victory: How Hungarian PM Orban Sent Soros' Foundation Packing
Simultaneously, in the United States, and in other nations, people are growing to realize that Soros and other "advocates of unregulated globalism" have certainly enriched themselves, the analyst noted, adding that the middle and the working classes have largely been left out in the cold.

Indeed, the Hungarian government had previously forced Soros's office out of the country, lambasting the foundations controversial political activities in the country related to the refugee crisis. The American billionaire has come under heavy criticism from both foreign governments and US conservatives.

"This growing awareness likely helps explain why voters in so many nations already are upending establishment parties and the status quo to the evident shock of supposed 'thought-leaders' in academia, media, and in 'think-tanks,'" Ortel noted, expressing hope that "charity abuses and unwelcome foreign meddling in national elections will soon be exposed, prosecuted, and then regulated to the fullest extent practicable."

However, it appears that Soros is not going to give up: "In advance of the midterm elections, Soros has so far contributed at least $15 million to support Democratic candidates and causes," The New York Times announced in July. Besides, the media outlet has also been recently listed among the tycoons' beneficiaries: Soros has poured $3 million into the newspaper's stock holdings this year.