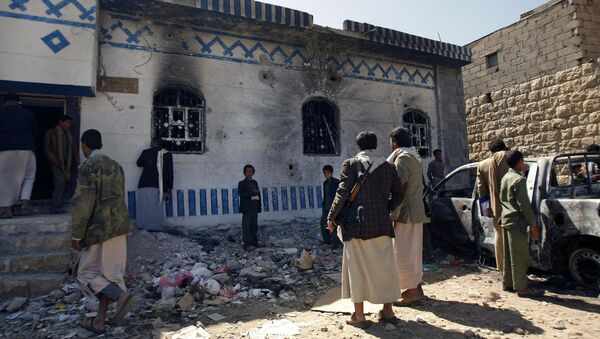 © AP Photo / Hani Mohammed
Subscribe
The UN has claimed that a number of allegedly Iranian-made weapons have been found recently in the territory of Yemen. Speaking to Sputnik, former Iranian diplomat Dr Seyed Hadi Afghahi explained how the supposed missile fragments had found their way to Yemen.

There are two goals the enemies of Iran are currently pursuing in the UN, Dr Seyed Hadi Afghahi, an Iranian political scientist, leading expert on the Middle East, diplomat and a former official of the Iranian Embassy in Lebanon, told Sputnik Persian.

US Senate Votes to End Military Assistance in Yemen War
A UN resolution that came into force in January 2016 prevents the Islamic Republic of Iran from importing and exporting weapons without the Security Council's approval.

"The Secretariat found that they had characteristics of Iranian manufacture and that their markings indicated production dates in 2016 and 2017", Guterres said at the Security Council's meeting. However, he avoided blaming Tehran for an apparent violation of the UN resolution.

Iran has been repeatedly blamed for arming the Houthi movement, officially called Ansar Allah, amid the ongoing civil war in Yemen that started in 2015. Still, Tehran vehemently denied the accusations. For their part, the Houthis have been subject to a separate arms embargo imposed on the militia in 2015.

"Until today, there have been lots of similar accusations against Iran, but none of them have been proven", Afghahi underscored. "It is worth recalling the statements of [ex-US Ambassador to the UN] Nikki Haley and [Israeli Prime Minister] Benjamin Netanyahu, which also concerned the supply of Iranian missiles to Yemen. It is worth asking these people: How could Iran supply missiles [to Yemen] if [the country] is closed on every side — Yemen's air, land and air borders are completely blocked?"

Analyst on Why Iran-Controlled Strait of Hormuz Remains US's Weak Spot
The former diplomat presumed, however, that if some debris of Iranian missiles had really been discovered in Yemen, then they had been supplied by Tehran before Yemen's blockade.

"In a short period after the resignation of [then] President Ali Abdullah Saleh, Iran had diplomatic relations with Yemen, within the framework of which we supplied weapons to Sanaa — before the beginning of the war and the intervention of the Saudi-led coalition of the Arab states", the political scientist elaborated.

Therefore, "if any fragments of missiles were found, they refer to the period before the start of the conflict (2014)", Afghani emphasised.

He further noted that if Iran had an opportunity to deliver weapons to the Ansar Allah, "then we would consider that an honour".

"Our Supreme Leader, Ayatollah Ali Khamenei, even said that if Yemen had not been blockaded, we would have supplied not one, but hundreds of missiles", the former official highlighted.

According to him, the issue of the alleged Iranian rockets was raised to exert further pressure on the Ansar Allah through Iran so that the Houthi leaders would make concessions to Saudi Arabia and ousted Yemeni President Abdrabbuh Mansur Hadi.

"These are to surrender the port of Al-Hodeida to the Saudis, to exchange or release prisoners, to lift the Houthi blockade on Taiz", he elaborated.

US to Resort to Use of Force if Iran Blocks Strait of Hormuz – Ex-CIA Officer
Yet another reason for the media fuss over the allegedly Iranian missile fragments is to get the "green light" from the UN Security Council to impose tougher sanctions on Tehran, the diplomat opined.

"At the same time, it is worth mentioning that from the very beginning of the conflict in Yemen Iran has declared its neutrality and its commitment to a peaceful settlement through intra-Yemeni negotiations and reconciliation of the [warring] parties", Afghani stressed.

The civil war in Yemen erupted in late 2014 — 2015 leading a huge civilian death toll and a humanitarian disaster in the country. In March 2015, Saudi-led coalition forces intervened into Yemen to support Yemeni President Abdrabbuh Mansur Hadi.

000000
Popular comments
Sure. No problem for the US and NATO to just start war when no aggression existed before.