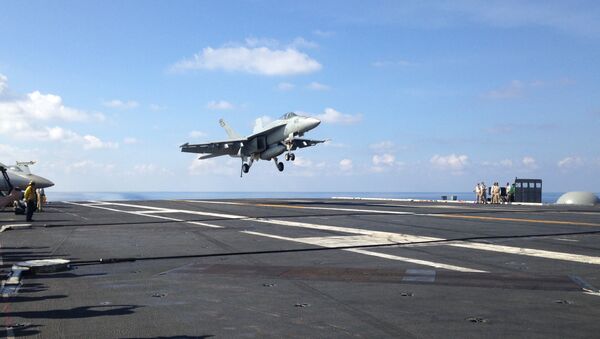 Ekaterina Blinova
All materialsWrite to the author
The US and Iran may find themselves in a hot conflict if Tehran delivers on its promise to close the Strait of Hormuz, Philip Giraldi, a former counter-terrorism specialist and military intelligence officer at the CIA, told Sputnik, explaining why tensions are likely to escalate even further by May 2019.

"It is a show of force to pre-empt any aggressive action by Iran, particularly if they try to interfere with traffic in the Strait of Hormuz, as they have threatened", says Philip Giraldi, a former counter-terrorism specialist and military intelligence officer at the CIA, commenting on the USS John C. Stennis' deployment in the Middle Eastern region. "Aircraft carriers are always moved around to wherever there is any possibility of conflict".

On 8 December, a carrier strike group led by the Nimitz-class super-carrier USS John C. Stennis arrived in the Arabian Sea. Earlier, The Wall Street Journal opined that the US aircraft carrier strike group had been sent to the region "in [a] show of force against Iran".

US Deploys Carrier Strike Group to Middle East Amid Iran, Syria Tensions
Indeed, Washington has not deployed a US aircraft carrier in the Persian Gulf since March 2018. The timing of the operation coincided with the escalation of tensions between Tehran and Washington.

On 2 December, Secretary of State Mike Pompeo announced that the Islamic Republic of Iran (IRI) had tested a medium-range missile that is "capable of carrying multiple warheads".

In response, Foreign Ministry spokesman Bahram Qasemi rejected the allegations, saying that Iran's missile program is "defensive in nature" and by no means violates any of UN Security Council's resolutions.

Tehran has repeatedly threatened to block the Strait of Hormuz in response to Washington's sanctions and assertive foreign policy course. In May 2018, the US unilaterally withdrew from the Joint Comprehensive Plan of Action (JCPOA), commonly known as the Iran nuclear deal, and resumed sanctions against the Islamic Republic.

Iran Deploys Fleet to Gulf of Aden as Rouhani Threatens to Block Hormuz Strait
Meanwhile, Tasnim reported that the Sahand, a domestically-made stealth destroyer, had joined the Iranian navy in the Persian Gulf on 1 December. Reportedly, the warship is equipped with surface-to-surface and surface-to-air missiles, anti-aircraft and anti-ship guns, and can be effectively used in electronic warfare.

On 4 December, Iranian President Hassan Rouhani yet again signalled readiness to close the Strait of Hormuz, which remains the world's busiest sea lane for oil shipments, if Trump disrupts the IRI's crude trade.

"If Iran does try to interfere with traffic or even block the straits there will be a response from the US and its Arab allies in the Gulf", Giraldi emphasised. "I believe they would hit a target that is military, much like the cruise missile launches in Syria, to serve as a warning. If the situation worsens, they would hit a military target run by the Revolutionary Guards hard. The situation could easily escalate from there".

Although the deployment of the USS John C. Stennis in the Middle East was prescheduled according to The Wall Street Journal, it is largely seen as a slap in the face of Iran.

Why US-Iran Tensions May Further Escalate in May 2019

"I believe that when the exemptions [from Iranian oil sanctions] expire in May 2019 the conflict will escalate", the CIA veteran foresees. "Most of the buyers of Iranian oil will go along with the US demands, but some, including Turkey and China (possibly also India), will not. The United States will be tempted to strike Iran militarily to warn those who are hesitating that it is serious about the sanctions".

Previously, Trump imposed the next batch of sanctions on Iran, particularly targeting the country's oil industry. However, to avoid the upsurge in crude prices, the White House granted waivers to 8 countries. The exceptions are designed to last 6 months.

The fuss raised by the US over Tehran's missile programme may affect EU states, which continue to demonstrate commitment to the JCPOA.

"The ballistic missile program is a red herring as Iran does not possess the warheads for the missiles that can do real damage", Giraldi underscored. "Everyone understands this, but the US and Israel are exploiting the program to raise the threat level".

According to the former intelligence officer, "Pompeo focuses on the missiles because he knows that otherwise Iran is in full compliance with the JCPOA and all other international agreements".

"Die Welt is wrong about the missiles being a violation of either the JCPOA or the UN Security Council resolution", the CIA veteran highlighted. "The Europeans might indeed negotiate with Iran using the missiles as a bargaining point, but, for the moment, I am afraid that they will go along with the bad policies being pursued by the United States".