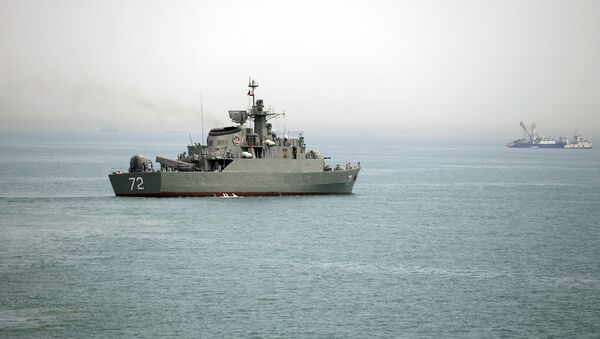 Ekaterina Blinova
All materialsWrite to the author
Hassan Rouhani's threat to close the Strait of Hormuz was meant to show defiance and counter-intimidation against Washington's sabre-rattling, Ghassan Kadi, a political analyst told Sputnik, emphasising Iran's unique geographical position that allows it to maintain control over the Persian Gulf.

"Before Khomeini's Islamic Revolution [of 1979], the Shah of Iran was known as 'the policeman of the Gulf', i.e. America's policeman, and having him on its side, the US did not 'need' a huge military presence there", Ghassan Kadi, a political analyst of Syrian origin, told Sputnik, commenting on the mounting tensions between Washington and Tehran in the Persian Gulf.

Although the US had long called the shots in the region the Islamic Revolution tremendously affected the balance of force, according to the analyst.

"This changed dramatically after the fall of the shah", he continued. "And even though the formerly deactivated American Fifth Fleet was not reactivated till 1995, the American naval presence returned with force to the region. And when Iran Air Flight 655 was downed on 3 July 1988, it was shot down by American Navy vessels operating in the Gulf".

US to Resort to Use of Force if Iran Blocks Strait of Hormuz – Ex-CIA Officer
The Airbus A300 that flew from Tehran to Dubai, through Bandar Abbas, was shot down by an SM-2MR surface-to-air missile fired from the USS Vincennes, a Ticonderoga-class guided missile cruiser.

The last essential US naval build-up in the region preceded Operation Desert Storm in 1990-1991, Kadi recalled.

Commenting on the latest deployment of a carrier strike group led by USS John C. Stennis in the Persian Gulf, he opined that "the arrival of a super carrier, or two, does not constitute a significant change to the status quo, and can only be seen as an action that seeks to intimidate the Iranians, no more".

The group arrived in the region on 8 December and took part in the joint naval exercises with the Essex Amphibious Ready Group (ARG) on 12 December in the Arabian Sea. According to The Wall Street Journal, the dispatch of the John C. Stennis Carrier Strike Group (CSG) was aimed at intimidating Tehran. 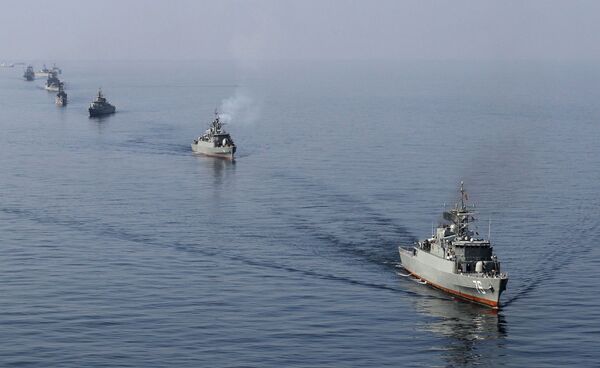 Blockade of the Strait of Hormuz: A Last Resort for Iran

Iran's strategic location allows it to maintain control over the Persian Gulf and particularly over the Strait of Hormuz. Thus it is hardly surprising that Tehran uses it as a bargaining chip amid the escalation of tensions between the US and Iran, prompted by the Trump administration's sanctions spree against the Islamic Republic.

Earlier Iranian President Hassan Rouhani signalled that Iran would block the Persian Gulf in case the US tried to prevent Iran from selling crude to its customers.

"A blockade of this nature, if it happens, will not only hurt America and its oil-exporting Arab allies and all nations that import oil from the Gulf, but it will also hurt Iran itself and its own customers; namely China, India, Japan, and South Korea", Kadi opined.

Iran Deploys Fleet to Gulf of Aden as Rouhani Threatens to Block Hormuz Strait
According to the analyst, "Iran will use this card as a last resort, and because Iran does not have super carriers to send into the Gulf of Mexico, threatening to block the Strait of Hormuz is also meant to be symbolic and to express defiance and counter-intimidation".

Kadi noted that Iranian lawmakers and military spokesmen keep reiterating that the Islamic Republic is quite capable to defending itself.

"Given the imbalance of power between Iran and America, it is highly unlikely that Iran will strike first. It would be foolhardy for Iran to deliberately opt to draw first blood", the analyst emphasised.

So, what will happen when the exemptions expire in six months?

"Let us ask a slightly different question here, will China succumb to America's demands in the South China Sea?" Kadi asked. "To say the US is granting China a temporary waiver to import Iranian oil is indeed laughable. I cannot see India succumbing either after the six-month waiver expires, it will be interesting though to see what Japan will do".

According to the analyst the escalation of tensions over Trump's oil sanctions against Iran is quite probable.

"Come May 2019, unless the impasse is somehow resolved, it may not just cause an escalation between America and Iran only, but also with China and possibly India; albeit unlikely a military one", he suggested.

US Sees Progress in Urging EU to Sanction Iran's Missile Program - State Dept
In the beginning of December, both Secretary of State Pompeo and German daily Die Welt raised the alarm over Tehran's missile programme with the media outlet claiming that Iran's rockets could reach Europe.

The analyst believes that the timing of this hysteria looks rather suspicious.

"Are Pompeo and Die Welt now admitting that Iran did not have missiles that could reach Europe back then, but they do now? Was the West giving inaccurate assessments back then or now or on both occasions?" he asked.

The political analyst wonders whether European MSM did "a study into the increase in the number of threats Iran is receiving".

"The real question about where will the EU stand vis-à-vis Iran is more about whether or not it will adopt the American narrative, rather than whether or not it genuinely believes that Iran poses a military threat", he concluded.