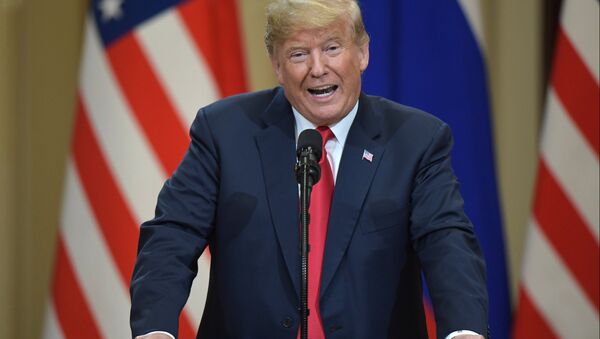 On the eve of his wide-ranging interview with Fox News, President Donald Trump took to Twitter, as is his wont, to lambast the “fake news” media as “the Enemy of the People.”

During a sit-down interview with Donald Trump that was aired on Sunday, Fox News host Chris Wallace told POTUS that although most presidents expressed frustration with the media coverage, nobody had called the press “the enemy of the American people.”

“The fake news is the enemy – it’s fake, it’s phoney. I don’t mind getting bad news if I’m wrong,” Trump responded, clarifying that he did not refer to all media as the “enemy,” but certain outlets that he considered “fake news.”

But Wallace kept pushing Trump on the topic, claiming that “leaders in authoritarian countries like Russia, China, Venezuela, now repress the media using your words.”

Trump says it's "100 percent true" that "the fake news" is "the enemy of the American people."

Wallace responds by pointing out his rhetoric has already inspired authoritarian leaders.

TRUMP: "I can't talk for other people…the news about me is largely phony. It's false." pic.twitter.com/q53quoCbhz

As Trump said that he couldn’t speak for other countries, Wallace interrupted him, suggesting that he was viewed as a “beacon for repression around the world” while citing his crusade against the fake news media.

WALLACE: The President doesn’t get to decide what’s fair & what’s not.

TRUMP: I can tell what’s fair and not & so can my people & so can a lot of other people.

Trump further tried to explain that his attacks on the media were targeting only unfair and false coverage:

“The news about me is largely phoney. It’s false. Even sometimes they say ‘sources say’ – there is no source in many cases. […] Fake reporting is what’s tearing this country apart,” he said.

Social media users appeared to be irritated by the fact that Wallace called Trump a “beacon for repression,” with the lion’s share of netizens calling the US president a “beacon of hope”:

You mean as a beacon of hope?

The truth beacon. The press is the enemy of the people. Period.

Me to Chris Wallace: Trump is the beacon of light fighting the darkness of repression here and around the world.

P.S.: get f**ked you Deep State puppet. We the people are the news now.#Qanon #MAGA https://t.co/z9HZT0VAoa

…and heaping praise on the 45th POTUS for exposing media bias – something, which they said, would go down in history:

The most important aspect of Trump’s presidency for this country has been his attack and exposure of our media bias. A media that no longer pursues truth because of political and ideological biases is a threat to our liberties. This will be his greatest legacy.

Mainstream Propaganda Media is the "beacon for repression," not Trump for exposing them.

@FoxNewsSunday Trump is RIGHT! Fake News is Fake News. We the people know what the "Media" is all about. The game is up!!!! We are awake. Chris Wallace is part of the fake news.

Some pointed to the fact that Wallace seemingly couldn’t grasp Trump’s idea of fake news:

#Chriswallace @FoxNews Mr. Wallace nice interview with President Trump, however I was very disappointed that you played dumb like you had no idea what he meant by Fake News. You said "critical" but he meant "dishonest lying" Check the number twisted, false stories about him.

Gotta say, Mr. Wallace, you have mistakenly aligned with the press “in solidarity, one mind, one body” no matter their behavior. You have failed to acknowledge that fake news rages on with many in your profession having lost their reasoning minds. Get Real, Get Trump’s Point.

#FNS Watching Chis Wallace interview Pres. Trump. Why is Wallace not listening to the President's answers, particularly in re Fake News. Wallace is not hearing the distinction between fake news and honest news. Seems he (Wallace) only wants to criticize.

A few Twitterians spoke out against Trump’s rhetoric, lauding Wallace for the interview:

Chris Wallace nailed Trump on his childish and dangerous attitude toward the press and freedom of speech! Way to go! He clearly outlined Trump’s Fake news mantra for what it is, purely cutting down news he doesn’t like.

Chris Wallace, the rare voice of sanity coming from @FoxNews.

Since taking office last year, Donald Trump has consistently been blasting media outlets for inaccurate coverage, repeatedly stressing in his tweets that it’s the fake news that is “the enemy of the people.”

In January 2018, POTUS even announced the winners of his “Highly Anticipated 2017 Fake News Awards,” with The New York Times topping the list of 11 media outlets.