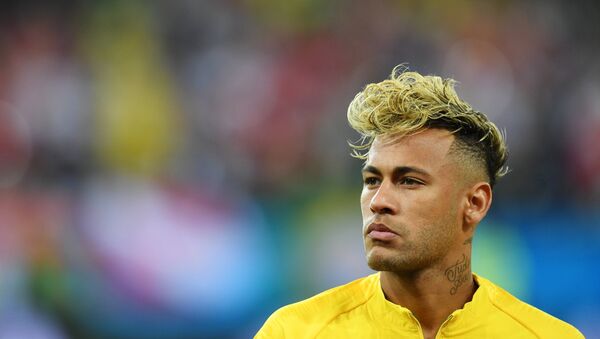 © Sputnik / Grigoriy Sisoev
/
Go to the photo bank
Subscribe
Ahead of the 1/8 final match against Mexico at the 2018 FIFA World Cup, former Brazilian midfielder Gilberto Silva has shared his good feelings about his country’s chances to snap the top prize. He particularly liked the fact that the Brazilian national team is no longer the “one man show” of the world’s most expensive player, Neymar.

Gilberto Silva, who helped Brazil's team become World Champions in 2002, has told the English newspaper Mirror that it’s a good thing that his country’s top football star and the world’s most expensive player, worth  $261 million, Neymar isn’t the sole locomotive of the Brazilians on their way to the  championship any more.

“What I like about this Brazil team is that it’s no longer relying on Neymar. It’s important for him as well, because he’s sharing responsibility with other players and they’re sharing with him. He’s not alone, because it’s too much pressure for one person. He can’t win alone,” Silva told the media.

According to him, it’s time for Philippe Coutinho, Gabriel Jesus up front, Willian and Roberto Firmino who can come on. The stakes for the Brazilian team, which was defeated 7-1 in semi-finals by the Germans at the World Cup four years ago on their home soil, are high now.

“They’re progressing all the time, but every game from now on is a final. They can’t afford to waste so many chances and start games slowly and then wake up too late. If you lose, you’re out. They must have the right mentality,” Silva stressed.

Although Silva admitted that Brazilians will “always feel ashamed” of the 2014 crush, which “shocked the world.” He called on his team to look forward rather than live in the past.

“They have to play the games of their lives now, because it’s worth any sacrifice to win the World Cup,” Silva said, cited buy the Mirror.

Brazil faces Mexico in a game for the ”ticket” to the quarterfinals in Samara on July 2.

Round 16 at the 2018 FIFA World Cup, hosted by Russia, began on June 30. Croatia, the Russian national team as well as France and Uruguay have made it to the next round, while Argentina with its star Lionel Messi and Portugal, led by another football celebrity, Cristiano Ronaldo, Denmark and Spain were shut out from the tournament in 1/8 final games.