Italian Deputy PM: Very Existence of United Europe to be Decided Within the Year 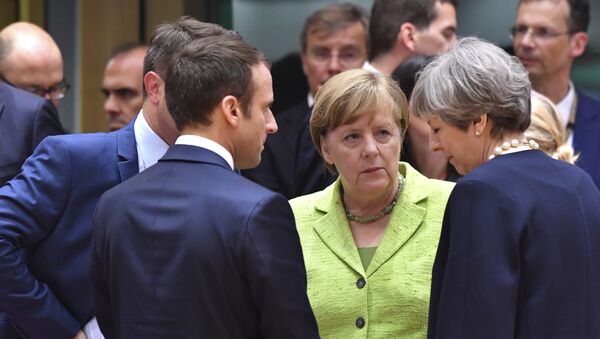 Ahead of the EU summit at the end of June, where the latest disagreements within the bloc over migration policy are expected to be on the agenda, Italian Interior Minister Matteo Salvini has lambasted Paris for “lecturing” Rome and resisted Germany’s plans to turn away refugees which have been registered in other countries.

The leader of the Italy’s Euro-sceptic League party, Matteo Salvini, who was appointed the Deputy Prime Minister and Interior Minister at the beginning of June, has warned that the future of the European Union is at stake in an interview with the German weekly news magazine Spiegel. According to the top Italian official, the upcoming talks on the joint budget and the results of the European elections, scheduled for 2019, will show if the whole creation “has become meaningless.”

"Within a year, it will be decided whether a United Europe will still exist or not," Salvini told the German media outlet.

He lashed out at the way decisions are made within the EU, lambasting the reform drafts waived by the French and German leaders ahead of the upcoming EU summit.

"Drafts written in advance by other countries and then sent by e-mail are not in line with our working style," Salvini told the German magazine.

Speaking on the differences among the bloc members, Salvini has slammed Berlin’s plan to deport asylum seekers from Germany if they have been registered in other EU countries or already denied asylum in the country.

"We can’t take a single person more. On the contrary, we want to hand over a few," said the leader of the League party, advocating for harder stance on migration, in the interview with Spiegel.

Italy, which has been the EU's principal gateway for migrants coming from Africa across the Mediterranean, will be among those states, impacted by the proposal of Salvini’s counterpart from Germany, Horst Seehofer.  His “Masterplan for Migration” has already caused a row within the long-time alliance between Merkel’s Christian Democratic Union and Seehofer’s Bavarian Christian Social Union, and put Germany's coalition government in jeopardy.

While the CSU backed the “migration masterplan,” Merkel has refused to accept his suggestions, and continues to push for a Europe-wide solution to the migration crisis instead. According to the Chancellor, this plan could undermine the principle of free movement within the EU and violate certain international laws on refugees. Seehofer’s two-week ultimatum to sort out the issue has been accepted by Merkel: on July 1, after the EU summit, Merkel is due to inform the CDU leadership about the state of her talks with the European states that have been most affected by the migration crisis.

Salvini admitted he’s aware that he can contribute to Merkel’s downfall, but opposed the allegation that he had such an intention. He also stated that the refugee issue is not the only apple of discord in relations between Rome and Berlin, pointing at significant disagreements over economic policy, European banking reform and the German foreign trade surplus.

No More Lessons From France

Merkel wasn’t the only one at whom the Italian Deputy Prime Minister took aim, as he also lambasted French President Emmanuel Macron, stating France should finally stop "lecturing" Italy. The two countries recently had a diplomatic row over the NGO ship Aquarius, which had over 600 African migrants aboard. France criticized Italy for rejecting the vessel, which later led to an exchange of jibs and finger-pointing for irresponsibility until Macron and Italian Prime Minister Giuseppe Conte settled the issue during their meeting.