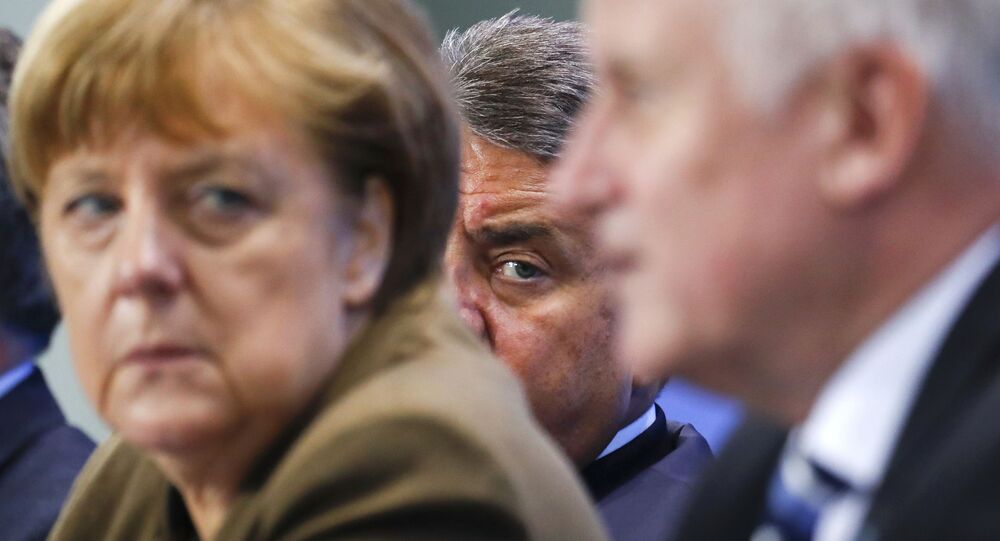 Horst Seehofer, German Interior Minister and the head of Bavaria’s Christian Socialist Party (CSU) and Chancellor Angela Merkel have been engaged in a heated debate over the country’s migration policy.

Speaking with the newspaper Passauer Neuer Presse on Friday, Seehofer warned Angela Merkel against dismissing him as interior minister over a unilateral approach to immigration in Germany.

The CSU leader elaborated that if it happened it would mark the first time that “looking after and taking care of the security and order of the country is the reason given for firing a minister.”

© AFP 2020 / Christof Stache
German Government in Jeopardy Amid CSU/CDU Row Over Tougher Refugee Policy
Seehofer stated that his party backed his “migration masterplan” that envisages turning away asylum-seekers at the German border if they have registered in another EU member-state or were previously denied refuge in Germany. Merkel, however, has refused to accept his suggestions, pushing for a Europe-wide solution to the migration crisis instead.

The minister proceeded to say that the chancellor might dissolve the parliament rather than dismiss him, adding that the CSU’s support is “more important than any office.”

"I am the leader of the CSU, one of the three coalition parties, and act with the full support of my party. If the chancellery is not satisfied with the interior minister's work, then the coalition should end," he said.

Tensions in the German Bundestag have been running high since Seehofer and Merkel have been at loggerheads over asylum policy. During a parliamentary meeting last week, the CSU leader reportedly warned Merkel that he would use “ministerial authorization” to unilaterally implement his “masterplan” to clamp down on migration to Germany and toughen border controls.

Merkel, for her part, believes that this plan could undermine the principle of free movement within the EU and violate certain international laws on refugees, but stated that she hoped to reach a compromise with Seehofer and his party on the matter.

The interior minister has given Merkel two weeks to find an appropriate solution to the issue at the EU level before he orders border police to start sending back asylum seekers. The ultimatum was accepted by the chancellor: on July 1, after the EU summit, Merkel is due to inform the CDU leadership about the state of her talks with the European states that have been most affected by the migration crisis.

In the wake of the 2015 migration crisis in Europe, Seehofer harshly blasted Merkel’s decision to open Germany’s borders and take in refugees fleeing conflict zones.