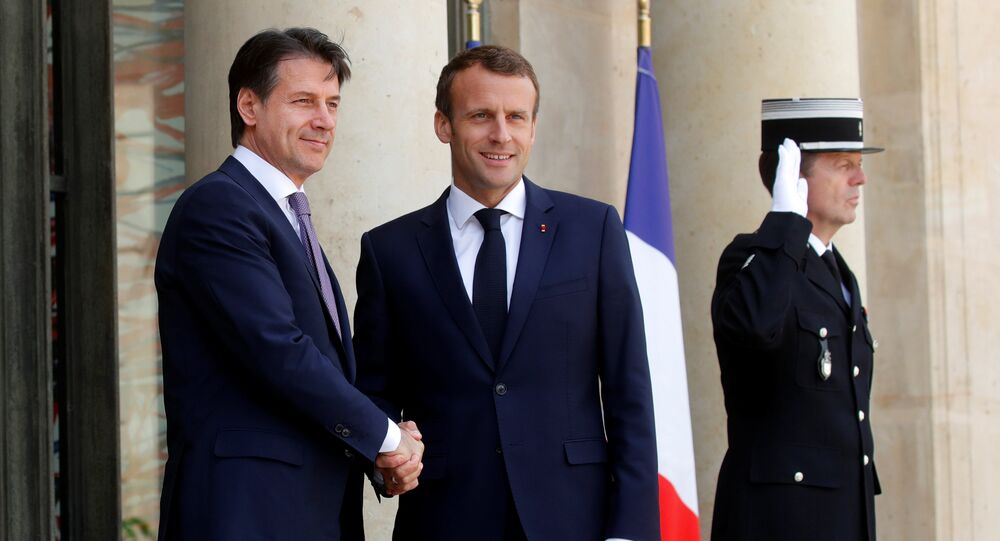 The meeting between the new Italian prime minister and the French president was jeopardized by a war of words following Rome's decision to deny vessel carrying some 600 migrants rescued in the Mediterranean entry to its ports.

During the press conference after the meeting with Italian Prime Minister Giuseppe Conte, French President Emmanuel Macron noted that talks of "axis" countries on migration are a reminder of "Europe's unfortunate past history," referring to the earlier statement of Austrian Chancellor Kurz that German, Austrian and Italian interior ministers form "axis" against illegal immigration.

"You were talking about an axis. I don't trust these catchphrases which did not bring us luck in the course of history," the French president said.

Speaking further on German Interior Minister Horst Seehofer's proposal to work with Austria and Italy at the ministerial level on migration, Macron stressed that "a country becomes committed through the words of its head of government or it head of state."

According to Macron, the EU lacks solidarity and efficiency concerning migration. He added that the European borders must have better protection, whereas the mechanism of granting asylum must be unified. French president further pointed out that Europe's response to migration crisis was outdated and reform was needed.

Italian prime minister, in turn, agreed with his "friend Emmanuel" Macron and vowed to propose "radical paradigm change" in the EU's handling of migration issues. He also called for the European states to concentrate the EU's processing of migrants' asylum claims in the countries of origin and transit.

"We should create European centres in the countries of departure," Conte stressed, referring to the countries in Africa and the Middle East that have seen an exodus of their population towards Europe.

The meeting between French and Italian head of states comes amid a bitter row between the countries over Rome's refusal to accept Aquarius rescue vessel with over 600 migrants aboard.

© AP Photo / Olivier Matthys
Merkel: Berlin Ready for Compromise With France to Reform Eurozone
As for financial matters, Macron expressed hope to achieve an agreement on the eurozone banking union in the "coming weeks".

Italian prime minister stressed that Rome was in favour of making progress on risk-sharing in economic governance of the eurozone.

The banking union is a step towards a monetary union in Europe which would allow to apply the EU banking rules in all of the countries participating in the union. The idea to create a banking union emerged after the 2008 financial crisis and the following sovereign debt crisis.