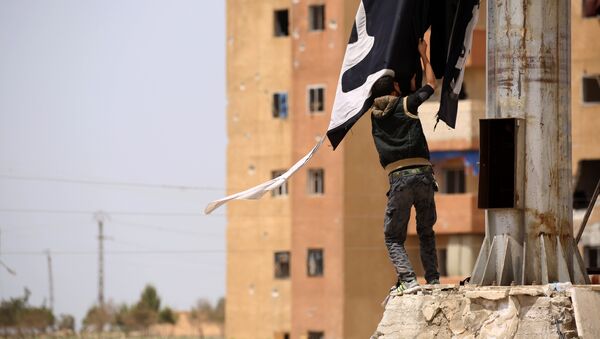 The Syrian Democratic Forces (SDF), backed by the US-led coalition, reportedly exchanged foreign jihadists they'd captured, including Europeans, for their own members who'd been taken by Daesh* groups, after the home countries of the foreign fighters refused to take responsibility for them.

In 2017 the Kurdish-led Syrian Democratic Forces (SDF), backed by the Western coalition, released dozens of detained Daesh* jihadists, along  with their wives and children, including German, French, Moroccan, Belgian and Dutch nationals, to the terrorist groups, according to the UK Telegraph. The media that revealed information about the secret swap deals between the SDF and the terrorist organizations that underscored concerns about these fighters returning to Europe.

The SDF, which still holds British and European nationals in its detention centers, informed the newspaper that it agreed to the swap deals because the SDF lacks the capacity to hold the captives indefinitely. According to the rebels, they have requested that the Western countries take responsibility for their nationals and take action, but received no response.

The Middle East Eye, citing the earlier comments of SDF spokesman Gabriel Kino, reports that rebels have captured thousands of Daesh* fighters of both Syrian and foreign origin. They reportedly use the evidence obtained from the prisoners in operations against the ISIS fighters, but have no clear plan what to do with them going forward.

"We send letters to ask foreign governments to take these foreign fighters back and put them on trial, but so far we have not received any responses," Kino said, cited by the MEE.

So far, there’ve been three secret swaps between the terror groups and the SDF. In February, one involved 200 Daesh militants, including Chechens, Arabs, a number of French nationals and at least one German, who were sent back to the terrorist groups. In April the list of exchanged prisoners included 15 jihadists, 40 Daesh wives and children, including Moroccans, French, Belgian and Dutch nationals. The latest deal took place this June. Further exchanges are doubtful, as the negotiators reportedly refused to mediate in talks after 4 out of the 15 deal-makers were assassinated.

The US-led anti-Daesh coalition, which has yet to comment on the media report, has been carrying out military operations against the terrorist group in Syria and Iraq since 2014. While the coalition's strikes in Iraq have been conducted in cooperation with Iraqi officials, those in Syria have not been authorized by the government of President Bashar al-Assad or the United Nations Security Council.

In Syria, the US has been providing local Kurds, who comprise the lion's share of the SDF, with weapons to fight the Daesh terror group. On May 1, the SDF and the US-led coalition launched Operation al-Jazeera Storm to clear Syria’s eastern border of Daesh terrorists, who had regrouped there after losing control over Raqqa. The first stage of the operation successfully ended in the liberation of the town of al-Baghuz Fawqani in the province of Deir Ez-Zor, the coalition said.

An SDF source, who spoke on condition of anonymity, told Sputnik that the United States has been boosting its military presence in Deir ez-Zor recently. To date, the US has sent a total of 4,800 trucks loaded with weapons and armored vehicles to them.