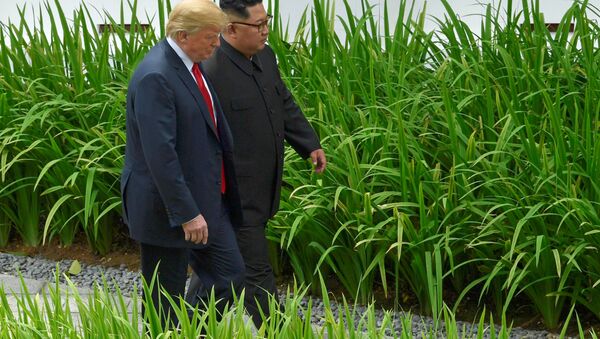 US President Donald Trump and North Korean leader Kim Jong-un have held their first ever meeting in Singapore. Their one-on-one meeting lasted for 45 minutes and was followed by lunch and an expanded meeting, which included delegations from both sides. Sputnik spoke with Victor Teo, professor at the University of Hong Kong, about the meeting.

Sputnik: Can you give us the latest updates of what was said at the press-conference?

Victor Teo: They have signed an agreement that is very similar in wording to the agreed framework that they signed in 1994, but to a large extent I think everybody is very curious about the substantive details as to this agreement. The press has been pressing the president for details, particularly with regards to issues like the denuclearization deal, issues like human rights and to a large extent the president has been answering all these questions.

Sputnik: What do you think are the most significant elements of the deal that they did sign? What has come out already about what was in that deal?

Victor Teo: I think the most significant thing is that a sitting American president has actually flown in and met with the North Korean leader; this is something that has never been done. So this in itself is a significant achievement. It is an indication that both the United States and North Korea are actually interested in coming to talk about the issue.

So to a large extent, it exhibits the sincerity on both countries. It also enables both leaders, in particular President Donald Trump, to be able to speak to the domestic political opponents at home and this summit actually helps, lends certain sense of legitimacy to his presidency. Now with regards to the substantive achievements, I think one of the things that came out of today’s meeting is that both countries have committed to the denuclearization of the Korean peninsula.

Obviously this is put in writing in the four point agreement and President Donald Trump has indicated that he understands what the DPRK’s concerns are about, in particular Secretary [of State Mike] Pompeo has actually said that the US has understood what DPRK’s security concerns are and that the Libyan model wouldn’t apply. That means that the Americans want to give the North Koreans a certain amount of security reassurance in exchange for North Korea’s denuclearization. The North Korean leader has indicated that he will actually undertake this denuclearization effort seriously.

So a concrete thing that has come out is that President Trump says that Marshal Kim has agreed to destroy a missile testing facility, where they make the missiles and until complete denuclearization is undertaken, sanctions will remain in place.

So this is the kind of thing they are talking about. The president has also commented that his national security team will be meeting next week to work out the details of denuclearization.

The views and opinions expressed by Victor Teo are those of the speaker and do not necessarily reflect those of Sputnik.