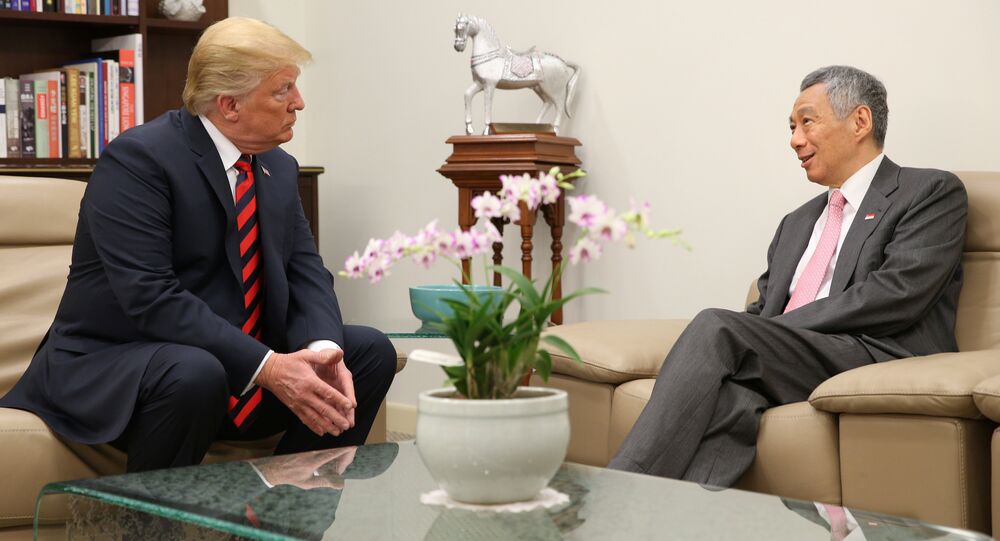 "Congratulations on the successful conclusion of a historic summit meeting between the Democratic People’s Republic of Korea and the United States. The joint statement that you signed today with Chairman Kim Jong-un is a dramatic step forward. It is a crucial first move in the long journey towards lasting peace and stability on a denuclearized Korean Peninsula," Lee Hsien Loong said in a congratulatory letter to Trump posted on Facebook.

Lee also expressed his gratitude that Singapore had been chosen to host the event and wished both Pyongyang and Washington success in implementing the agreement.

An analogous letter was sent to Kim.

Earlier in the day, Singapore hosted a US-North Korea summit, which consisted of the Trump-Kim one-on-one meeting and subsequent negotiations in the expanded format. The two leaders signed a document demonstrating their commitment to establish new bilateral relations and to build a lasting peace on the Korean Peninsula.

© REUTERS / Tyrone Siu
Why Singapore? City-State’s Neutrality Paves the Way for DPRK Economic Opportunity
The US and North Korean leaders agreed to proceed with Pyongyang's denuclearization, which will be verified by the US experts and international organizations. Trump said that anti-Pyongyang sanctions were to remain in place for now, but did not rule out the possibility of lifting the restrictions when the denuclearizing process is achieved.

Trump also pledged to stop the US-South Korea war games, which he called "provocative" and "inappropriate" under the circumstances of negotiating a deal with Pyongyang.