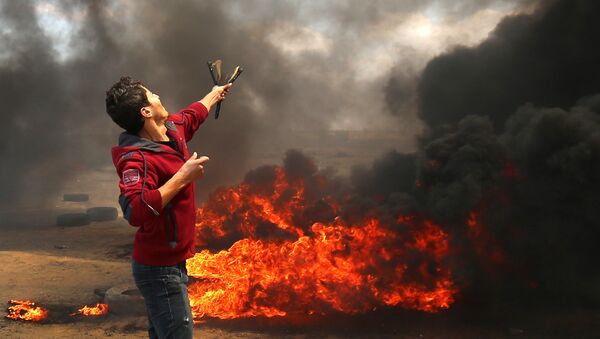 Violence in the Gaza Strip shows no sign of abating as at least two Palestinians have been killed and 400 others more injured in fresh cross-border clashes with the Israeli forces in the area.

During the UN Security Council's emergency meeting, most ambassadors expressed concern over the use of force by Israel which Swedish envoy to the UN Olof Skoog said should be exercised with restraint, a stance that was supported by his colleagues from China and the Netherlands.

While French envoy Francois Delattre said that "the situation in the Middle East is close to a perfect storm," his British counterpart Karen Pierce called for an independent investigation into Monday’s violence. 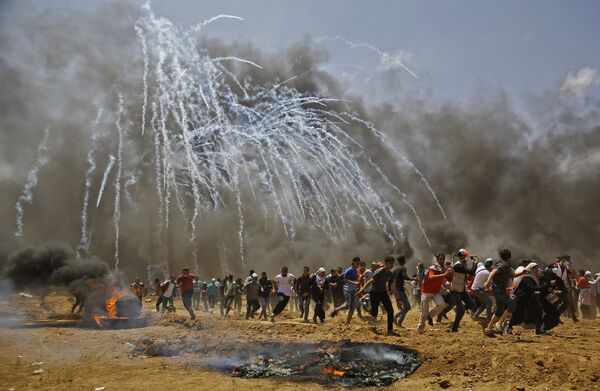 Palestinians run for cover from tear gas during clashes with Israeli security forces near the border between Israel and the Gaza Strip, east of Jabalia on May 14, 2018
© AFP 2022 / MOHAMMED ABED

Pierce was echoed by Bolivia's envoy Sasha Llorenty who said that "the unilateral decision by the United States to move its embassy to Jerusalem does nothing but inflame spirits."

"The United States, which supports the occupying power, has become an obstacle to peace. It has become part of the problem, not part of the solution," Llorenty stressed.

UN Middle East peace envoy Nikolay Mladenov, in turn, underscored that there was "no justification" for the violence in Gaza.

US Ambassador to the UN Nikki Haley, for her part, defended Israeli troops' actions and blamed Hamas for the violence on Gaza's border with Israel. "Make no mistake, Hamas is pleased with the results from yesterday," she said, adding that the US decision to move its embassy to Jerusalem was the right thing to do.

Russian Foreign Ministry spokeswoman Maria Zakharova has, meanwhile, said that Russia is concerned about the escalation of the situation in the Gaza Strip and calls on all parties to show restraint and refrain from steps that provoke tension.

She stressed that Russia's position on Jerusalem remains unchanged and that Moscow stands for a two-state solution.

Earlier, the US blocked the UN Security Council motion calling for a probe into the deaths of Palestinians killed in violent clashes with the Israeli forces on the Gaza Strip border.

Palestinian Leader Rejects US Peace Mediation Amid Israeli 'Massacres' in Gaza
The rallies intensified after the opening of the US embassy in Jerusalem on Monday, when at least 59 Palestinians were killed and more than 2,000 others injured.

The then Jordanian-controlled East Jerusalem was seized by Israel during the 1967 Six-Day War. 13 years later, the Israeli parliament approved the Jerusalem Law proclaiming the entire city Israel's undivided capital.

The international community does not recognize the annexation, calling for the status of Jerusalem to be agreed upon with the Palestinians, who claim its eastern part as the capital of their future state.