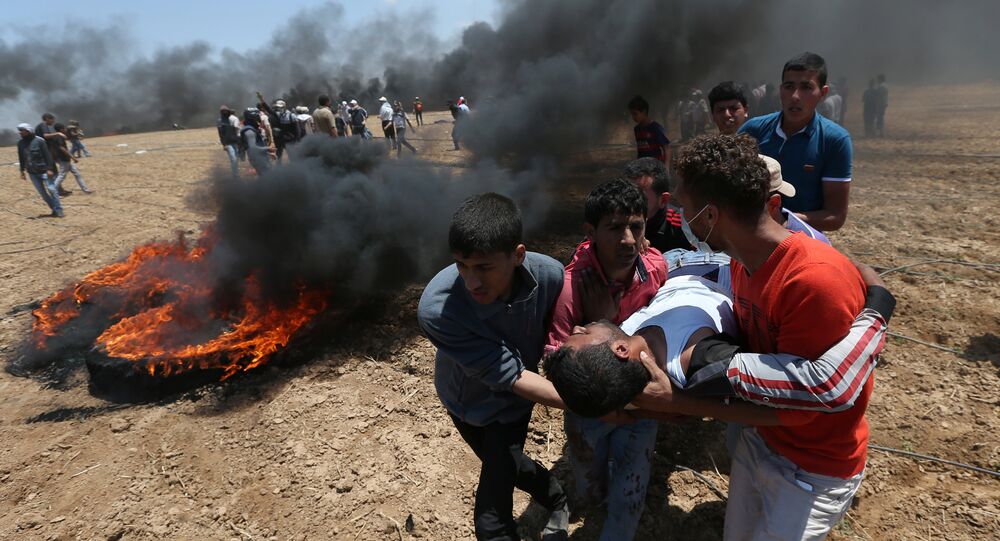 MOSCOW (Sputnik) - The opening ceremony of the US embassy in Jerusalem took place on Monday amid mass violent clashes between the Palestinians and Israeli servicemen on the border with the Gaza Strip, where over 50 Palestinians were killed by Israeli military and over 2,500 others were injured.

Commenting on the issue, the majority of regional states and a number of Western countries said that the US move contradicted international resolutions and did not fall within the framework of previous Israeli-Palestinian agreements.

The event was timed to coincide with the anniversary of the declaration of the state of Israel, made on May 14, 1948.

The Israeli army has recently deployed reinforcements along the Gaza and West Bank borders in anticipation of escalation of the ongoing violent protests and attempts to penetrate the borders in the run-up to the so-called Nakba Day on Tuesday — the day that commemorates the the 70th anniversary of the Palestinian exodus that occurred as a result of Israel's declaration of independence in 1948.

"Today we dedicated the new #USEmbassyJerusalem, a longtime promise to the American & Israeli people. As Jared shared today 'While many Presidents before him have backed down from their pledge… this President delivered. Because when President Trump makes a promise, he keeps it'," Ivanka said on Twitter.

Many foreign diplomats have been invited to the ceremony, although some have decided not to attend in protest against the relocation.

The ceremony took place amid ongoing protests known as the Great March of Return and riots against the opening of the US embassy in Jerusalem. At least 55 Palestinians were killed in clashes on the border with Gaza Strip, media reported, citing the Gaza Health Ministry.

Thousands of Palestinians were injured by rubber bullets and suffered from the use of tear gas during the Monday protests.

© AP Photo / Adel Hana
Palestinian Death Toll in Gaza Rises to 59
According to the Israel Defense Forces (IDF) press service, about 40,000 Palestinians took part in the mass riots along the border fence throughout the day.

"IDF troops are responding with riot dispersal means and fire in accordance with standard operating procedures. The IDF is determined to fulfill its mission to protect Israeli sovereignty and Israeli civilians… In addition, earlier today, an IDF aircraft & tank targeted two additional Hamas positions in northern Gaza. These strikes were conducted in response to Hamas’s firing on IDF troops in northern Gaza," the IDF press service said on Twitter.

Clashes also erupted between Israeli security forces and Palestinian protesters marching from the Palestinian city of Ramallah toward a security barrier near Jerusalem and in Bethlehem.

Israeli Police spokesman Micky Rosenfeld told Sputnik several people had been detained after clashes near the newly-opened US Embassy in Jerusalem.

Trump announced the decision to move the embassy to Jerusalem and thus recognize it as the Israeli capital in December. Palestine has protested against the move vehemently, stressing that this decision endangered the future of the peace talks between the two Middle Eastern countries.

The United Nations has also been critical of the move, although an emergency session of the UN Security Council failed to issue a statement condemning it, as the United States has a veto right.

The majority of regional countries expressed outrage over the US step, calling it unlawful.

© AP Photo / Murat Cetinmuhurdar/Pool Photo
Turkey Recalls US, Israel Ambassadors Over Gaza Slaughter
Jordanian Minister of State for Media Affairs and Government Spokesperson Mohammed Momani said, as cited by the Petra news agency, that the US decision violated the UN charter, as well as the UN Security Council (UNSC) resolution 478 that recognized East Jerusalem as an occupied city.

Egyptian Foreign Minister Sameh Shoukry said that the US decision on Jerusalem contradicted international resolutions and did not fall within the framework of the agreements reached between the Palestinian Authority and Israel.

The opening of the embassy is an obstacle to the peaceful settlement of Israeli-Palestinian conflict, the Egyptian foreign minister stressed.

Ankara has also condemned the US decision and called on the international community to show some reaction to the deadly events in the Gaza Strip.

"Every Palestinian killed by Israel in the occupied territories today is another dark spot, another crime added to Israel’s wall of shame. The so-called civilized world must be ashamed of its silence in the face of this systematic barbarism," Turkish presidential spokesman Ibrahim Kalin said on Twitter.

Also, several thousand people protested in the Turkish city of Istanbul against the Israeli actions in the Gaza Strip, local media reported on Monday.

The Iranian authorities have criticized the relocation of the US embassy to Jerusalem and accused Israel of mass killings of Palestinians.

Arab League chief Ahmed Aboul Gheit earlier in the day reportedly criticized the countries that participated in the celebration of the move.

EU foreign policy chief Federica Mogherini, on her part, called on Israel and Palestine to show restraint in order to avoid new victims in the ongoing clashes between Israeli servicemen and Palestinian protesters on the Gaza Strip border.

© AFP 2019 / SAID KHATIB
‘Engineering the Demography’: Israel Uses Both Bullets and Laws to Erase Palestinians
Mogherini noted that any further escalation of the situation would cause "further unspeakable sufferings to both peoples, and will make the perspective of peace and security even more remote."

"The EU remains firmly committed to continue working with both parties and with its partners in the international community towards a resumption of meaningful negotiations aimed at a two-state solution, based on the 4 June 1967 lines and with Jerusalem as capital of both," Mogherini added.

Paris disapproves of the US decision to relocate the embassy as it goes against the international law, French Foreign Minister Jean-Yves Le Drian said in a statement.

"After several week of violence, as we see the number of Palestinian victims in the Gaza Strip still grow today, France is once again urging the Israeli authorities to show good judgment and restraint in using force, which should be strictly proportional," Le Drian said.

Spokeswoman for the German Foreign Ministry Maria Adebahr on Monday reiterated Berlin's concerns over the embassy move and confirmed that German Ambassador to Israel Clemens von Goetze would not attend the opening ceremony.