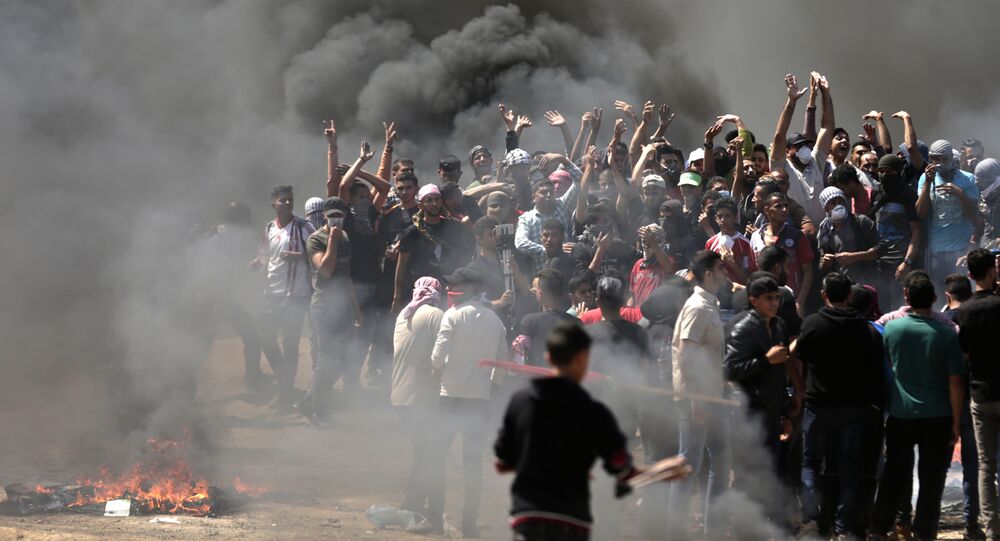 WASHINGTON (Sputnik) - Israel’s ruthless crackdown on Palestinian protestors on its border with Gaza has had the full support of the United States because it is key to President Donald Trump’s prospects in the 2020 election, analysts told Sputnik.

The opening ceremony of the US embassy in Jerusalem took place earlier on Monday amid mass violent clashes on the border with the Gaza Strip, where more than 50 Palestinians were killed and another 2,500 injured by Israeli defense forces.

"The Israeli killings have the full backing of the United States," University of Pittsburgh Professor of International Affairs Michael Brenner told Sputnik on Monday. "There is no peace process."

© AP Photo / Adel Hana
Palestinian Death Toll in Gaza Rises to 59
The killings would soon be forgotten because of divisions within the 28-nation European Union (EU) and because Russia and China were content to see the United States get further entangled in the unending conflicts of the Middle East, Brenner advised.

The moving of the US Embassy in Israel to Jerusalem was the culmination of a process going back at least to President George W, Bush in 2001 since when the United States had fallen progressively more under the influence of Israel and Saudi Arabia, Brenner stated.

Washington’s European allies would not dare to challenge its leadership and tacitly supported US policies anyway, Brenner observed.

"The Europeans are completely lacking in any political will and, in any case, agree with the overall American assessment of interests in the region — Palestine as well as Syria, Iran [and] Yemen," he said.

The Unite Nations was limited in its effectiveness only to issues that the United States and its allies supported, Brenner pointed out.

Retired neurosurgeon and political commentator Professor John Walsh told Sputnik the Embassy move was a victory for US neoconservatives or neocons. He also said Trump wanted their support in his confrontation with Special Counsel Robert Mueller and for his reelection bid in two years’ time.

"Trump needs the neocons and their many allies to support him in his coming encounter with Mueller and the 2020 election," he said.

By moving the US Embassy in Israel to Jerusalem and ditching the 2015 nuclear agreement with Iran, Trump had secured the support of Israeli Prime Minister Benjamin Netanyahu and therefore of most neocons, Walsh noted.

The embassy move also freed Trump to make concessions to North Korean leader Kim Jong-U at their planned summit meeting in Singapore next month, Walsh added, because Israel does not care about Korea.

© REUTERS / Ibraheem Abu Mustafa
World Reacts as US Opens Embassy in Jerusalem Amid Mass Deadly Clashes on Gaza Border
Walsh said he expected Netanyahu and his neoconservative allies in the United States to accept US moves to make peace with North Korea in return for getting the US armed forces to launch an attack on Iran.

On March 30, Palestinians launched the Great March of Return protests near the Gaza Strip border demanding that refugees be allowed to return to their homes in what is now Israel. Tuesday marks the 70th anniversary of the Palestinian exodus that occurred as a result of Israel's declaration of independence in 1948.

In December, President Donald Trump recognized Jerusalem as the capital of Israel and ordered the US embassy to be relocated there from Tel Aviv. The decision fuelled unrest across the Middle East and has been condemned by most of the international community.