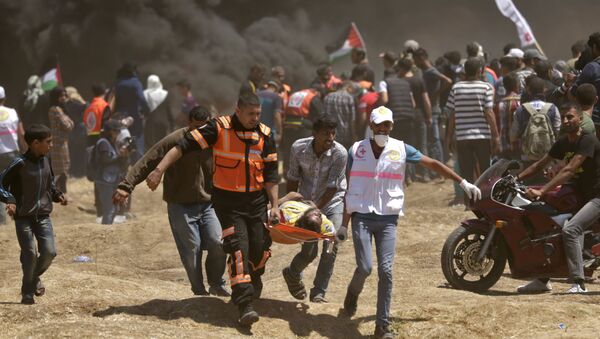 Amid Monday's protests against US embassy's relocation to Jerusalem, at least 52 Palestinians have been killed and over 2,400 wounded by Israeli fire, according to the latest date from the Gaza Health Ministry.

Reacting to the recent escalation of tensions along the Gaza Strip border with Israel amid protests against US embassy's relocation to the holy city, Palestinian leader Mahmoud Abbas has refused from any Washington's mediation in the Israel-Palestine conflict.

"With this step, the US administration has canceled its role in the peace process and has insulted the world, the Palestinian people and the Arab and the Islamic nation and it has created incitement and instability," Abbas spokesman Nabil Abu Rdeineh stated.

Later in the day, Mahmoud Abbas announced a three-day mourning in connection with the death of dozens of Palestinians on Monday and a general strike on the occasion of the 70th anniversary of the Nakba (national catastrophe), the WAFA state news agency reported.

A similar position has been voiced by Permanent Observer of Palestine to the United Nations Riyad Mansour earlier in the day, who stated that the Palestinians believed there was no chance of engaging in the US-led peace process amid the killings of Palestinians by Israeli forces in the Gaza Strip.

When asked whether Palestine was willing to engage in the peace process, Mansour said:

"There is no chance for engaging. What we are talking about today is this massacre. And it is happening at the same time while there is a celebration by a certain number of officials in Jerusalem."

The Palestinian envoy demanded an investigation into the killings of at least 52 Palestinians and over 2,000 injured on the Gaza Strip border by Israeli forces during protests on the anniversary of the declaration of the state of Israel.

According to the envoy, Palestine believes there is no chance of engaging in the US-led peace process amid the killings of Palestinians in the Gaza Strip.

The comments refer to the recent developments in the Israeli-Palestinian conflict: the opening of the US embassy in Jerusalem, which US President Donald Trump has called a factual Israeli capital, thus outlining his position on the issue.