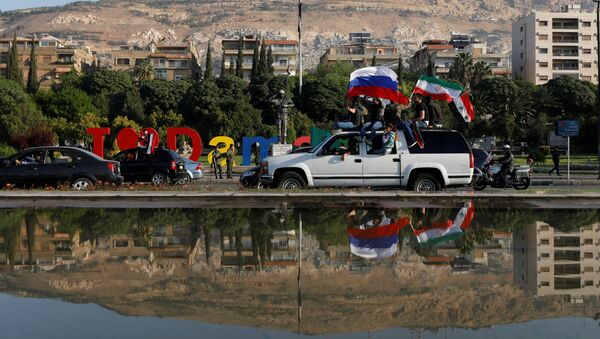 Commenting on the Western countries' missile attack against Syria on April 14, the head of the Geopol Consulting think tank, told Sputnik that the US, the UK and France are seeking to disrupt Russia's clout in the region.

"Regardless of whether a poison gas was used [in Syria's Douma] or not, it was an excuse for the United States, France and Britain, as well as more globally for NATO, to try to torpedo Russia's victory in Syria," said Alexandre Del Valle, head of Geopol Consulting.

According to him, the strikes against Syria "are an obvious violation of international law" aimed at weakening legitimate authorities.

"Both in Iraq and Libya, the West uses moral arguments to hide its policy of neo-imperialism in the Middle East in order to prevent Russia from strengthening its position in the region," Del Valle stressed.

His remarks came after the US, the UK and France launched more than 100 cruise and air-to-surface missiles on a spate of civilian and military targets in Syria in response to an alleged chemical attack in the Damascus suburb of Douma on April 7.

READ MORE: US Conducted Missile Strike Against Syria Regardless of Its Own Laws — Moscow

The Russian Defense Ministry said that 71 missiles out of 103 were intercepted by Syria's air defense systems; Russian air defense units did not participate in the interception because none of the missiles had entered their areas of responsibility.

Russian Defense Ministry spokesman Igor Konashenkov told a news briefing on Friday that the ministry had enough evidence to conclude that the planned provocation using chemical weapons was carried out in the Syrian city of Douma in Eastern Ghouta on April 7.

According to him, the provocation was organized by Western-backed NGOs, including the White Helmets, in a bid to prompt the US to stage a missile strike on Syria.

The ministry expressed hope that the OPCW [the Organization for the Prohibition of Chemical Weapons] mission, which kicked off on Saturday, would not fall under the pressure of third parties and would conduct an objective investigation of the alleged attack.

In another development on Friday, the Syrian ambassador to the United Nations, Bashar Jaafari, said that Syria had helped the OPCW team conduct its probe in a transparent manner.

Russian Admiral Explains Why Western Strike on Syria Was Poorly Coordinated
Damascus has repeatedly rejected Western accusations of having attacked civilians with chemical weapons in Douma. Russia, which has been supporting Assad's forces, has also refuted the allegations against the Syrian government, pointing to the lack of evidence.

Moscow calls for a meticulous probe into the alleged Douma chemical weapons attack, which it says should be completed before any conclusions are drawn.

The US-led coalition has been launching airstrikes on Syrian soil since 2014, in an anti-Daesh mission that was approved neither by the Syrian government nor the UN. At the moment, an estimated 2,000 US troops are deployed in Syria.

The views and opinions expressed by Alexandre Del Valle are those of the journalist and do not necessarily reflect those of Sputnik.