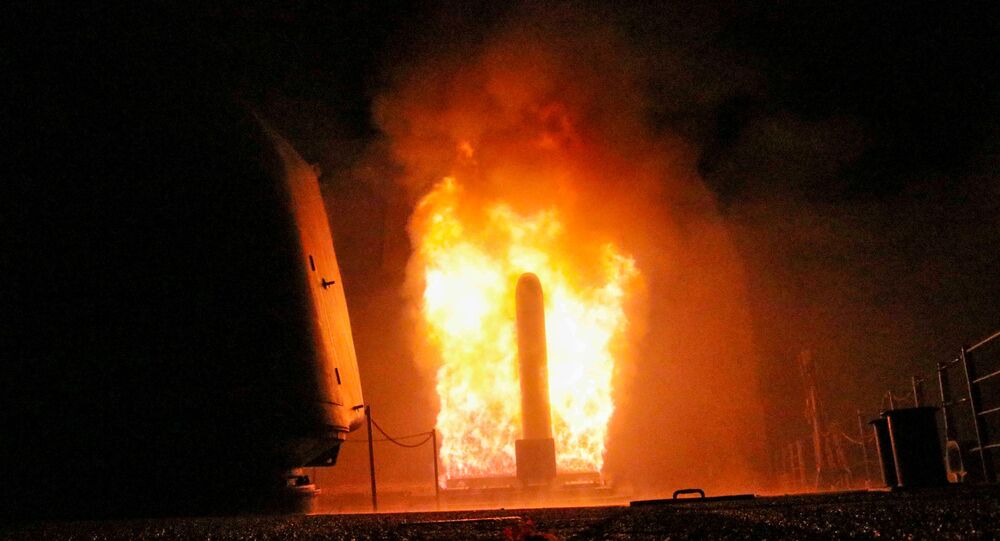 Syrian Ex-Diplomat on Western Missile Crusade: 'It's Loss for Them, Not for us'

Hundreds of Syrians gathered in city squares across Damascus on Saturday morning in defiance of US, UK and French airstrikes. Sputnik spoke to Dr. Bassam Abu Abdallah, the Director of the Center for Strategic Studies at Damascus University and former Syrian diplomat, who said that the Syrian people were not afraid of a US-led coalition attack.

Sputnik: What is the situation in Damascus now?

Dr. Bassam Abu Abdallah: I can tell you that everything was normal, nothing changed absolutely not before or after. In the morning I was working at home and I read usually at night and when it started many Syrian people took pictures of the rockets, especially the Russian missiles which the Syrian army used defended perfectly, and at the same time I did not feel that the people were afraid, not before or after, opposite of that, people went to work, the arrived at his office on time as every day, so nothing happened, and if they think we are afraid, absolutely not, normal life is going on everywhere.

© AP Photo / Matt Dunham
Israel's Netanyahu Expresses 'Total Support' for Syria Strikes
I’m talking from Damascus and I followed the situation and I was in Umayyad Square in the center of Damascus at 5:30 in the morning and then many people joined,  and our TVs are working, so nothing happened, we’re not afraid of that, I think the American, the British and the French they know that they’re lying and they should know that they’re facing people who have been fighting terrorism for more than seven years, with the support of their allies, especially the Russian Federation, and we are winning this war, and this war is not against anyone but it’s against terrorism, and we should protect the civilians from this: civil society including the Western countries who attacked Damascus or Syria aggressively this morning.

Sputnik: How is the population reacting to what happened, you said that they were going to work and so forth, but what are people saying?

Dr. Bassam Abu Abdallah: People are saying that they expected that Trump has prepared a huge statement and nothing happened. I think the best comment is not from Syrian but from the Israeli newspaper Yedioth Ahronoth (2.16) when they say that the rockets were very nice, very beautiful and very smart, but there's also zero, this is I think is the best comment. So nothing changed, not in the military aspect, not in the political aspect, it did not affect the normal life of civilians, so nothing.

© AP Photo / Julie Jacobson
Russian UN Envoy Calls US 'Aggressor-State' as Haley Says Time for Syria Talks Over (VIDEO)
They just showed themselves that they are rogue states, they showed themselves that they are outside international law and the charter of the United Nations, and they showed themselves that they are weak, and they’re not a superpower, and they’re not respectable states, and they’re not respectable leaders because inside these countries like Britain, the people are divided, in the United States the administration is divided, so these states they are suffering from a huge change in international relations, with the rise of the Russian Federation, the rise of China, Iran and the resistance of the Syrian people. They are astonished but they think it’s getting better and step-by-step we will defeat in Syria the terrorism of ISIS (Daesh)* or other terrorist groups. The last battle was in the Eastern part of Ghouta and I think that everyone observed that with participation of the Russian Federation, things are going well and we are going forward in defeating terrorism in Syria. And at last, for all civilians around the world, at the same time we will continue to push the American, French and the British to leave Syria.

Sputnik: How long do you expect the American presence in Syria to continue?

Dr. Bassam Abu Abdallah: We expect everything, but I think that inside the United States, between Pentagon, the Department of State and the administration of Trump there are differences. When President Trump met with his national security team, they had a lot of differences because they were afraid of the reaction from Russia, they don’t know the actions of Iran, they don’t know the actions of others, and at the same time they have only lies depending on their aggression. So we’re expecting everything, but we feel that we're strong enough, and this experience, this morning when our air defense systems downed more than 75 of their rockets, it’s a loss for them, not for us.