Russia had neither the motive nor the intention to poison Sergei Skripal, a former spy who has been living in Britain since 2010, political scientist Andranik Migranyan writes for RIA Novosti, presenting his own view on who could have benefitted from the controversial incident in Salisbury.

Regardless of Theresa May's claims that "there is no alternative conclusion other than that the Russian state was culpable for the attempted murder of Mr. Skripal and his daughter" using a "weapons-grade nerve agent of a type developed by Russia," it is obvious that Russia had neither intention nor motive to poison the former spy, Andranik Migranyan, a Russian political scientist and professor at the Moscow State Institute of International Relations, wrote for RIA Novosti.

On March 4, Wiltshire police found Sergei Skripal, 66, and his daughter Yulia, 33, unconscious on a bench near the Maltings shopping center in Salisbury. The two were reportedly poisoned using А-234, a chemical substance, and remain hospitalized and in critical condition.

There are at least five reasons why Moscow did not poison the ex-spy, according to the academic.

First, Skripal, formerly known as a MI6 agent codenamed "Forthwith," was not a defector. In 2004 he was arrested in Russia and sentenced to 13-year prison term for espionage on behalf of the UK in 2006. However, in July 2010 he was pardoned and swapped along with other three individuals with 10 Russian secret agents including Anna Chapman, exposed in the US at the time.

Second, "Forthwith" posed no threat and knew virtually nothing beyond what he had already provided to the MI6 before his arrest, Migranyan pointed out, adding that otherwise, Moscow would not have released the former British asset but replaced him with someone else. 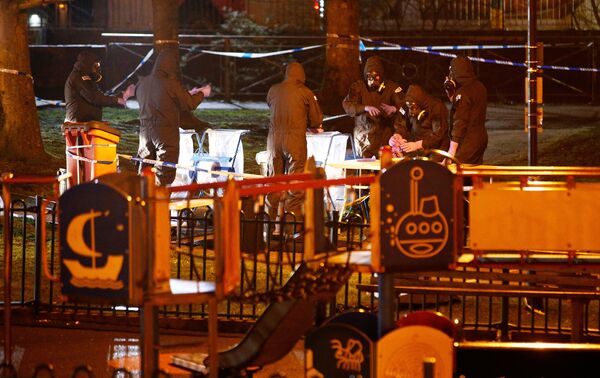 Members of the emergency services wearing protective clothing work next to a children's play area near the bench where former Russian intelligence officer Sergei Skripal and his daughter Yulia were found poisoned in Salisbury, Britain, March 13, 2018
© REUTERS / Henry Nicholls

Third, following the swap, Skripal has most likely been supervised by British special services. If the former spy had been engaged in any activity potentially dangerous for Russia, London would have immediately announced — at least in general terms — Moscow's supposed motive to liquidate Skripal, the academic opined.

Fourth, the poisoning of the 66-year old former agent and his daughter was by no means in the interest of President Putin and Russian intelligence services especially on the eve of the 2018 presidential election and ahead of the FIFA World Cup event in the country, Migranyan highlighted.

Fifth, the Russian leadership has always exercised a pragmatist approach to the country's foreign policy and global affairs and would not have shot itself in the foot by attacking the ex-spy in Britain amid simmering political tensions between Moscow and the West, the academic concluded.

The question then arises as to who could benefit from the incident.

UK Reportedly Wants to Prod EU to Slap Sanctions on Russia Over Skripal Case
The academic surmised that the Skripal case could have been used by the US and Britain to further demonize the Russian leadership and exert considerable pressure on the Kremlin amid the election.

"Being unable to effectively interfere in Russia's domestic politics and the electoral process through their structures inside the country — as most 'agents of foreign influence' have been put under surveillance by Russian special services, Anglo-American intelligence agencies decided to conduct an operation to discredit Russia and Putin and cast a shadow over the Russian election and the legitimacy of the presidency in general," Migranyan believes.

Meanwhile, Vladimir Ermakov, head of the non-proliferation and arms control department at the Russian Defense Ministry, stated Wednesday after a meeting with foreign envoys on the Skripal case: "Either the British authorities are unable to protect [their citizens] from a terrorist attack on their territory or staged the attack themselves."

World
Russian Embassy in US: 'Maybe Moscow is Also to Blame for Snowfall in DС, NY?!'
Ermakov expressed concerns over London's unwillingness to provide the Russians with consular access to Skripal's daughter, which violates international laws.

He highlighted that Moscow asked the British authorizes "to provide all the information" about the incident. However, "we don't get anything," Ermakov added.

On March 19, experts from the Organization for the Prohibition of Chemical Weapons (OPCW) arrived in London to get the samples of the nerve agent that was allegedly used to poison Skripal and his daughter. According to OPCW Director-General Ahmet Uzumcu, It will take at least three weeks to study the substance provided by the UK.

Moscow has repeatedly proposed conducting a joint investigation with London, however, the British authorities refused to cooperate.

Before the investigation of the case has been completed, British Prime Minister Theresa May blamed Moscow for what she called an attempted murder and initiated the expulsion of 23 Russian diplomats from the UK. In response, Moscow booted out 23 British envoys.