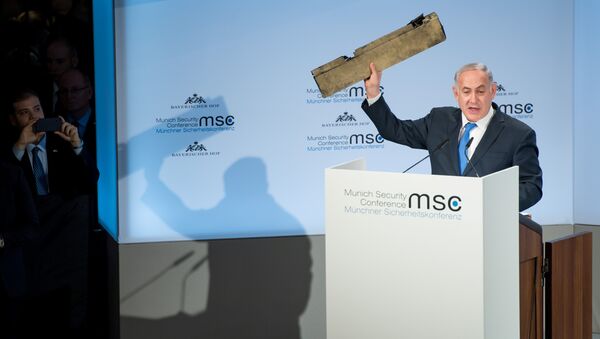 Tensions between Israel and Iran have been running high since the Israeli armed forces intercepted what they said was an Iranian drone and conducted a series of attacks on military objects in Syria.

"Iran seeks to dominate our region, the Middle East, and seeks to dominate the world through aggression and terror. It is developing ballistic missiles to reach deep into Europe and to the United States as well… This is, in my judgment, the greatest threat to our world, not just to Israel, not just to our Arab neighbors, not just to Muslims far and wide, but to you as well," Netanyahu said at the Munich Security Conference.

The Israeli prime minister also stressed that "once armed with nuclear weapons, Iran's aggression will be unchecked and… will encompass the entire world." That is why, according to Netanyahu, Iranian nuclear deal should be scrapped if Tehran continues its nuclear enrichment research.

Iran Deal Revision Impossible Amid Mistrust Between Tehran, Washington - Moscow
In July 2015, Iran signed the nuclear agreement with the European Union and the P5+1 group of nations comprised of the United States, Russia, China, France and the United Kingdom plus Germany. The agreement stipulates a gradual lifting of sanctions imposed on Iran in exchange for Tehran maintaining the peaceful nature of its nuclear program.

In late October, US President Donald Trump refused to re-certify the nuclear deal, accusing Tehran of violating the spirit of the agreement. Despite the fact that Trump decided not to contest Tehran's compliance with the deal at the international level, he did not exclude a possible withdrawal from the deal if the agreement was not improved. Israel welcomed Trump's stance on the deal.

On Iran's Military Presence in Syria

Netanyahu also urged Iran not to test Israel's resolve and noted that Israel would act against Iran if necessary and not just its proxies.

Syria of Discord: Iran, US Clash Over Military Presence on Ground
Tehran has been backing Damascus in its struggle against terrorist groups in the course of the deadly conflict that broke out in 2011. Within the framework of Iran's support Tehran has sent military advisers to train troops loyal to Damascus.

Israel, however, viewed Iranian activities as a threat to national security. It has repeatedly warned that Iran was allegedly building a permanent military base south of country's capital of Damascus to establish permanent presence in Syria and expand its influence in the region.

Hostility in Relations Between Iran and Israel

The Israeli prime minister's speech comes after the incident with an alleged Iranian drone launched from Syria, which was intercepted by the Israeli helicopter after it crossed into the Israel-held Golan Heights on February 10. Following this attack, the Israeli Air Force (IAF) struck what it said were Iranian targets in Syria. The Israeli moves prompted retaliatory fire from the Syrian air defense systems.

Israel Believes Destroyed Up to 50% of Syrian Air Defenses in Strike - Source
Iran slammed Israel's claims that an Iranian unmanned aerial vehicle had invaded the country's airspace from Syria as "ridiculous," stressing that "Iran only provides military advice to Syria."

Netanyahu stated that by striking Syria powerfully, Israel’s forces have demonstrated that they would continue responding to every aggressive action against their country.

During the telephone conversation with Russian President Vladimir Putin, the Israeli prime minister said that Israel has the right to self-defense and will defend itself against any attack or attempt to violate its airspace.

Russia, a guarantor of the Syrian ceasefire regime alongside the two other guarantor states Iran and Turkey, condemned Israel’s attacks on Syria, noting the danger of escalating tensions around and within the Syrian de-escalation zones.