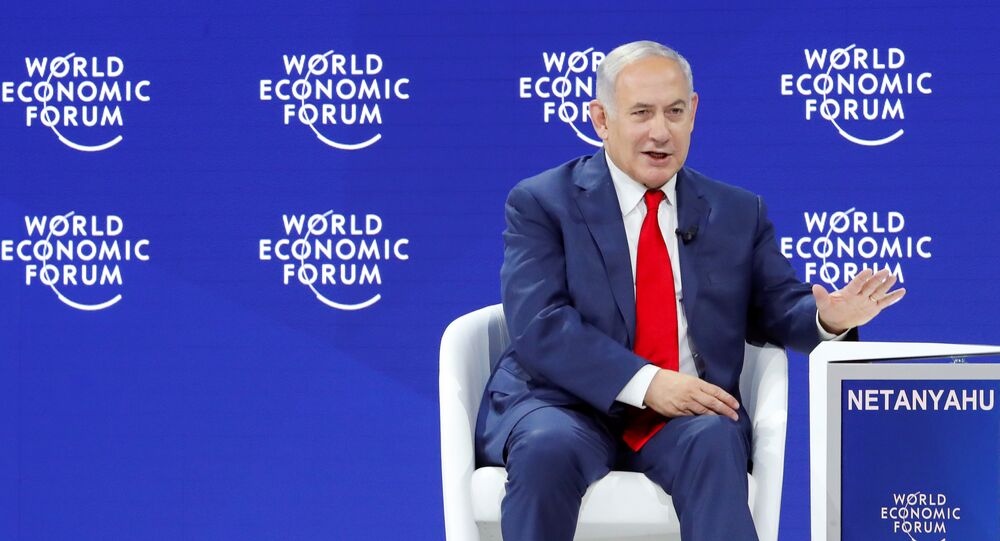 Israeli Prime Minister Benjamin Netanyahu has described Israeli relations with other Middle East countries and shared his skepticism on the Iran nuclear deal.

Speaking to leading CNN host Fareed Zakaria, who served as a moderator at one of the sessions of the World Economic Forum, Israeli Prime Minister Benjamin Netanyahu has revealed why, from his point of view, the world shouldn't worry that Iran might develop nuclear weapons in the immediate future.

"Iran is in no hurry to build nuclear weapons because of the fear of being subjected to new sanctions," Netanyahu said to CNN on Sunday. "If they begin to speed up the creation of a nuclear bomb, other states will stop them. In any case, we will do so," Netanyahu warned.

The Israeli prime minister has reiterated the country's fears over the Joint Comprehensive Plan of Action (JCPOA), saying that the essence of the deal might allow Iran to build an even more substantial nuclear capacity.

"According to the agreement, they [the Iranians] will be able to produce a hundred or two hundred nuclear bombs, and even to force events and build up a whole nuclear potential without interference, despite this international agreement. In fact, this agreement rather allows Iran to do this. That is why it is defective," the prime minister explained.

In previous statements, Netanyahu urged to preserve the agreement, an agreement which is considered to be a great diplomatic victory of former US President Barack Obama, but underscoring the need to make amendments to it, following Trump's warnings to withdraw.

The long-cherished nuclear deal, signed in July 2015 between European Union, Iran and the P5+1 group of nations — the United States, Russia, China, France and the United Kingdom plus Germany — stipulates a gradual lifting of sanctions imposed on Iran in exchange for Tehran maintaining the peaceful nature of its nuclear program. The International Atomic Energy Agency (IAEA) has confirmed Tehran's compliance with the deal in nine reports.

Despite Obama's great efforts to reach the agreement with Iran, US President Donald Trump decided to brush it aside in October, refusing to certify that Iran was in compliance with the accord and insisting on amendments to it.

His controversial decision raised fears among states that participated in the diplomatic achievement, especially mindful that the International Atomic Energy Agency (IAEA), which monitors the implementation of Iran nuclear deal, has repeatedly confirmed Tehran's compliance with the terms set by the multilateral agreement.

Reemphasizing his position on the issue, Trump has suspended restrictions on Iran for another 120 days to remain in the deal so that the United States and Europe could fix "significant flaws" in it.

Perfect Accord Between Israel and other the Middle East Countries

The Prime Minister has described Israel's good neighborliness with the other Middle East countries.

"I'd agree that there is an alignment of Israel and other countries in the Middle East, that would have been unimaginable ten years ago. And certainly in my lifetime I never saw anything like it… So, it's an extraordinary thing," Netanyahu said, responding to the questions posed by CNN host Fareed Zakaria.

Netanyahu has also revealed the secret of such a strong alliance.

"It starts with a common concern, with a common enemy, which is radical Islam. Either of the radical Sunnis, Daesh [terror group, banned in Russia], before that — al-Qaeda," the minister explained.

According to him, the alliance with the neighboring countries has helped to prevent dozens of terrorist attacks not only in the region, but all over the world, saving the lives of "many, many citizens".

After that, the Israeli top politician once again touched on the Iranian issue, but from a different angle, noting that the Islamic Republic was "another common concern" of the Middle East allies.

However, he noted that Arab countries want to borrow civilian technologies from Tehran in the areas of "in water, in agriculture, in IT and other areas".

"I view that as a great promise for peace, I think that changing attitudes, not only on the level of regimes. We poll the Arab world. We see the beginning of changes, significant changes in the attitude toward Israel and the Arab publics….That's hope. That's a future of peace." Netanyahu concluded.